Slowly but surely, small businesses are getting their chance to give influencer marketing a shot. In its early days, influencer marketing was strictly the domain of large brands with household names (and house-sized marketing budgets to match). The first influencer marketing platforms were expensive, with some of the more sophisticated offerings carrying a monthly subscription fee of a few thousand dollars. Of course, as with anything new and expensive that catches on to the mainstream, the price for access to a discovery, management, and analytics platform has come down considerably.

Not considerably enough, though, if you’re a small, family owned business. Even with some of the best solutions coming down to a more accessible range of $500 - $800 a month—that’s still more than a small business can swing in most cases. There have been, in the past couple of years, several attempts at low-cost influencer marketing platforms. This is especially true with marketplaces, which don’t need to rely that heavily on advanced algorithms and AI, and are more well suited to pay-as-you-go type plans. The emergence of several platforms offering subscriptions under $100 a month—as well as others that rely on flat fees per campaign, or just commissions on payments to influencers—has been great news for small, local businesses. Mostly. Almost always, the one thing that’s missing from these platforms is data. Or, more specifically: analytics.

Enter Analisa, the Instagram analytics platform that’s poised to change the game for a lot of businesses who couldn’t afford to do influencer marketing right.

If you’ve ever wondered what the difference was between data and analytics, Analisa illustrates it perfectly. The new, low cost marketplaces provide you with data: they can tell you an influencer’s follower count, and how many likes/comments a post got. They’ll do the simple math and provide an engagement rate, and—well, that’s about it. What you’re getting is just numbers—raw data—and these numbers are things you could find out just by looking at the post. With Analisa, you get analytics. Yes, you’ll get raw data, like the number of likes, but you’ll also have that raw data analysed so you’ll understand that most of those likes happened on Tuesday and Saturday, at 3PM and 10AM, respectively. That’s a basic explanation, and if it doesn’t make sense to you yet, it will as we go through The Details and list all that you can learn through Analisa.

As you read ahead, keep this in mind: Analisa is using the same very basic, and publicly available, data that the low-cost platforms do. What they do with it goes much, much deeper. And they’re doing it at a price point that’s in just about any budget.

Analisa
Small businesses usually can’t get their hands on the kinds of insights and data that Analisa offers, and for that reason alone it’s worth a look. The quality of the analysis and the price point of their Premium account are two reasons it’s worth subscribing to.
Pros and Cons
Enterprise level insights at entry level price
Posting activity data reveals when posts get the most engagement
Hashtag reports can be used for pre-campaign research and post-campaign reporting
Limited audience data lacks important psychographics
Multi-user plans with no team/collaboration tools
Best for: Small Brands
Ratings
Features
4.0
Ease of Use
4.5
Reporting
4.5
Overall Score
4.3

Analisa offers two levels of service through a no-contract subscription 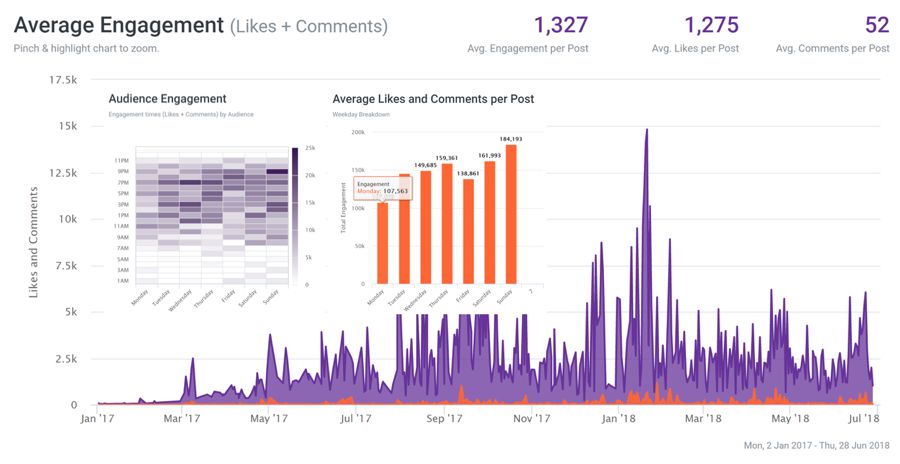 There are two kinds of reports you can run with an Analisa, and each has its own benefits. Running an @account report can give you in-depth analysis on an influencer’s profile and activity, while #hashtag reports can be used to monitor campaigns. For each report you’ll get a variety of analytics to help you gain deeper understandings of the subject: 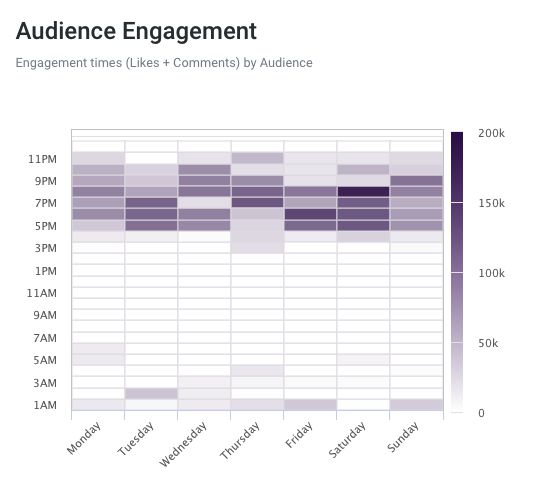 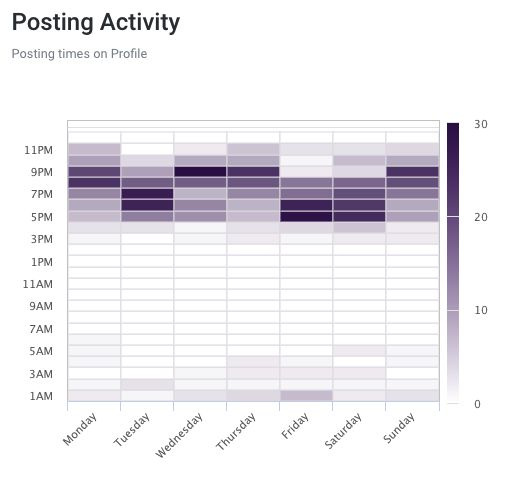 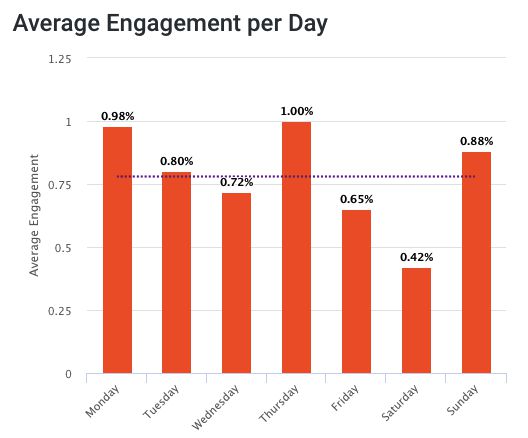 In both the @account and #hashtag reports, you can also see the top posts for each. If you’re looking at an influencers analytics, the top posts will their personal best performers. For hashtags, those are the ones that did the best for a campaign.

Additionally, the #hashtag report includes one more set of data, and that one goes into depth about the influencers performance. Here you can see which influencers did the best, and which ones you’ll probably want to pass on next time around. Or, if you’re being extra strategic about things, you could do a #hashtag report on your competitors as a way to find influencers for yourself. 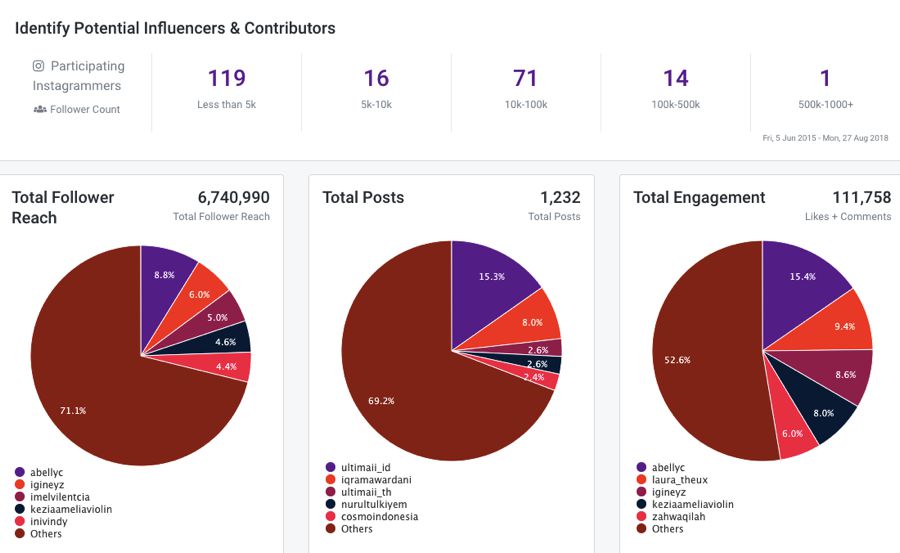 At this point, you should be able to identify what the difference between data and analytics is. Knowing that, it’ll make more sense when I level my one criticism: Analisa needs more data. And by “more data,” I mean “audience data,” which is not as easy to come by, but that what makes it all the more precious.

As marketers increasingly depend on social media for business growth, there is a growing need for measurability and accountability in social media marketing to equip businesses with data- informed decisions and avoid potential frauds.  Very notably in the exploding influencer marketing industry, where Unilever’s ex-chief marketing officer Keith Weed once called for a crackdown on influencer follower fraud and lack of data insights. To solve this industry-wide problem, Analisa.io has launched an Instagram Follower Analytics tool that lets users analyse any public Instagram Profile’s Follower Demographics such as Age, Gender, and Country Location, as well as measure Follower Authenticity to detect suspicious or dormant followers. Analisa.io’s Follower Analytics works on any public Instagram Profile, and lets users study audience demographics to find brand relevance, while auditing suspicious followers to avoid potential frauds. 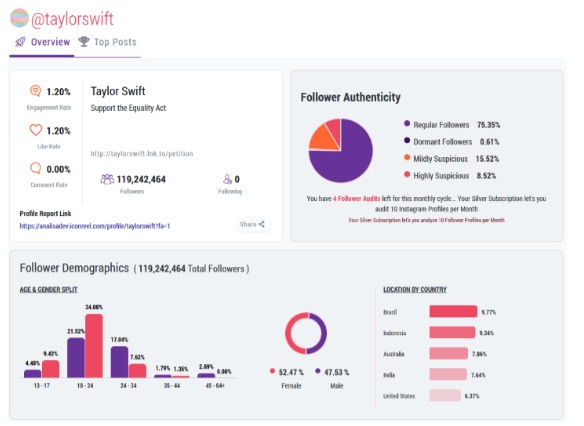 With all that’s great about Analisa, there is one area where they can improve: audience data. As mentioned in the Overview, Analisa is dealing with all publicly accessible information. You don’t need API access to Instagram to find out things like total posts, engagement, or the time and day when something is posted. That Analisa did so much with the same data as other low-cost platforms is truly impressive. Now, I’d like to see them take it a step further and start getting at the demographics and psychographics of the audience. This is truly invaluable information, and if they can figure out a way to get it without having to raise their costs too much, Analisa could become a truly invaluable tool. For small businesses, though, it might already be indispensable. This is still more business intelligence than $69 a month has ever gotten you, and to think you wouldn’t benefit from it is, well...not intelligent.