Notice: BrandNew has filed for insolvency.

Founded in 2012, Brandnew is no longer, in fact, brand new. Measured in influencer marketing years, it’s actually old enough to have been in the game since before the phrase “influencer marketing” was even part of the vernacular. Maybe that’s why Brandnew’s website announces itself as a “Creator Marketing” service. It also begs the question why we’re all not saying “Creator Marketing,” which is easier to say, but that’s a topic for another post.

In any case, Brandnew is also old enough that their initial foray into creator marketing is a long way from where the industry stands now. In 2013, Brandnew promoted itself as the company with “a plan” for advertising on Instagram. This was before Instagram had any reputation for being the social channel for brands to market on, before brands could even advertise on IG, for that matter. As this write-up notes, the plan had “no formal pricing structure,” and creators could expect to earn unspecified amounts of money, “depending on the nature of the campaign, overall influence of publishers, and type of photo used by the brand.” Other than all the required details, it was a pretty solid plan.

We can laugh about this now, because Brandnew has come a very long way since the early days. In some ways, their progression mirrors the influencer marketing industry as a whole. They started at a point of knowing that there was real opportunity there, but maybe not entirely sure how to capitalise on it—this could easily describe all of influencer marketing at that time. But now, Brandnew IO—like the industry itself—knows exactly who they are, which puts them in a position to offer more than just a self-service SaaS platform for brands and agencies.

Influencer marketing, and the management of it, is now a known quantity. That doesn’t mean there won’t be more innovations to come; instead, it means that the industry has collectively recognised what constitutes a helpful management platform. More and more, competing platforms are indistinguishable from one another when you compare them feature by feature—it’s when you get into the “how” of what they’re doing where the differences are noted. This is how it is with Brandnew IO. As a start-to-finish discovery and management tool, it’s solid—there really isn’t much missing, but that’s no longer enough to give them any kind of edge over competitors.

Use Brandnew, though, and you’ll understand why brands as big (and as diverse) as Coca-Cola, L’Oreal, Volkswagen, and Spotify chose to go with them. A lot of its charm stems from the interface, and please understand that “interface” doesn’t just describe how the software looks. It’s also how it behaves when you interact with it, and how the information is organised,  and how intuitive it all is to use. All of that is present, and it makes sense why. Before offering a self-service platform, Brandnew developed this software in-house to help their own campaign management go smoother. They refined over time, adding features that addressed their needs as a company that needed to find and organise influencers to execute campaigns they’d design and manage. They were their own first beta testers, and the users they were developing for. Eventually they got to a point where they realised, “Hey! We’ve got a product here.”

And I’m guessing you want to hear more about that already. So, on with the show.

There are subscription levels offered, each with progressively more features available.

As with all influencer marketing platforms, Brandnew starts with influencer discovery. Or, rather, it starts with creator discovery. The database of creators to be found within Brandnew IO nubers over 170,000—which is quite a high number when you consider it’s an opt-in system. The number seems even bigger once you know that all their creators are vetted by humans on individual basis. If you’re of the opinion that the number is low, bear in mind also that—on average—Brandnew rejects 9 of every 10 applications from would-be creators. The interest is there on the creator side, but the company is pretty vigilant on maintaining quality standards.

Even in cases where customers bring in their own influencers, the team at Brandnew will review each one. While they’ll never stop a brand from working with who they want to work with, they will alert customers if they notice any red flags about someone brought in this way. If they find evidence of fake followers or controversial content, for example, they’ll let it be known that this person might not be a good fit. Ultimately, the decision belongs to the brand, but it’s great to know there’s a team working behind-the-scenes to make sure you’re working with high quality creators. 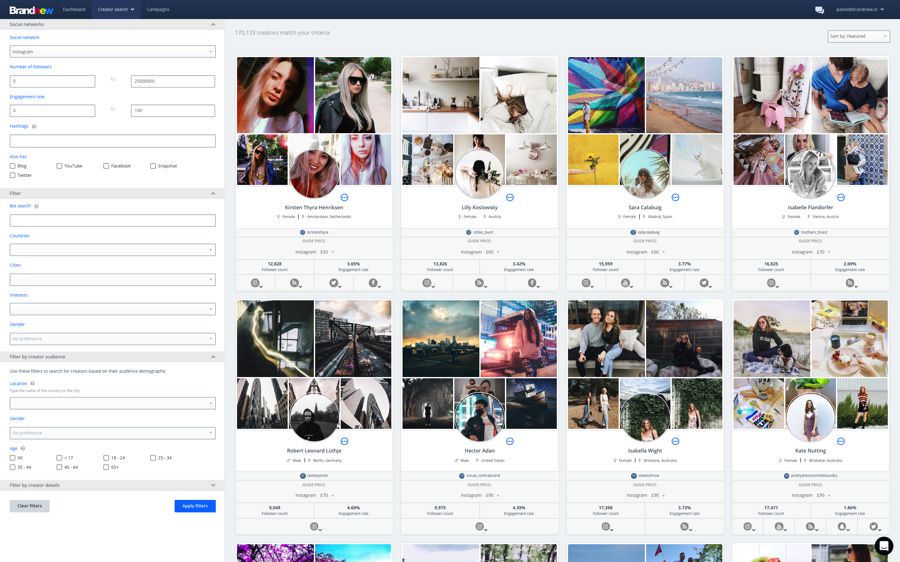 Searching for the talent is pretty straightforward, with the ability to search by the creators’ and their audiences’ demographics. You can, of course, filter by follower count, social channels, engagement rates, keywords in bios, and hashtags—all what you’d expect. Oddly, though you can get psychographic information on each influencer’s audience—you’ll get a breakdown by percentage of audience interests like fashion, sports, etc.—you can’t search or filter using these criteria. 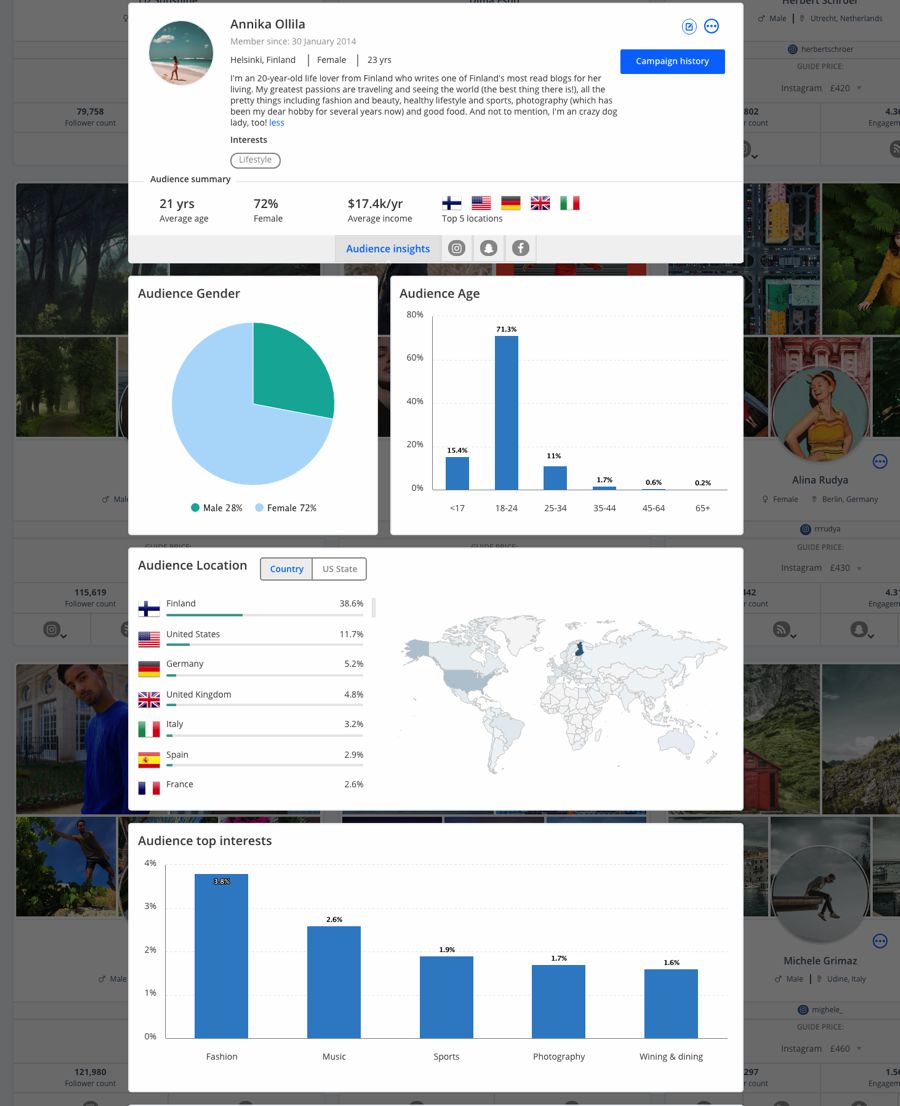 Still, when you find creators who interest you, you can organise them into groups according to whatever criteria you like. Working with groups in Brandnew is more than an organisational tool, because you also view all their data aggregated as a single set. Put 10 creators into a group called Fashion, and then you can get a quick overview of the audience you’ll be marketing to: how many of them, which social channels, average engagement, top locations, average age, and gender breakdown. If the numbers aren’t where you’d like them to be—say, you’re not reaching enough females—it’s easy to add and subtract creators until you’ve got exactly the audience you want.

On the campaign management side of things, Brandnew is just as easy and approachable—mostly. The one criticism I’d level here is in the way that brands make initial contact with potential collaborators. You can add entire groups of potential creators to a campaign all at once, and the internal approval process is incredibly seamless and efficient. But, once approved, you have to reach out to each creator one by one to invite them to the campaign. The thinking here is that generic form letters don’t do much to interest a creator, and that’s certainly true. A personal invite with the details attached lets creators know they weren’t picked by some algorithm in a data center, making them more likely to reply. But as brands start to go back and work with their favorites again and again, these friendly intros are unnecessary. Having to individually select each profile listed in your campaign to gauge interest is a scenario, for every campaign you run, is a real time suck. 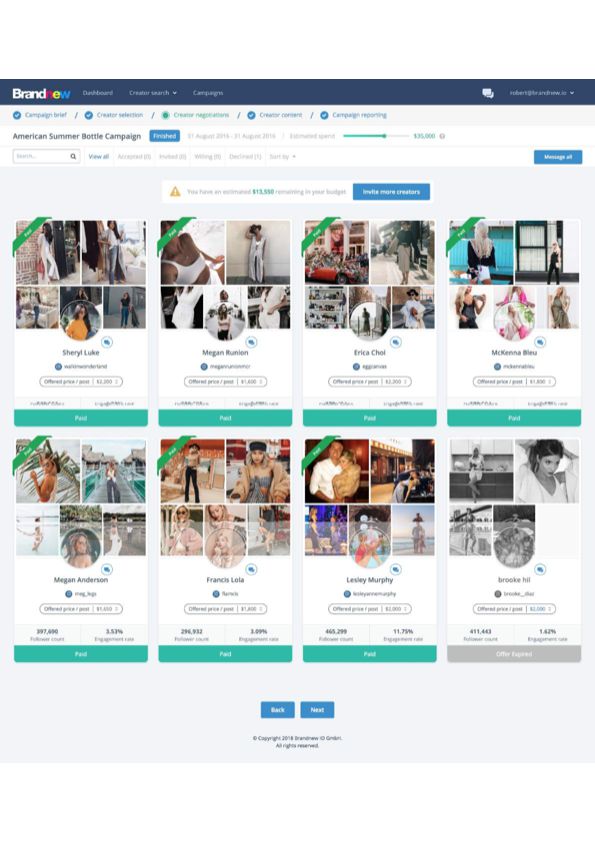 You can choose not to send a personal note; instead you can just make an offer, which fires off an automated message with all the details. But even this quick route has to be done one at a time. I’d love to see Brandnew give users a way to differentiate between those creators who need the quick intro and those who are already in communication/working with the brand. That second group can get a form-invite with no love lost—and, more importantly, no time lost.

Everything that comes after the invitation stage, though, is executed perfectly. Once you’ve sent those initial, individual messages, all communications are centralised into one messaging module, and organised by campaign. This makes more sense than a straight-ahead inbox—although there is one of those for any messages that aren’t tied to any campaign. It’s navigate around, and you’ll never get lost in your conversations. 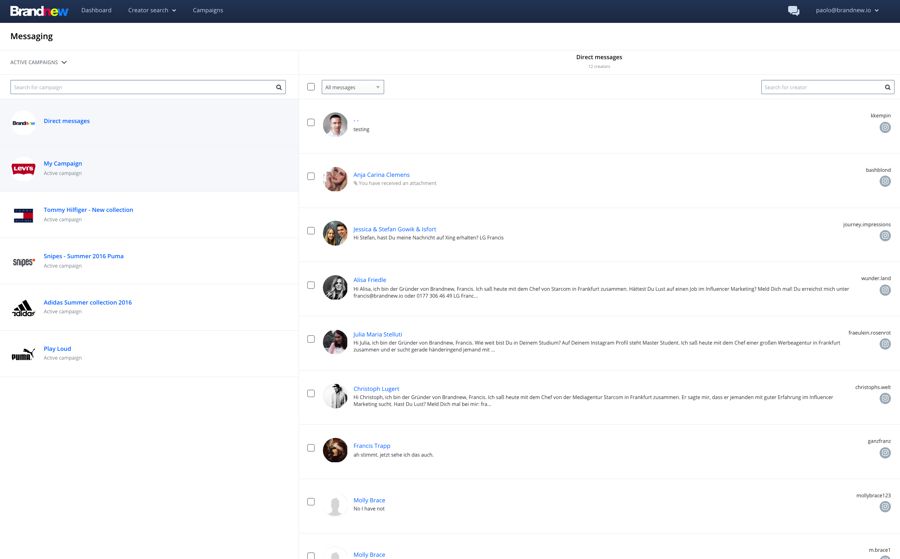 The interface also makes easy work of keeping track of the progress of the campaign—you create a budget, and as you make offers to creators the total available decreases by that amount. Brandnew gives creators 24 hours to respond, after which point the offer is rescinded and that money goes back into the pool of available budget. At every stage of their progress, the creators are funneled into the appropriate category—who’s accepted, who’s been invited, who’s been paid. Payments are handled by Brandnew: customers “deposit” the entirety of their budget up front, and then payments are handled as content is approved. There’s a 2% processing fee for this, which is pretty much what all other platforms should be charging for this service.

As content goes live, the software automatically displays it in the campaign manager console, and updates its engagement statistics in real time. It finds these posts by “listening” for the use of the hashtags specified in the campaign brief. It goes further than that, though, by also including any posts made by the audience using the same hashtag. This is great because you get a close-up view of the people who are most actively engaging, seeing their posts and their own stats, and understanding just how much “free” advertising you got from those. It’s also especially useful if you’re running a contest as part of your campaign, so you have one place to see all the posts people made so they could participate.

At any time during or after the campaign’s run, the reporting module keeps you up to date on all the activity. The data you get here is strictly reactive: how did everything perform? You’ll see total reach, how many posts there were, likes, comments, engagement rate—all the normal stuff. There are also some interesting charts that demonstrate follower or hashtag growth over time, as well as demonstrating how that growth correlated to the timing of each post. It’s interesting that there isn’t any kind of ROI information, as the money spent is tracked in detail. It shouldn’t be that difficult to break down how much each like or comment cost. 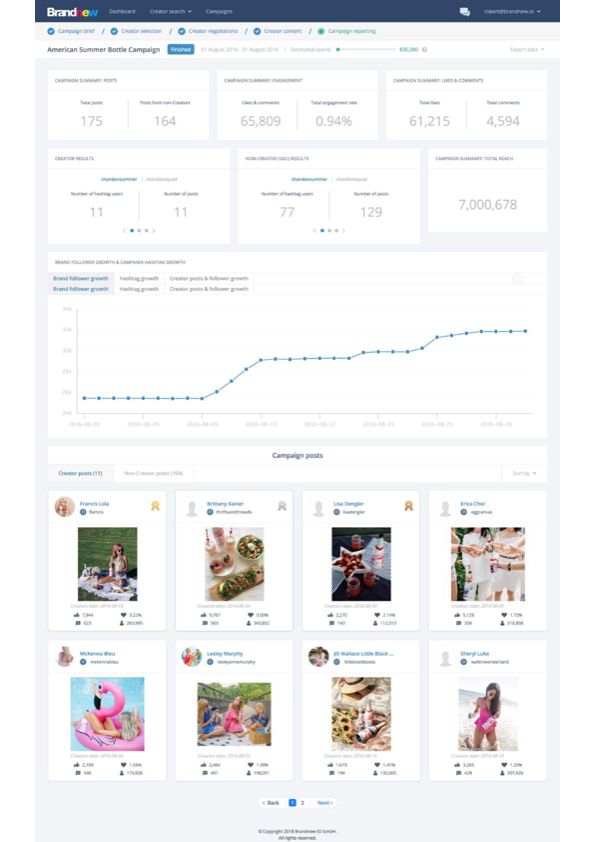 Also absent from the reporting are any demo- or psychographic data about the engaged audience. As mentioned, you get an idea of the overall target audience for each campaign as you’re planning—it would be helpful to know all this about the people who specifically engaged. It’s a great way to know what’s working, as well as shaping future campaigns.

As an end-to-end solution, Brandnew IO delivers on a lot of fronts. It does many things as good or better as its competitors—the way you can work with groups, the messaging function, creator selection/approval, and the reporting feature that displays the ancillary posts are some highlights. The campaign data doesn’t go as deep as it could, but this isn’t so much a flaw as it is a goal to work toward.

The only real drawback is the cumbersome process for inviting creators to your campaign in the first place. Not being able to do that in bulk makes it more difficult to scale, which is especially noticeable when every other part of Brandnew is the model of efficiency. But maybe that’s the real takeaway: that every other part of the platform is well and thoughtfully designed, a great way for brands and agencies to manage their influencer marketing efforts.

Oops, sorry: I meant their creator marketing efforts. Really, that sounds so much better. Let’s all use this brand new term. 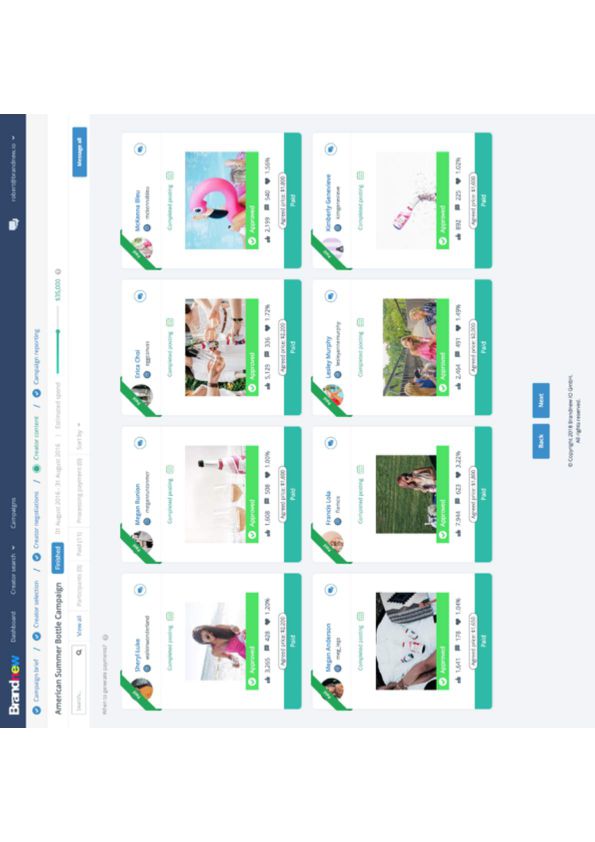 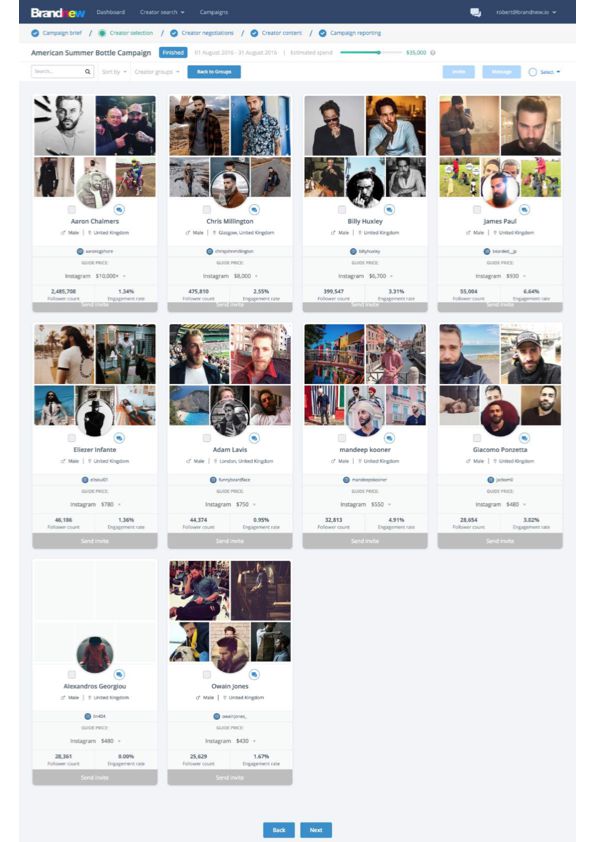 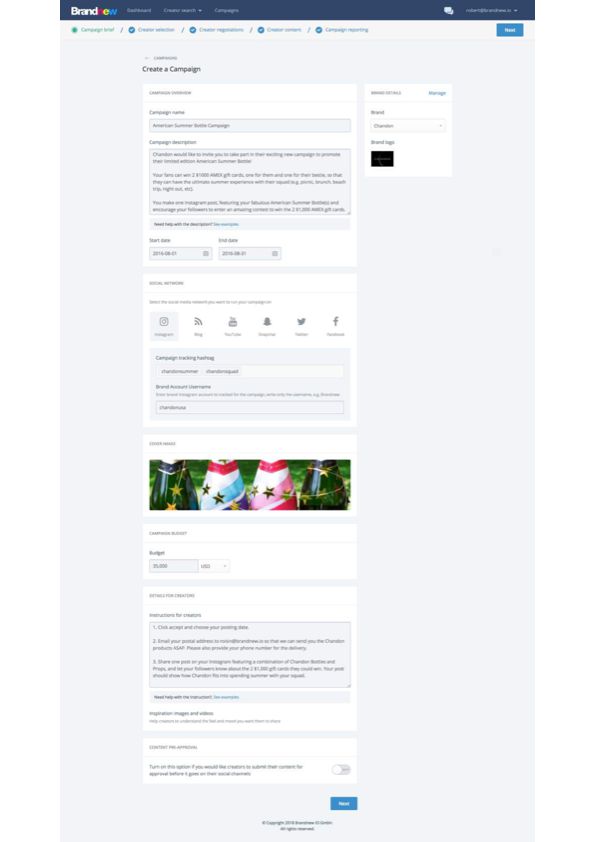 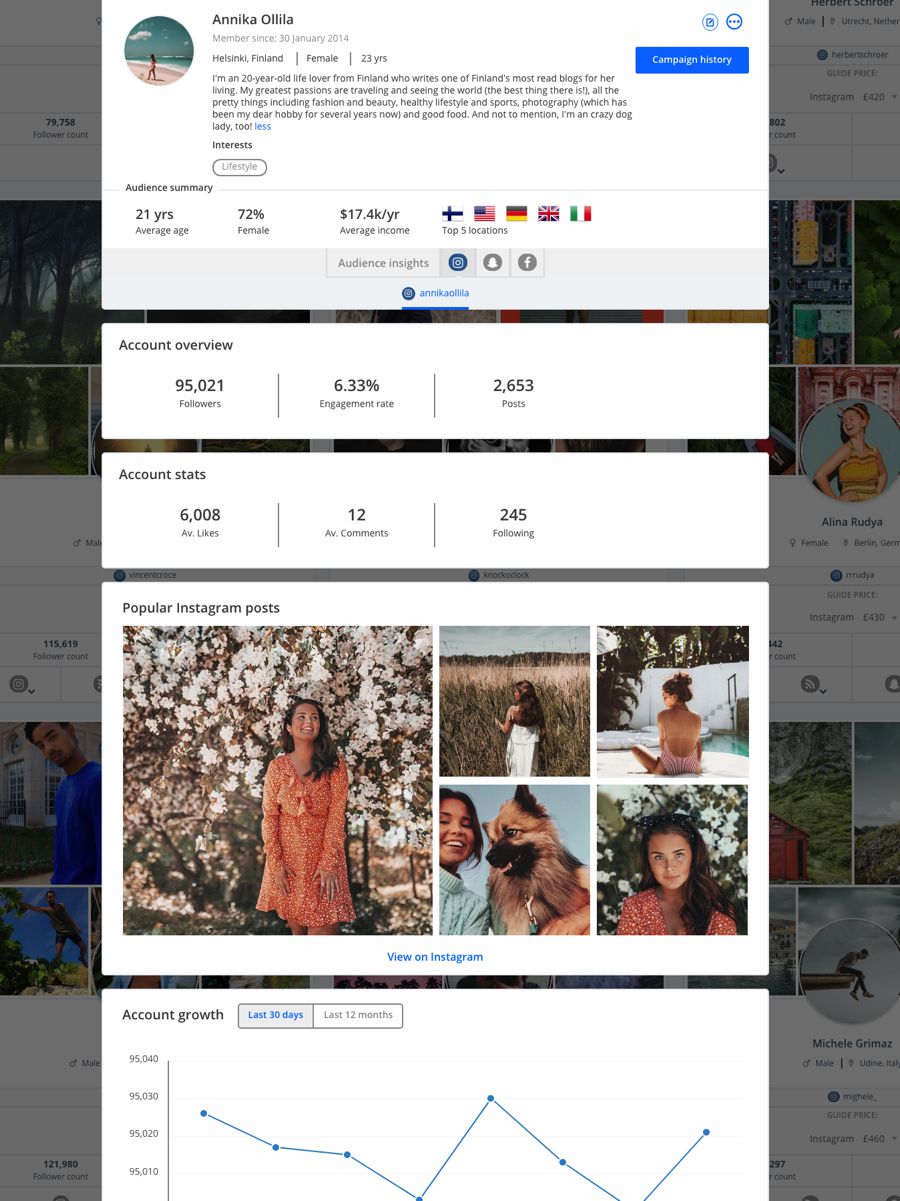