YouTube’s BrandConnect started life in late 2013 as something else entirely. It was called FameBit, created by a company of the same name, and was a self-service software platform. Its  mission? Connecting popular YouTubers with brands for endorsement opportunities. At the time of its launch, influencer marketing had already proven its worth and bigger brands were starting to invest real money in it. It was the time of the Great Marketing Pivot, when everybody was rethinking their digital marketing strategies to go further than basic inbound/content marketing. Platforms and marketplaces were starting to get big, and FameBit's focus on video content was a differentiator. Brands could post their campaigns to the platform, with specifics on what they were looking for, and creators sent proposals. Alternatively, brands could seek out creators with specific criteria in mind and invite them to join a campaign.

They got some press, some early traction, and then a million and a half in funding from 5 different investors. That was in June of 2014, and by August of that year they celebrated the milestone of their 1,000th branded video on YouTube. Those first thousand videos put $250,000 into the pockets of its creators. By March of 2015, FameBit was touting it had reached 300 million subscribers. Here, subscribers are people who signed up as brands or marketers looking for influencers. Their website lists companies like Canon, Sony, and Adidas as brands they work with. It’s an impressive company history.

It was that overall narrative, and Google’s buyout of the company in October 2016 that convinced us to list FameBit in a post about the 8 best influencer platforms back in 2017. It turned out that the company’s history was more impressive than the platform itself. It wasn’t terrible, but it didn’t feel fully formed, either. If there were ever a thought of branching out to different platforms, Google’s purchase of FameBit—and its ownership of YouTube—made it clear that wasn’t going to happen. And it only took a few years for Google to sour on the product itself. They changed the name to BrandConnect, but the platform itself never really went anywhere, despite its addition of some new features.

Ultimately, BrandConnect ceased life as a self-service platform, and now functions as full service offering. Brands can still connect with influencers on YouTube, but to do so involves talking with the team at YouTube—who will then do all the work that FameBit used to let subscribers do themselves. It’s actually an improvement.

As it isn’t actually software anymore, there’s no monthly fee for BrandConnect. Pricing is offered on a per-campaign basis and individualized according to budget.

Note: If you’ve skipped ahead to this section without reading the intro or pricing details, you’ll have missed the part where we reported that BrandConnect no longer functions as a self-service platform. It is still available as a service offering from YouTube, with their team doing all the work for you. The following details of the old platform are offered here as a way to give you an idea of what YouTube’s team can do for you if you choose to use BrandConnect.

At the heart of any influencer marketplace like this should be an extensive database of influencers and plenty of ways to find them. FameBit relies more heavily on influencers finding brands, though. When a brand first logs in, they’re prompted to get started and create a campaign, then sit back and wait for the proposals to roll in. But on a platform with over 56,000 creators to choose from, surely brands will want to survey the landscape a little and see who’s out there. Unfortunately, searching for influencers only shines a light on FameBit’s weaknesses. 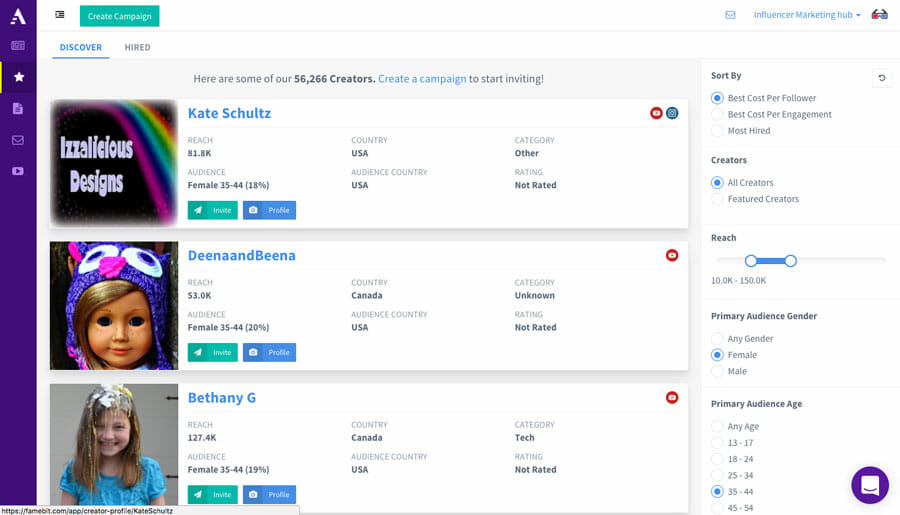 The search function is, in a word, bad. You can filter results by the following criteria: 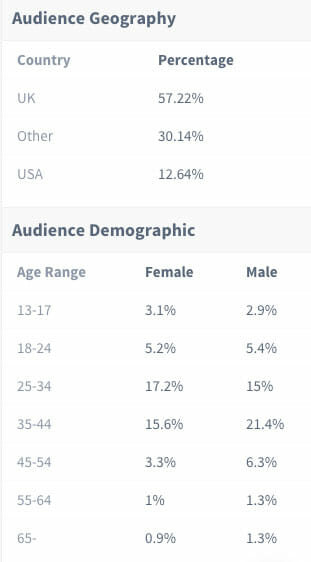 Amazingly, you cannot search by channel. Search results display quick stats for each creator, including Reach (which shows the total of all users across all channels). But if you’re looking for a creator with an especially strong presence on a specific channel, there’s just no way to refine your search to do that. You can only search by total reach, and then drill down into each creator’s profile to understand how the distribution of those followers shakes out.

And if you wanted to find a creator with a big following on Instagram? You won’t. Creators can link up to four different social accounts: Facebook, Tumblr, Twitter, and YouTube. Instagram used to be possible, but not since they implemented tighter restrictions around the API (basically, the “key” developers need to get into and integrate with Instagram). FameBit’s support microsite explains it this way:

Here’s the change to how creators can connect: they can’t. And here’s the change to the way they can work with brands on Instagram opportunities: let brands know in your proposal that you also have an Instagram account with X followers. The thing is, Instagram announced these changes in November, 2015, and they went into effect in June of 2016. Many other influencer marketing platforms, recognising the value of Instagram, took that time to adapt to the changes, or even become Instagram Partners. FameBit has not, nor is it saying it ever will. That’s kind of a big deal.

Then there’s also the matter of the creators themselves. Beyond the minimum follower requirement to get access to the platform, there doesn’t seem to be any vetting or quality control going on. For my first search, looking for micro-influencers in the Health & Beauty category, the first two results introduced me to two young women whose YouTube feeds (embedded into their FameBit profiles) featured videos with titles such as “Anal Q&A,” and “How to Have an Orgasm.” I refined my search to look in other categories, and found the delightful conspiracy theorist account “Exposing Satanic World Government” right at the top. Because the search criteria are so vague, it takes a lot of trial and error to find someone with talent and the look of professionalism to their profile. They do exist on the platform, but probably the best way to find them is to publish a campaign and let them come to you.

Should your patience be rewarded with some viable prospects and you come to terms on an agreement, you can then at least move onto FameBit’s strong suit: its management tools. For the most part, they’ve done a good job with campaign management. Communications between brands and influencers is neatly organised according to what stage of involvement you’re at: Proposals, In Production, Pending Approval, etc. Collaborating on content, reviewing and annotating, as well as requesting revisions, is all there and easy to find from each campaign’s dashboard. Perhaps the best feature is that when you add a creator to a campaign with a specific project, FameBit generates an individualised trackable link. This can be used along with the content to direct viewers over to a product page for a purchase, or a social page for a follow, or any other action/goal you’ve set for the campaign. This makes it easy to see exactly how each influencer’s content performed.

Well, not exactly. The performance metrics are a little light, especially around understanding the audience demographics that most positively responded to your campaign. You can see the total engagement and clicks for the whole campaign, or the same stats for each influencer. Based on what you spent, the platform does the easy math for you, too, showing you “cost per engagement” and “click-through rate.” If your trackable links took viewers to a purchase page, you can easily gauge the ROI on your campaign, too. These stats are helpful in telling you how your campaign performed, but there are no metrics to help you understand what’s working so you can apply that knowledge to future campaigns.

But even the management tools are lacking in some areas, contributing to that overall feeling of software that hasn’t been finished. There’s no way to maintain lists of influencers you might be interested in working with. From a creator’s profile, or from the search results, you have the option of sending them an invite, which has the effect of saving them for later. But it also sends a message to the creator telling them you want to work with them on a campaign—you simply can’t maintain a list for later review. There also aren’t any mechanisms for enforcing FTC compliance, something that’s a matter of legality for US brands/campaigns. There are very specific rules governing how sponsored posts must disclose their paid-for nature, and brands and influencers that run afoul of these rules can face penalties. There’s a lengthy article in the FameBit knowledge base advising brands on this, but the solution they provide is to advise everyone to talk amongst themselves and figure out how they’ll stay legal.

“Honestly, I don’t see FameBit sticking around for the long-term.”

These are the words that began the conclusion of this review when it was first published in 2017. And we were right! Sort of. FameBit is gone, and not just by virtue of its acquisition by Google.

“Unless they radically reinvent themselves, or flesh out the platform so that it’s at least competitive with similar services on the market, there’s nowhere for FameBit to go but home.”

We nailed it again! Google/YouTube has radically reinvented the platform and turned it into Not-A-Platform. It’s a service offering now, with YouTube’s team putting brands in contact with the more popular and relevant YouTubers around, and finding effective advertising opportunities wherever they may be. They’ve also added a few features to make purchasing easier directly from YouTube. All told this sounds like an improvement, which is the one thing we didn’t predict would happen after five years. It’s absolutely worth trying out, if the price is right, as YouTube is still the #1 social video platform.