Since its launch, Fanbytes has shown it is the leading platform for marketers to reach Gen Z, an often overlooked demographic of 13 - 21 year olds that the Old Guard of Marketing just doesn’t understand. They know that you can’t reach that group over Facebook. They know if you want to reach them on Instagram you’re going to have use the Stories feature. You might recall that Instagram Stories is a note-for-note copy of Snapchat, the social media channel that’s overwhelmingly used by Gen Z. And with the recent surge of TikTok, Fanbytes was to quick to see yet another way to the hearts and minds of that not-yet-adulting demographic.

When we first looked at Fanbytes in early 2018, the platform was very much a Snap-focused solution. Timothy Armoo, founder and CEO of Fanbytes—and a Gen Z baby himself—appeared to have a better handle on the channel’s value proposition than Snap itself did. Streaks and puppy ear filters are nice features, but as Armoo wrote in a post on campaignlive.co.uk, the app isn’t merely another social media channel—“It’s glaringly obvious that Snap are the new TV,” he says. Armoo makes a compelling case that the app is the primary source of “broadcast” entertainment and news for millennials, precisely because it presents those things to them in a format that feels more comfortable.

It’s a similar story with the workings of Tik Tok, which doubles down on being a broadcast media alternative by making every user a creator of that media—and offering a chance for them to collaborate with each other, as well. Community and entertainment are all wrapped into one, and once again Armoo & company demonstrate their gut-level understanding what makes Gen Z tick (and tock, for that matter). With its Tik Tok offering, Fanbytes further refined its self-described “advertainment” approach to marketing. Brands can work with influential Tik Tok users to create themed video challenges, which doesn’t just get audiences engaging with a like or a comment: they start creating their own videos, too, as a response to the challenge. The net result is that commissioning a single video from a Tik Tok star can end up spawning hundreds, or even thousands, of other videos in response—all of which serve a brand’s marketing goals in ingeniously efficient ways.

Thus far, Snapchat and Tik Tok haven’t been primary destinations for influencer marketing. It’s being done, of course, but not as methodically (or, as software assisted-ly) as it’s done on any of the big three social channels. Mostly, though, advertisers just haven’t figured out how to reach the audiences on these channels, and both self- and full-service marketing services haven’t offered much in the way of guidance for achieving success with them. Fanbytes aims to change all that, with a turnkey platform that’s been successfully used by such companies as Universal, Sony Music Group, Paramount, and McDonald’s. Oh, and some little company called Apple used them to promote their music service.

As Gen Z ages into greater financial independence, it would be a mistake to think that they’ll mature out of the social channels they used as kids. Meanwhile, the younger end of their generation are starting to get their own phones and are adopting Snapchat and Tik Tok as their channels of choice. It’s a demographic that marketers are keen to target, and Fanbytes is the one service that’s helping them do that.

Fanbytes
It’s right there in the Fanbytes mission: they’re helping brands “win the hearts of Gen Z.” They do this by being the only platform focused on influencers from Snapchat and TikTok, and if history is any guide: they do it well.
Pros and Cons
Focus on Snapchat and TikTok by people who know Snapchat and TikTok
Templates for Snaps, Instagram Stories, lenses for both, and TikToks
No software subscription, you’re charged a percentage of your campaign budget
Not much data, on the influencers or on the campaigns
Minimal search criteria for influencers
Best for: Brands targeting young demographics (13-21)
Ratings
Features
4.2
Ease of Use
5.0
Reporting
3.8
Overall Score
4.3

Fanbytes isn’t a SaaS platform that you access through a monthly subscription. Instead, brands work with the company on a campaign by campaign basis, spending whatever their budget will allow for each one. Minimum spend is £3000.

What’s refreshing about Fanbytes’s pricing model is there’s no wasted spending: they charge on a cost-per-completed view model. If a user abandons an ad halfway through, there’s no charge. Better news than this is the company’s track record with campaigns, which roughly average a 90% completion rate. What if you get more views than you budgeted for? Not to worry: you only get charged up to your maximum, and anything beyond that is a bonus.

For the Fanbytes platform, the details are as much about the company’s approach as it is about the mechanics of launching a campaign. Their website is clear on the company’s mission: “We help brands win the hearts of Gen Z and Millennials on social media.” It’s not exactly a catchy slogan, but it gets right to the heart of the matter. The average age of a Fanbytes employee is 22, and they do not shy away from their youth. Snapchat and TikTok's users are overwhelmingly Gen Z, and that’s an audience brands can’t reach as reliably anywhere else. So who better to help craft campaigns than a group of whip-smart kids that speak the language? 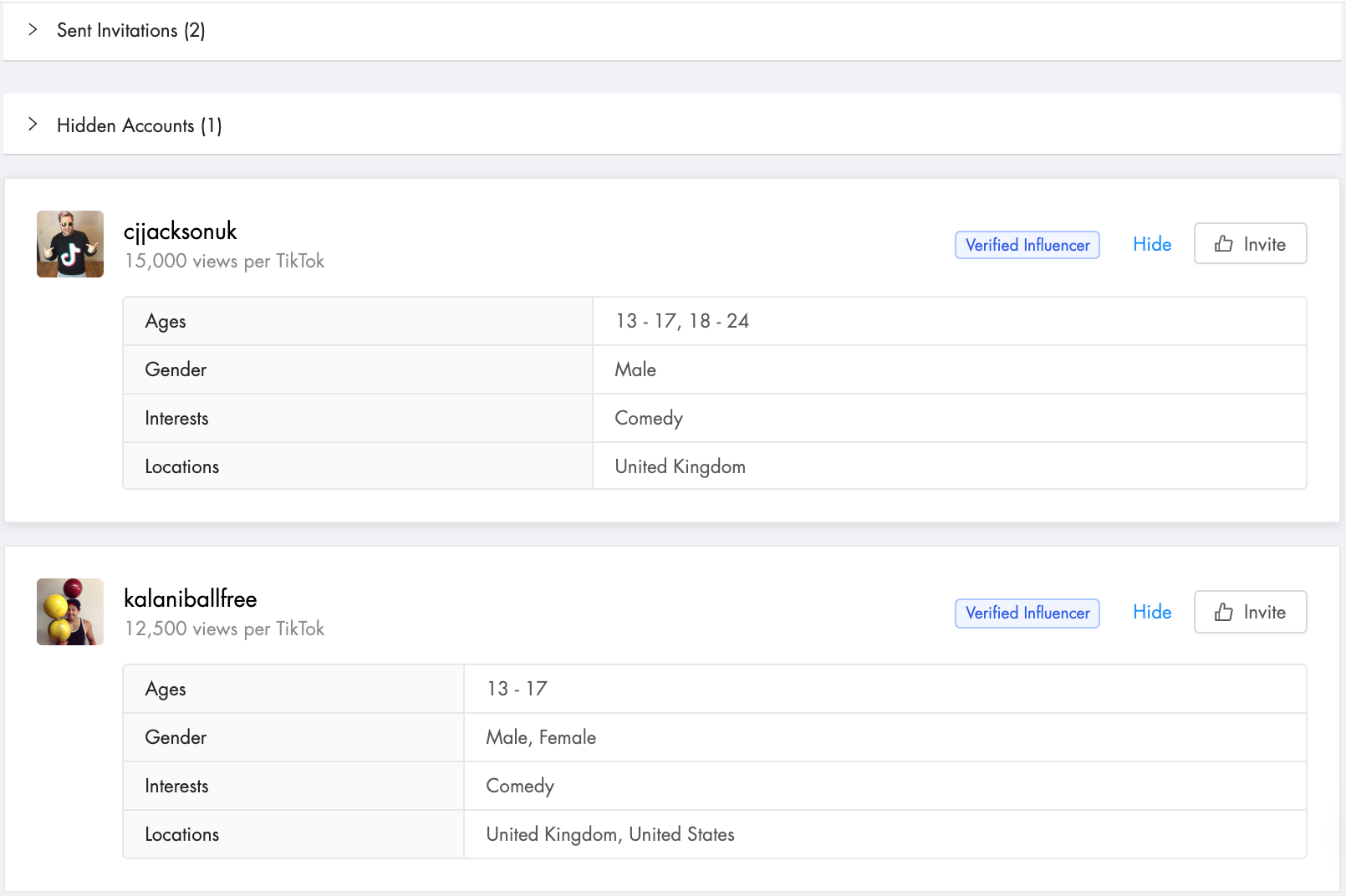 As a platform, Fanbytes seems—on the surface—to be a pretty basic piece of software. But really, the special sauce that makes it so effective isn’t in the technology itself. It’s their native understanding of how the 13-21 year-old demographic engage with social media—what grabs their attention, and the ways in which they want to engage. To that end, they’ve created not just a way to connect with influencers, but actual ad templates that takes the guesswork out of how to get the most out of those influencers. In this way, Fanbytes is as much a marketing agency as it is a platform. There are four types of ad templates brands can use.

In all cases, these ad templates exploit the Gen Z tendency toward participation and sharing, creating heavy engagement with branded content in ways that feel less like an ad, and more like entertainment.

To get started, you navigate over to your Campaigns Dashboard and create a new one. Here you can specify your budget and the target demographic with some basic info (location, gender, and age). You’ll pick from one of the templates, and the Fanbytes algorithm goes to work finding influencers whose audiences meet your criteria and who are best suited for the type of format you’re looking to run. Next they can create tracking links to monitor conversions and follow through. Once the campaign brief is submitted, brands can go on to look at the influencers in more detail, including any previous branded content to get an idea of the kinds of things they’ve done in the past. 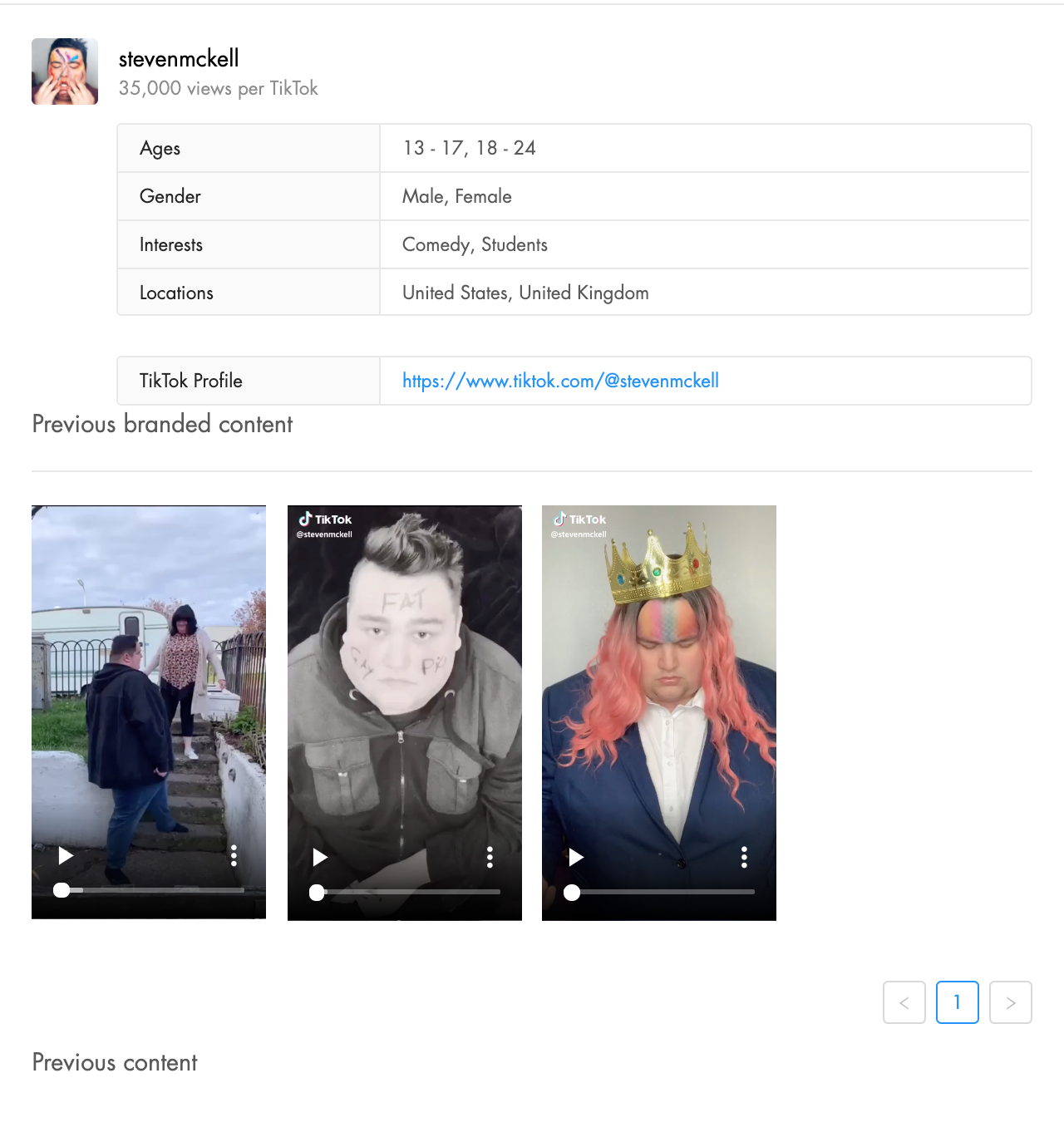 These profiles are pretty minimal, with only basic data about follower demographics and performance metrics. This is definitely one area where Fanbytes could improve: without knowing too much about the type of people who are engaging, each campaign exists in a vacuum. There’s nothing presented here to help you learn more about the engaged audience, meaning there’s no good intel to help shape future campaigns. That same deficiency of audience data is evident for the post-campaign reporting, as well. 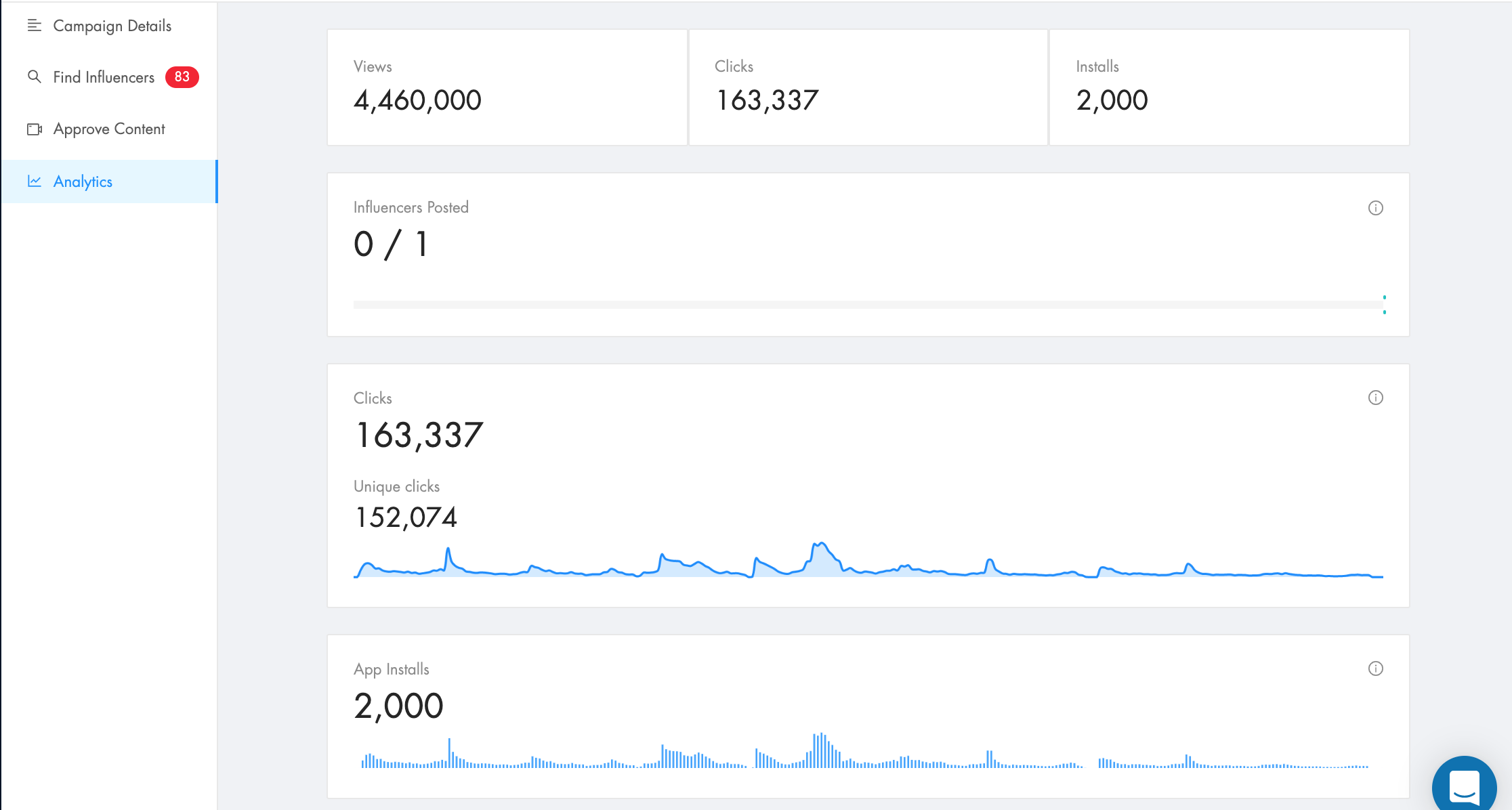 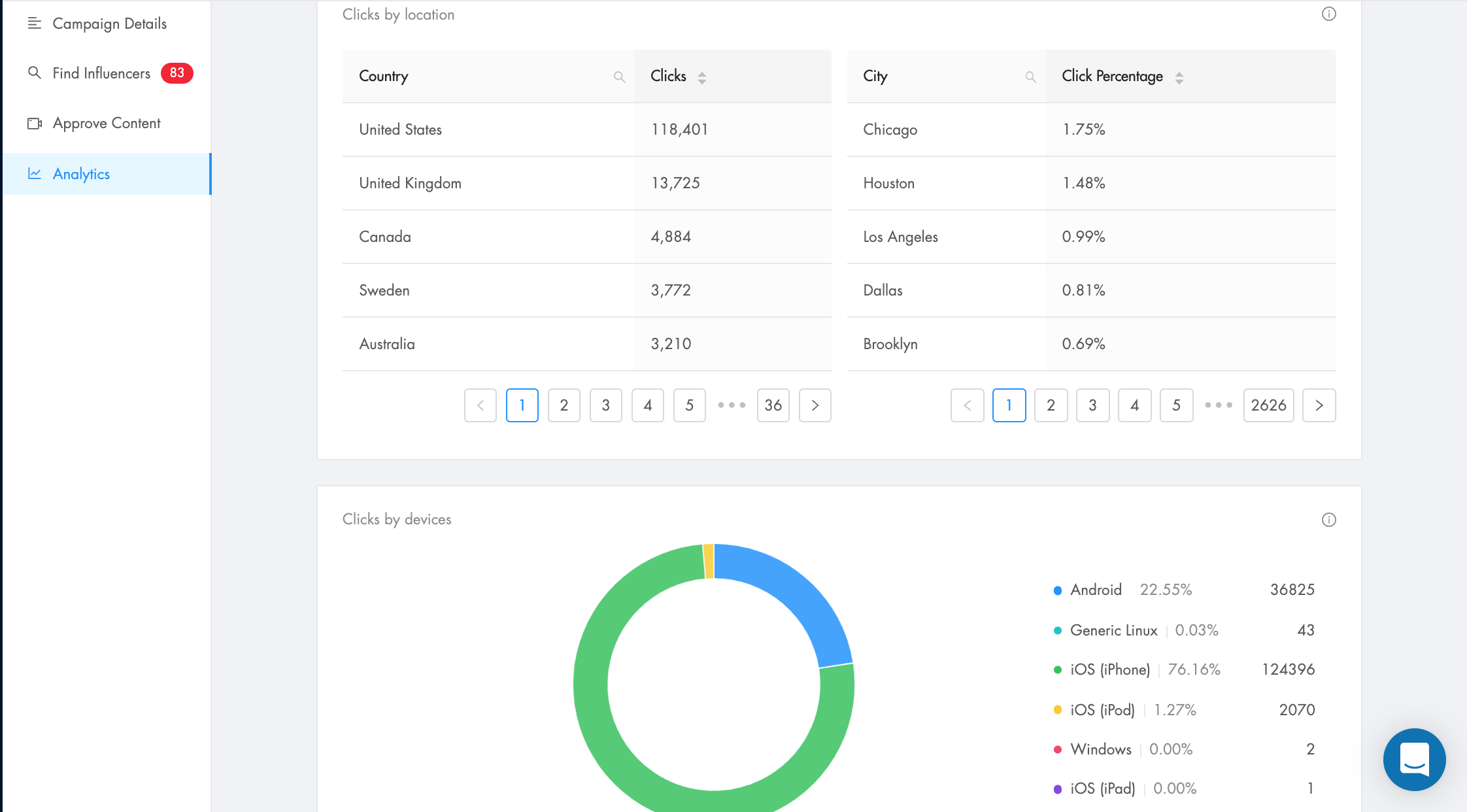 You can see from the screenshots above that the measurement deployed here is more about justifying the initial spend of the campaign. This isn’t a bad thing to know; it’s obviously a crucial part of reporting. And while there’s no doubt that Fanbytes’s influencer ads are successful, it’s not quite the holistic approach to marketing that the best influencer campaigns can be.

That said, it’s still the best kind of approach to influencer marketing for these channels, and for engaging the Gen Z audience in general. That’s a point that should not be overlooked.

In many respects Fanbytes is doing things that no other influencer platform is even trying. It’s an exceedingly clever platform, developed and run by a team that doesn’t just understand their target demographic: they are the target demographic. Their unique understanding of both Gen Z and the ways in which they engage with social media gives them a credibility that shouldn’t be ignored.

This is comfortable territory for them. You wouldn’t ask someone from Spain to be your guide in Germany for the same reason you shouldn’t hire someone in their 30’s to tell you how to advertise on Snapchat: they don’t speak the language. From that perspective, Fanbytes becomes a necessity. You aren’t going to reach these audiences anywhere else.

Fanbytes is an influencer marketing platform. It connects with Snapchat, Instagram Stories, and TikTok. With their services, you can effectively market to Generation Z and millennials on social media. All things considered, Fanbytes is as much a marketing agency as it is a platform.

Who will benefit from using Fanbytes?

If you want to reach Generation Z, a demographic of 13 – 21-year-olds that is in many instances forgotten about, Fanbytes is the leading platform to use. Fanbytes understands that you won’t be able to reach this demographic via Facebook. Instead, the Instagram Stories feature will be much more effective - something that Fanbytes has realized. Fanbytes also integrates with TikTok which is another way to reach this specific demographic.

How does the pricing of Fanbytes work?

Fanbytes doesn’t work like other SaaS platforms that you need to pay a monthly subscription to in order to be able to use their features. Instead, a brand works with Fanbytes on a campaign-by-campaign basis which helps to eliminate wasted spending. Brands can spend whatever they will allow for each campaign, as long as they spend at least £3000. You also do not have to worry that you’ll have to pay more than your budget if you get more views. More views is a bonus!

What are the advantages of using Fanbytes?

The software itself is quite basic. Though, what sets them apart from other platforms is their native understanding of how Generation Z engages with social media. Fanbytes knows the manner in which they prefer to engage and how to grab this demographic’s attention. They have created actual ad templates that help to get the most out of influencers. These ad templates take advantage of Generation Z’s preference to participate and share to create heavy engagement with branded content.

What are the cons of Fanbytes?

The influencer profiles are rather minimal. It has only basic data about performance metrics and follower demographics. As you do not know too much about the kind of people who are engaging, your campaign is isolated from the normal context in which it can be best understood and evaluated. As you can’t really find out more about the engaged audience, you also do not have good information to help create future campaigns. The post-campaign reporting also does not have enough audience data.