It’s a vastly different approach than most platforms take, especially Marketplaces—which, on the surface, is the closest general description of what influence.co does. Most (OK, all) marketplaces that we’ve seen are a variation on the same process: create a campaign brief, broadcast it to whatever influencers are on the platform, wait for them to apply, run a campaign with your chosen few. And, sure, you can do that with influence.co, but it also functions as its own kind of social media platform. We’ll get into how this works in practice in The Details, but for now it’s enough to say that the concept behind influence.co means brands are better able to foster and sustain the sorts of authentic and long-term relationships that are at the heart of influencer marketing. And that’s something that no other marketplace can do (or has even attempted).

Influence.co has been around since 2016, and its three founders—Niel Robertson, Jeff Smith, and Ryan Angilly—built out their company with a long term vision. They’ve seemingly operated in the shadows of the industry, making very few waves or splashes. Their Crunchbase profile is an information wasteland: there are barely any useful details about the company, nor is there much of anything in the way of press coverage or news. With its emphasis on collaboration through community, the founders needed to spend time actually building that out. By design, influence.co becomes more useful, and has more value, as the platform grows larger. It makes sense then they weren’t advertising themselves too heavily in the early years.

That also makes how much they’ve been able to grow the community doubly impressive. With almost no publicity or marketing, influence.co is now a social network and marketplace with over 250,000 members. Roughly 150,000 of those are the influencers themselves: that’s where the team focused most of their recruiting energy, the classic “If you build it, they will come” philosophy. Influencers are still the platform’s number one priority in terms of acquiring new users. Those influencers share the service with 70,000 businesses, including some very well known brands like Amazon, Jack Daniels, Bumble, and Dyson. The remaining 30,000 accounts are for personal use: people who are neither influencers nor brands. This could be a person who wants to become an influencer but hasn’t got the numbers yet, or it could be someone like—oh, I don’t know, maybe a writer of influencer marketing based content and software reviews who wants to keep his eye on what’s going on in the industry. In this way, influence.co has created something that’s truly unique for the IM software landscape.

Influence.co
Influencer.co takes the idea of an influencer marketplace, and tweaks it ever so slightly to add a social media component. In this way, influencer.co becomes more than a marketplace—it’s a meeting place where influencers and brands can develop actual organic, authentic connections.
Pros and Cons
Social component gives brands a more personalized insight into influencers
Community-focused platform drives/supports authenticity
Many rave reviews from users
Campaign reporting is extremely basic
Influencers author their own profiles rather than relying on data
Best for: Small and Medium Brands
Ratings
Features
4.5
Ease of Use
5.0
Reporting
4.0
Overall Score
4.5

Influence.co works off a freemium model, and it does this in an easy and transparent way. There are only two plans: one that’s free and one that isn’t.

Influencers also have a couple of options for their accounts:

For both influencers and brands, paying for the Pro plan puts a “PRO” badge on their profile (or should we say PRO-file? [hashtag dad jokes]).

If you’re at all familiar with influencer marketing software, you might be wondering how a marketplace platform could double as a social channel. There’s an inherent community to social networks, while marketplaces have a more mercenary quality to them. Brands and influencers alike are only there for themselves, and trying to negotiate their best prices. Where does the community fit in?

This is why the creators of influence.co refer to it as the LinkedIn for influencer marketing. There is, of course, the job seeking element to it:  with over 600 live campaigns, brands are trying to find creators to collaborate with, creators are trying to find brands that want to work with them. Meanwhile, the social feed is populated with all kinds of content: influencers can post as a way to show their worth; brands share content or open campaigns; brands can ask for input from influencers, maybe advice on what works and what doesn’t. There’s also content created and published by the online influencer culture magazine nofilter. It’s run by influence.co, but don’t think that it’s just a cynical attempt at adding value. They’re taking nofilter seriously, putting out some legit content and recently hiring former Rolling Stone and Billboard editor Nick Catucci. 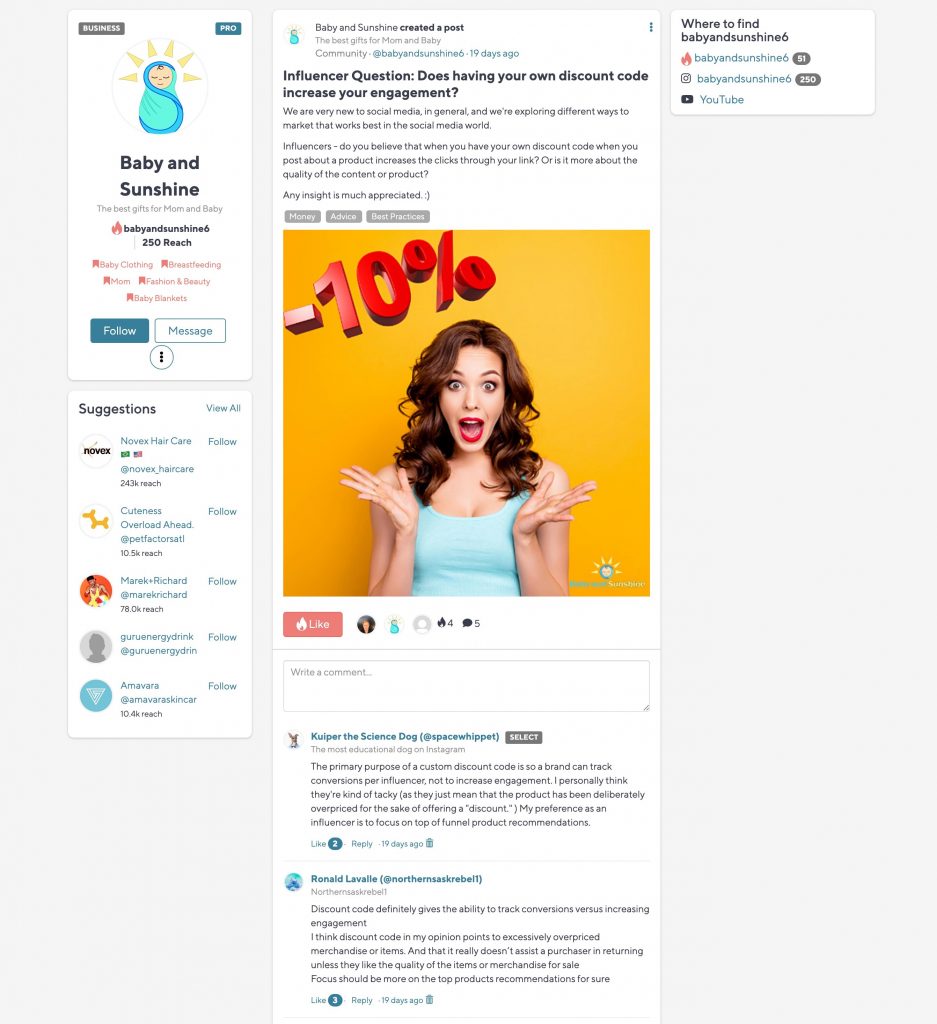 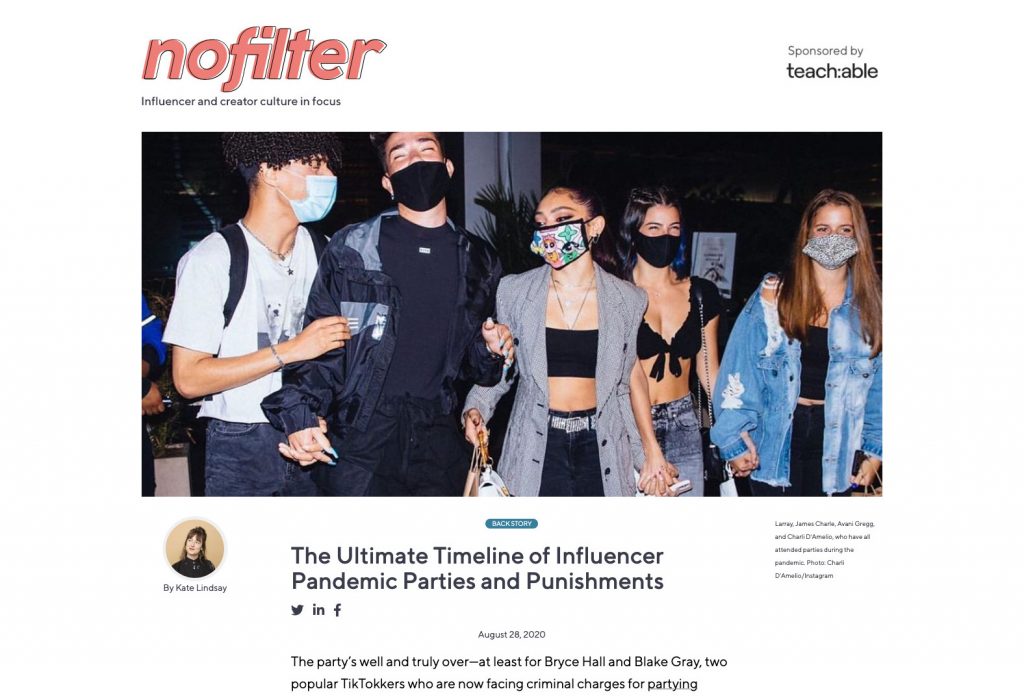 Because of the social media functions, influencers are able to create much more thorough profiles for themselves and really showcase their work. With most marketplaces, an influencer profile is automatically populated with data and content that’s ingested through the API. Here, the influencer has a greater degree of control over the profile, able to write their own bio and create a portfolio of their past collaborations across any of their connected profiles. Standard demographic information is shown by default, and brands/agencies with Pro accounts can look at the more advanced demographics that are part of the first-party data influence.co receives via API. 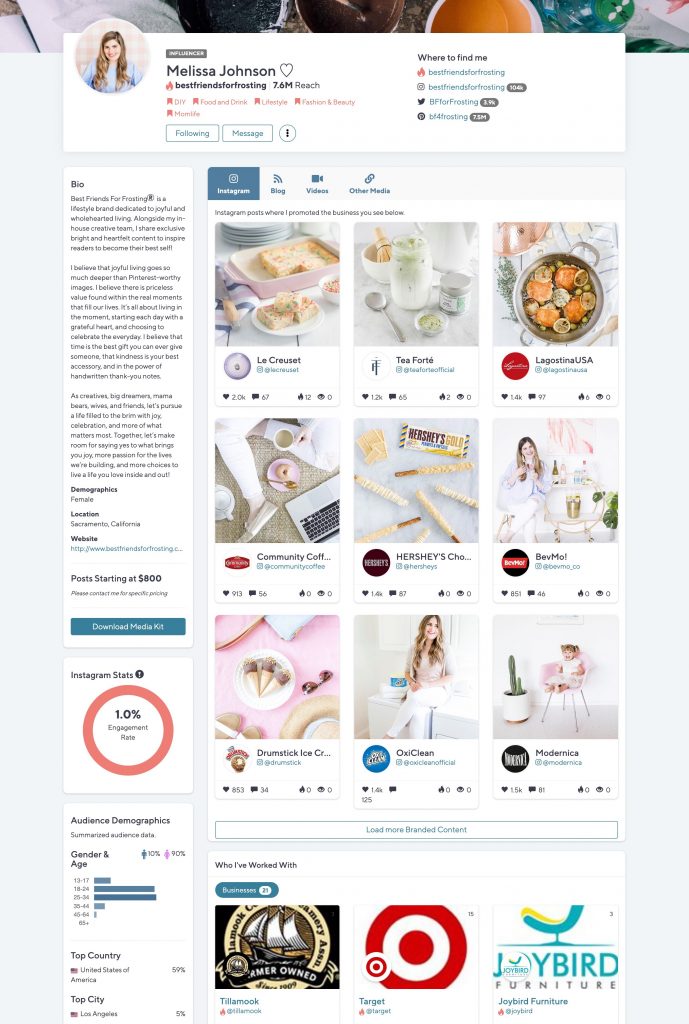 It’s important to understand the primary function of the social aspect of influence.co: it doesn’t take the place of discovery and activation, it complements it. As with any influencer, engagement and authenticity matters. When they’re liking and commenting on posts, brands see influencers as motivated, willing to put in the effort. And while brands can absolutely post their open campaigns to their profiles (and therefore the feed), there are also more traditional methods of doing so. They can use the search function to find influencers by standard criteria like category, followers counts, and social channel. But they can also search for more unconventional things like past collaborations (maybe with a brand’s competitor), or whether or not they have an Amazon influencer shop. 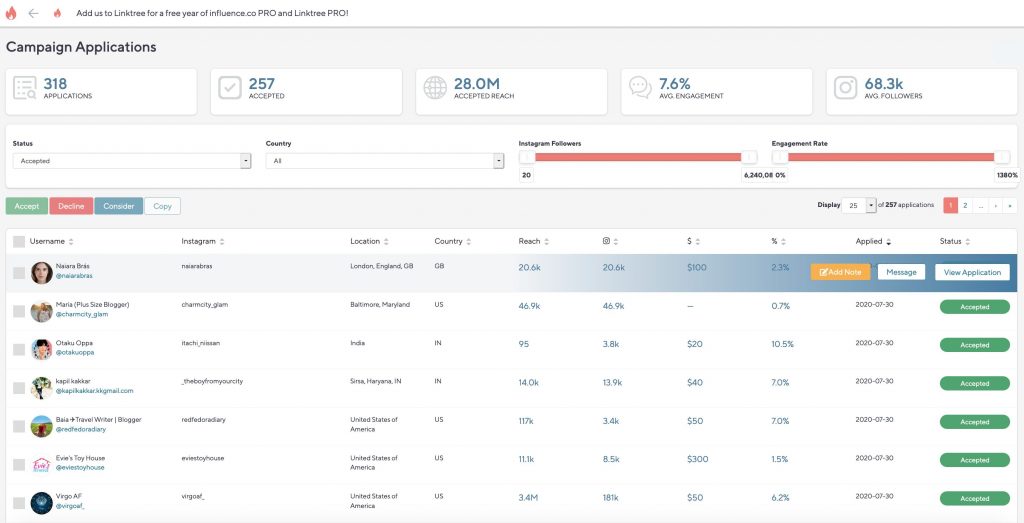 Creating campaign briefs on influence.co will also be a familiar experience for anyone who’s worked with a marketplace before. You can create detailed campaign briefs spelling out your objectives and requirements, accept applications, and message back and forth with influencers who do apply. If you’re on the free plan, this is where your features end. You can still run campaigns outside the platform, using whatever software (or none at all) to manage them as posts go live. For those paying for the Business Pro plan, you’ll get access to the campaign management tools for handling all the applications, communicating with team members, and finalising content for everything to go live. 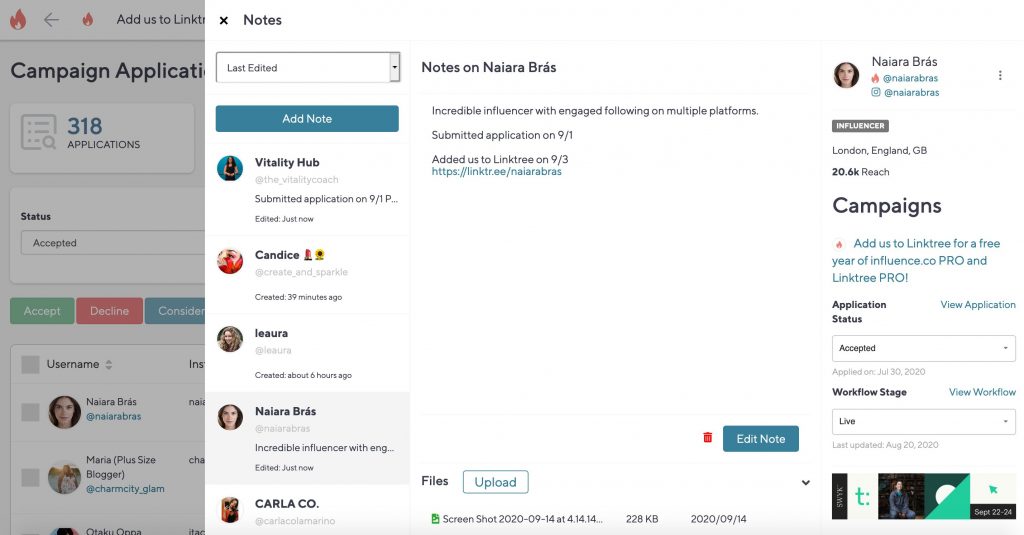 Finally, there’s the reporting on your campaigns (for Pro accounts). This is actually the one downer in a series of bright spots. The information you get out of influence.co is minimal, consisting only of publicly available data: total likes, total comments, and a catalog of all the content that’s part of the campaign. You can sort the content by newest/oldest, or most/least popular. And that’s essentially it. No visualisations of the data that it does have, no analysis of when and where and who is engaging. It’s surprisingly lean for a platform that excels at everything else. 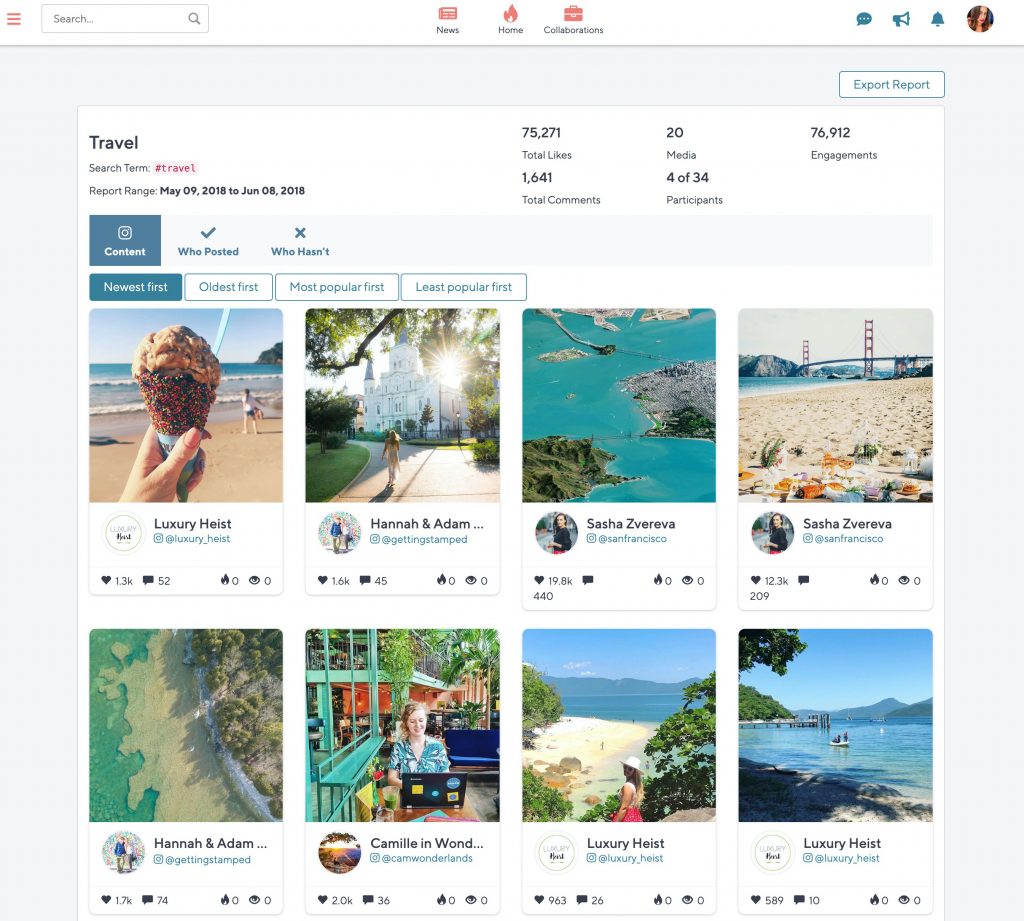 We’ve covered a lot of different influencer marketplaces as part of our platform reviews here, and until now they have all been different implementations of the same process, some doing it better than others. If you go back and read the other reviews, you can play a drinking game with the number of times there’s some variation of the phrase “as you’d expect”—as in “Search works just as you’d expect,” etc. Much of influence.co’s more traditional marketplace function works as you’d expect, as well.

What is unexpected is the social foundation that props everything else up. This succeeds in elevating the platform to something else entirely. Brands can search for influencers easy enough, but it’s more likely the ones they find organically, the ones who are interacting with posts up and down the feed, will end up in the kind of long term brand/creator relationship that is what makes influencer marketing so effective. If you want to market to your audience authentically, driving users to become your customers and organically spreading the word, then finding those influencers in the same way seems the logical choice. It’s social media marketing for social media marketers looking to improve their social marketing.

The transactional nature of the influencer marketplace is turned upside down with influence.co with the creation of a communal and collaborative social space focused on a specific audience. Anyone can participate in the social aspect of it for free, so even if you’re using other software this is an excellent way to discover new talent, and can complement your existing methods without complicating or compromising them. If it weren’t for the minimal data in the campaign reporting, this would be 5 star software. The more people sign on to the community, the more effective influence.co becomes. And as more brands and agencies see that effectiveness, they’ll want to migrate fully over and make the platform their go-to professional network and campaign management tool. 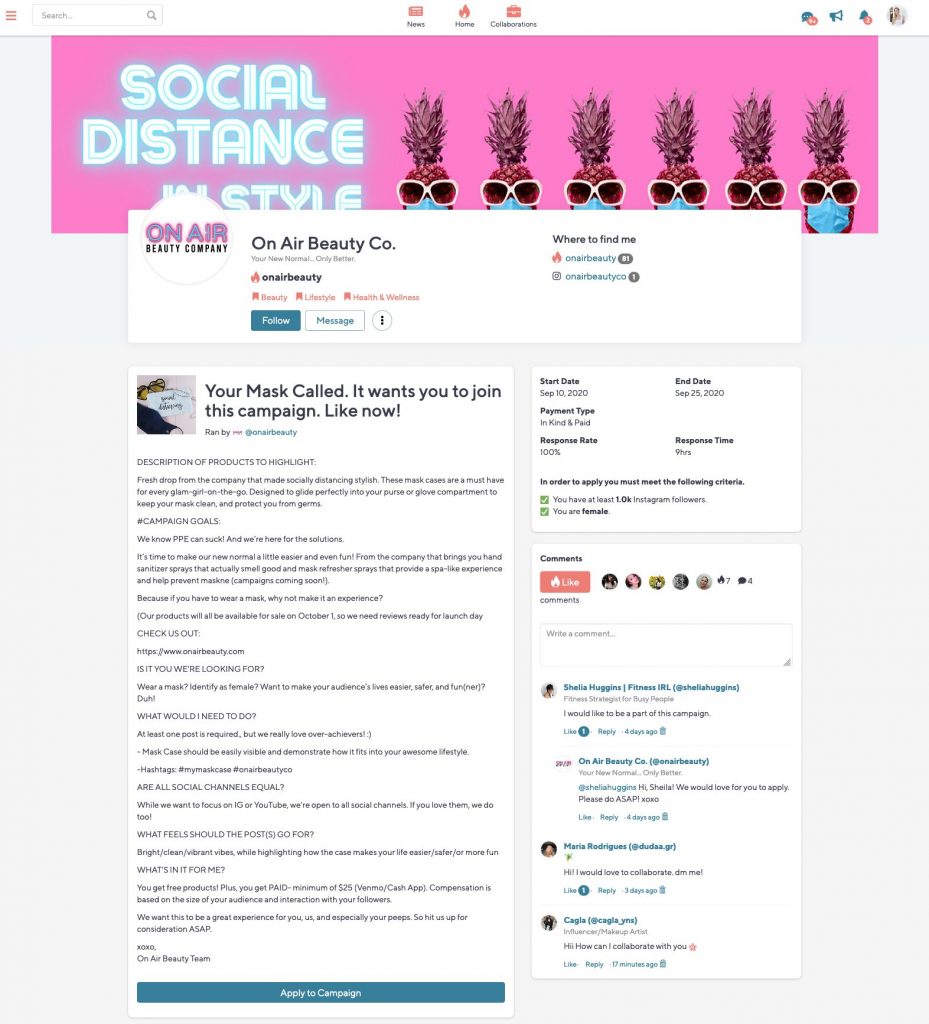 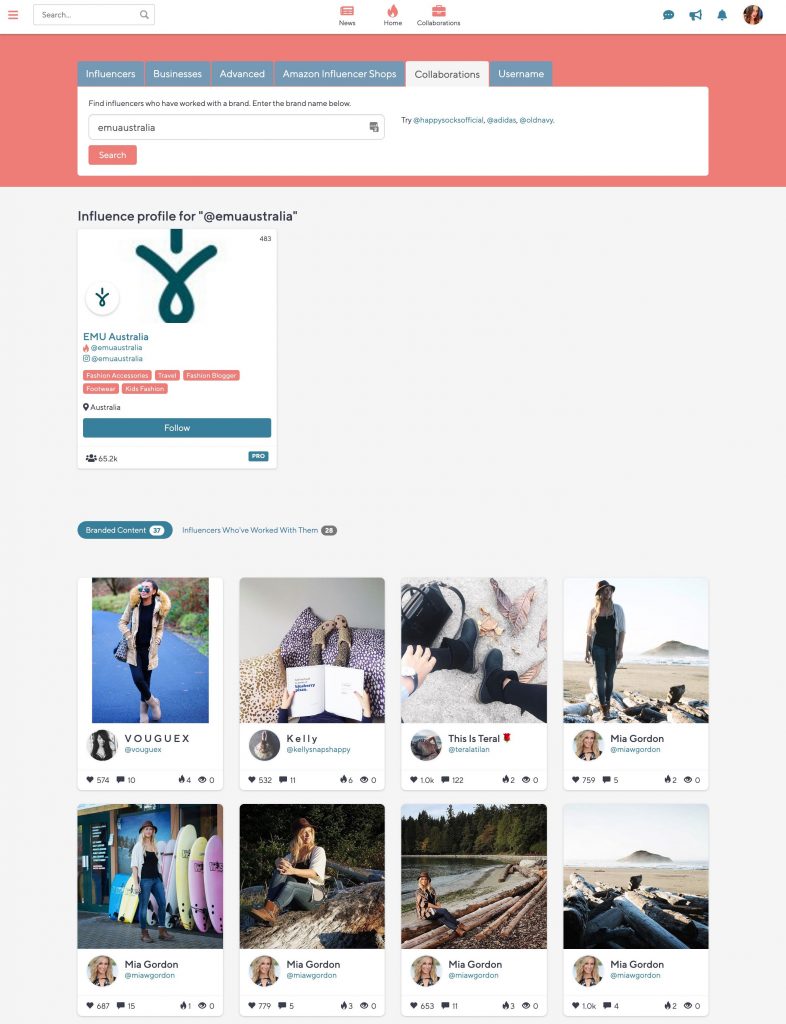 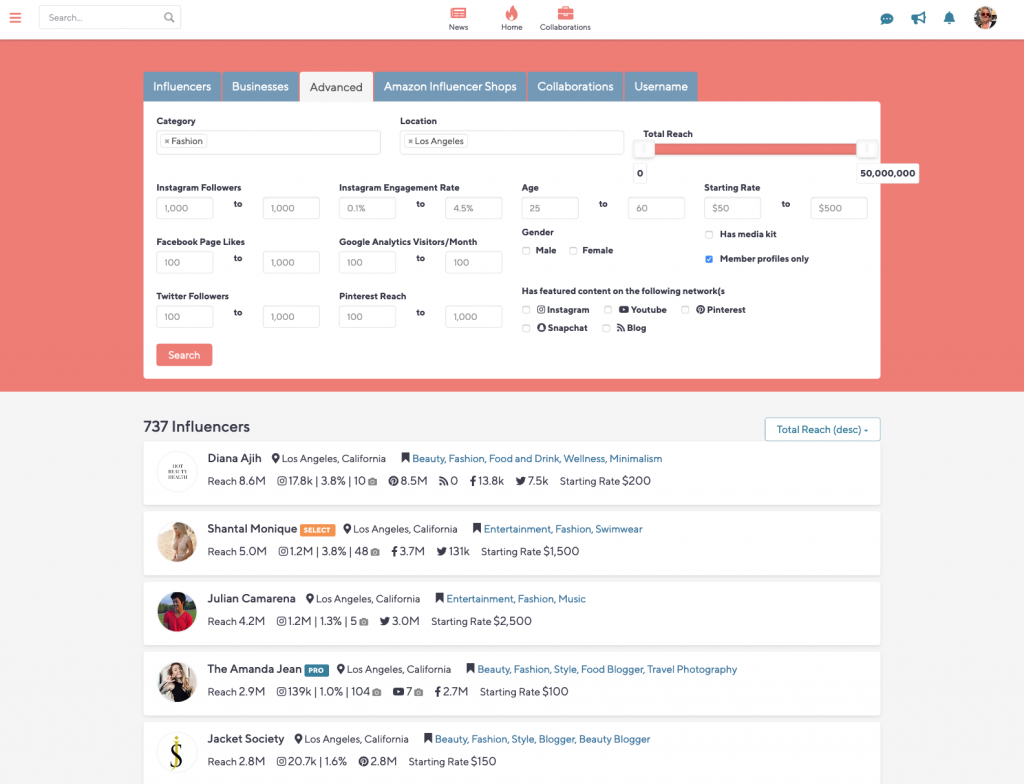 Can businesses use influence.co for free?

Influence.co uses a freemium model for businesses that is transparent and easy to understand. With their free Business Basics pricing plan, you can create your own profile and access the platform’s community. You can complete basic searches with as many as 50 results per search and then organize these results into three lists. If you would like to work with an influencer, you can message a maximum of 12 influencers per month.

Can influencers use influence.co for free?

Influence.co offers a free plan for influencers. Their basic plan, which costs $0 per month, lets influencers create a complete profile on the site. They can contact five other members per week and apply to five brand campaigns per week. When using the search feature, the results will be limited to 50 results per search. They can also get access to the demographics of their Instagram followers. For unlimited results and more member contacts, influencers will have to opt for the paid Pro plan.

Is Influence.co a good platform for influencers?

Thanks to the platform’s social media functions, influencers will be able to create more detailed profiles that really present their work. The majority of other marketplaces automatically populate influencer profiles with content and data that are ingested via API. Though, with influence.co, influencers have more control. For example, they can write their own bio and create a portfolio of their past collaborations across any of their connected profiles. The pricing is also very affordable, if you do not want to use the Free plan.

What are the disadvantages of influence.co?

The main disadvantage of influence.co is the reporting on your campaigns feature that is included in the Pro plan. The information that influence.co provides is really limited. It only has data that are available publicly, such as total likes and total comments. You can also only organize the content according to date and popularity. It does not offer visualization of the data and it also does not analyze who engaged or when and where they engaged.

How does the pricing of influence.co work?

There are only two plans. If you do not want to use the free plan, you have to sign up for the Business Pro plan that costs $600 per month. You also have to sign up for at least 6 months. Included in this plan, you will get multiple profiles, campaign management, reporting (although it is a bit disappointing), advanced searches, unlimited results, lists and campaigns. Influencers also have only two options: the free plan or the Pro plan for $4 per month (billed annually).