It might be time to rethink the descriptor “Influencer Marketplace.” Or, at least, create a new category that differentiates between the marketplace of old and the newer, much more robust ones being released these days. Right or wrong, the marketplace is often thought of as an influencer marketing cheat—a way to quickly connect with popular social creators and activate them into campaigns even more quickly. It bypasses the relationship-nurturing that is so fundamental to the authenticity of influencer fueled campaigns, while valuing quantity over quality as the makers of these platforms onboard creators. This, critics say, devalues influencer marketing as a whole. And, for many of the marketplaces I’ve seen over the years, it’s a valid criticism.

But I bring all of this up here to demonstrate how much of a contrast inzpire.me is to this oft-repeated perception. Especially in the last year, I’ve had the opportunity to see some self-described marketplaces that have really advanced the concept, and inzpire.me is the latest to do that. And taking the platform for a spin is what prompted me to think that we need some kind of differentiating category as a shorthand to say to those who would dismiss it, “This is not what you think it is.” It’s not so much a marketplace as it is a “marketing place.” As in: you can get some serious marketing done in this place.

inzpire.me was co-founded by Mats Lyngstad and Marie Mostad, who launched the beta version in March of 2016. A year later, inzpire.me achieved “Big in Japan” status after being named a winner at SLUSH Tokyo. Their growth hasn’t stopped since then. The award at SLUSH put them on the map and they quickly reeled in €1 million in funding, prompting Lyngstad and Mostad to start expanding their presence around the globe.

Another two years, €1.2 million in funding, and 100 countries later, inzpire.me has worked with over 3,000 brands to date. Their client roster is an impressive Who’s Who (or, if you don’t believe corporations are people, a What’s What) of big named brands and non-profits alike: Coca-Cola, McDonald’s, Unicef, and Greenpeace are some of their customers who you’ve definitely heard of. They’ve been growing at a steady rate, and when you get into The Details of what they’re offering, it’s easy to understand why.

inzpire.me
You can find more than just influencer with big following on inzpire.me. Like a dating service, their Personality Trait Analysis will tell you how good a match someone is for your brand.
Pros and Cons
“Personality Trait Analysis” determines how well an influencer matches brand voice
Simplified payments are handled monthly via a single invoice
Interactive project management board is great for managing influencers through the campaign lifecycle
Charges influencers a 10% fee on payments, making the platform a hard sell to them
Best for: Small and Medium Brands
Ratings
Features
4.5
Ease-of-Use
4.5
Features
4.5
Overall Score
4.5

inzpire.me offers two levels of subscription for its self-service plans, as well as a full-service offering that puts their team of marketing specialists in charge. This review only covers the self-service product, but pricing is included here for the full-service for those interested.

If you noticed a very large discrepancy between the price tags of the two self service plans, you’re not alone. It does seem like quite a large jump for two more features and an easier way to pay influencers. It bears noting that those two features are the most processor intensive of the lot, especially the Personality Traits Analysis. I’ll go into greater detail on what that is in The Details, but for now it’s enough to say that it relies on AI to make some very human assessments. Also, it's no small detail to have the dedicated Success Manager, who trains and supports customers on using the platform, and guides them through influencer marketing in general.  In that light, the Premium plan’s cost is entirely justified. If anything, the big gap in price between plans shines a light on just how affordable the Essential plan is, not how expensive the Premium plan is (which is priced competitively when compared to similar platforms).

One area of pricing that is less than ideal is with payments made from brands to influencers. Brands aren’t charged any fee for making payments—and that’s good news for brands. Instead, the cost of this becomes the influencers’ responsibility. That fact on its face isn’t such a bad thing since it does cost money to send money. But the 10% fee inzpire.me charges is just too much (and I’ve leveled this criticism at numerous platforms in the past). Services like PayPal and Venmo let you do it for free if it’s a “cash” transfer. Taking credit card payments incurs fees between 2.5% and 3%. Yes, it’s a logistical nightmare for brands to manage several different payment methods for hundreds of influencers—but that just means streamlining payments onto a single platform, with a single invoice, is a benefit for the brands. So why do the infuencers have to carry the burden of paying for it? And why does it cost more than three times the going rate compared to all the major payment platforms?

With over 10,000 influencers are already connected to inzpire.me, brands will have no problem finding suitable candidates for any campaign. The search function for Discovery is as you would expect and certainly up to the task of quickly identifying matches. Brands are also free to onboard their own influencers. This can be either ones they’ve already worked with, or ones they’ve found through alternative discovery tools. It can even be influencers they’ve never heard of before: one excellent feature inzpire.me gives its clients is the ability to create branded portals where influencers can sign up to collaborate.

The idea of a sign-up portal is nothing new, but the way inzpire.me goes about it is both efficient and clever. Many marketplaces offer features like this, but it’s often to get influencers to apply for a specific campaign. This isn’t the case here; instead the portal acts as a front end for general recruitment. This being 2019—meaning, a year in which becoming an influencer is an actual career choice people make—brands often get inundated with requests via DM or e-mail from creators looking for opportunities. Going about it this way requires brands to do their own research on each applicant, one by one, by looking at their social profiles and making assessments based on that. The problem with this is—apart from being a time consuming endeavor—is a lack of data and analysis on which to make their decisions. When creators apply using an inzpire.me powered portal the platform can ingest all their data through APIs, giving brands the opportunity to make a much more informed decision. Now, companies need only peruse the list of incoming requests that appear on the platform, and all the information they need is available with a single click. From there it’s just one more click to accept or decline and the platform notifies them with a pre-written message. 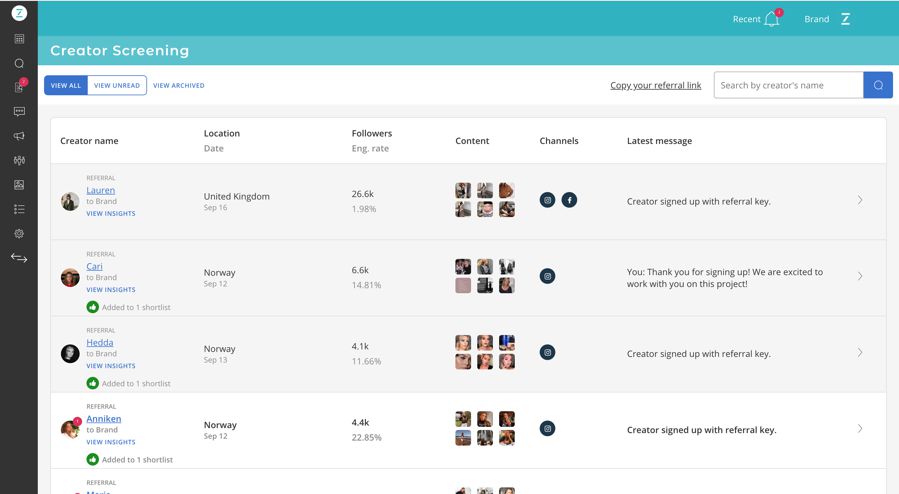 So what kind of data does inzpire.me show you to give a clearer picture of the influencer? Apart from the standard performance metrics and examples of their posts, it also includes insights to their audience. There’s a feedback feature on the platform that allows other brands they’ve worked with in the past to review them, and you’ll see their overall rating (one to five stars). You’ll also see their average fee based on past collaborations to give you an idea of the cost (and you can always check that fee against inzpire.me’s Instagram Pricing Calculator). 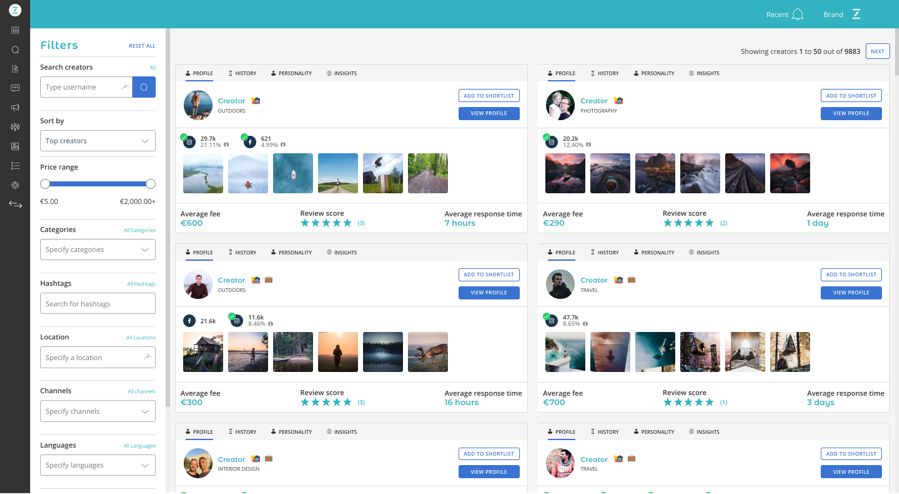 But the coolest—and possibly most useful—bit of data happens with inzpire.me’s Personality Trait Analysis. When brands sign on with the platform and connect their social accounts, inzpire.me’s AI engine analyses all the captions for all their and creates a personality profile. Is the brand voice down-to-earth or imaginative? Consistent or adventurous? Solemn or cheerful? There are eight different criteria it measures for, and places the result somewhere along a spectrum between the two opposing traits. This same analysis is performed for all influencers in the system, and you’ll be able to see how closely aligned your personalities are. This is a huge step from the marketplaces of old. 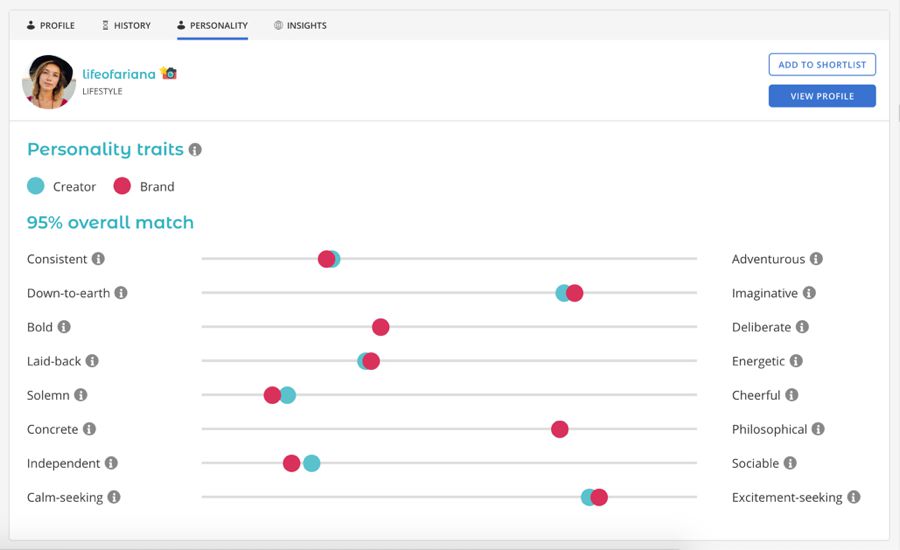 Campaign management features are also another standout. Creating a campaign is much easier here than on other marketplace platforms, thanks to the inclusion of several customisable templates depending on what your goal is: raising brand awareness, generating sales, driving app downloads, and product reviews are some examples. Each template is extensive and thorough in laying out the idea, requirements, and rules of participation, and it’s easy to just “fill in the blanks” and be on your way. You can also make copies of these templates and edit them whatever way you see fit—e.g. removing irrelevant sections—so you can reuse your custom version in the future. Or, just create an entirely new one from scratch.

With campaigns underway, inzpire.me’s collaboration lifecycle management tool gives you a bird’s eye view into all the influencers you’re working with and where they’re at in the scheme of things. Unlike other similar tools which allow you to drag an influencer’s “card” between the stages of their involvement—from a pending invite through to payment—inzpire.me’s implementation is a more dynamic and interactive affair. Not only will you know that an influencer has accepted an invite, but you’ll be able to see if you’ve got any messages from her, add a label (to see, for example, that received product delivery for a review), change due dates, and more. You can do this on individual or bulk level, and it’s an incredibly scalable way to manage multiple collaborations at once.

When campaigns are completed, you’ll have access to all the content created on your behalf in the Content Library. This is something that many other platforms have, but it’s also something that inzpire.me has gone an extra step with. Content can be pushed directly to your Facebook ads repository for future use in paid promotions. 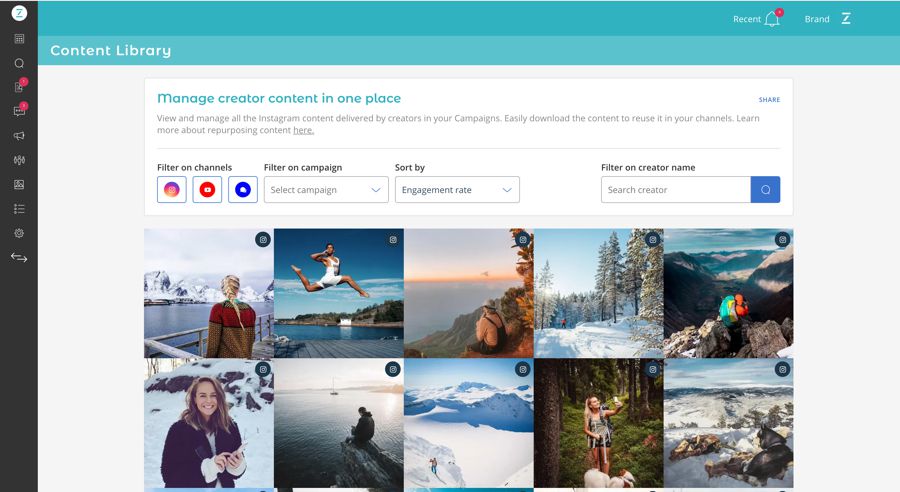 Finally, reporting gives you another interactive way to understand the impact your campaign has had. Reports can be broken down by campaign, channels within that, and within a specified date range. You’ll understand not only how they are performing (and identify top performers), but you can see how much you’re spending and how much getting for your money with key metrics like CPM. 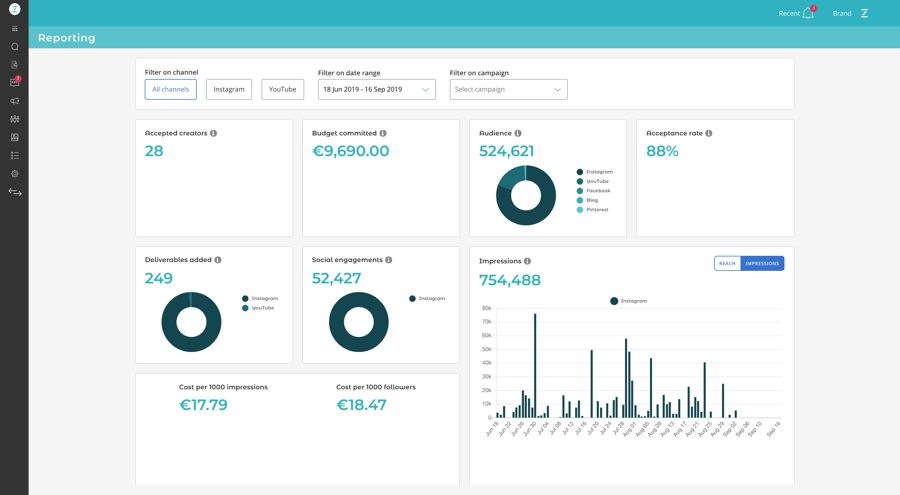 It’s always a good sign for a platform when I have to wind these reviews down and still feel like there’s more to say. That’s the case here: I’m already 330 words past what it should take to thoroughly describe what a platform can offer. Yet, inzpire.me has more going on than what’s described here. I’ve covered the highlights—those features that make it unique and, in some cases, innovative. Still, there’s more to cover, and if you’re in the market to find something efficient, affordable, and already road-tested by multiple bug name brands, inzpire.me is something you should take a look at.

They’ve created something that takes the idea of a marketplace and grows into something much more than a simple, transactional frontend. And that growth shows no signs of slowing down.