Let’s get a couple things out of the way, before we get too deep. First, ivvi is pronounced “ivy,” like the plant. Also, it’s an acronym, standing for Influencer & Viral Video Insights. Finally, the website domain is a phrase that isn’t who the company is but what they do. This all flies in the face of Branding 101, which dictates uniformity and consistency throughout the so-called “customer journey.”

While there’s something to be said for that, Taylor Klick—ivvi’s founder and CEO—puts more faith in data. And, according to her, the data says it’s a lot easier for people to find her website by leaving the company name out of it. Replacing it with the keyword phrase her potential customers are searching only made sense. And she must be right, because brands—big ones—are finding her, like Samsung, Universal Studios, Live.Me, and Musical.ly.

Like many of the present day influencer marketing tools, Ivvi began life as something else. This video on YouTube from early 2015 promotes a user app to easily see, save, and share trending videos on YouTube. This video did not trend, and the app is no longer available. Whether by force or by choice, ivvi transformed itself into something much more useful and relevant. By tracking YouTube trends, they ended up with a foundation of data that became the fuel to what ivvi does now: predictive analysis of YouTube creators and videos.

This is ivvi’s big differentiator: their algorithm mines enormous amounts of data from YouTube, identifying what’s going to catch on big before it does. This could be a trend, like the Mannequin Challenge, or it could be an actual influencer on the rise. Like many influencer platforms today, ivvi focuses on micro-influencers. Or, more specifically, micro-influencers who their algorithm predicts are about to get much bigger. 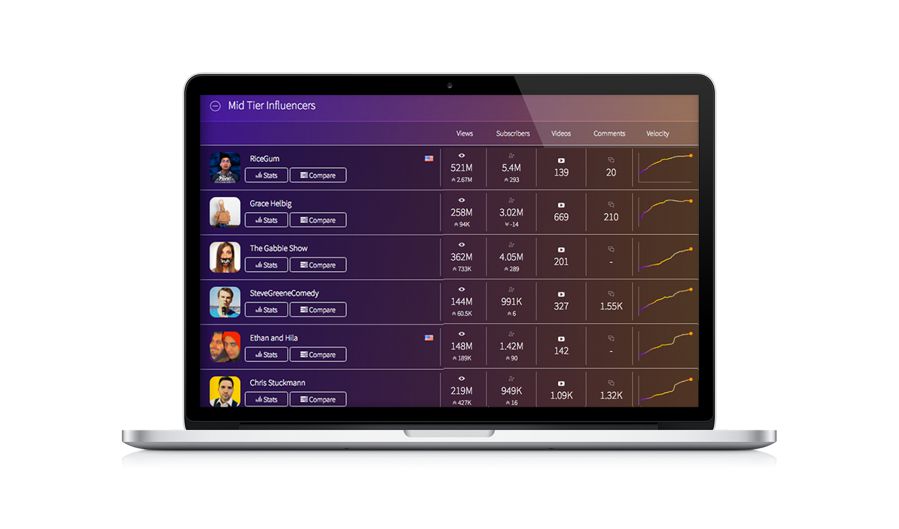 To put this in practical terms for brands, this means having the ability to jump on a viral trend before it goes viral. The potential is there to work with a creator at micro-influencer rates and get a return that’s Kardashian-level legit.

ivvi
At a time when marketers were focused on big reach and engagement on Twitter and Facebook, Ivvi went deep into predictive analytics on YouTube, its data, and its audiences to spot viral trends before they happen. It’s 2021 now, and only one of those paths is still relevant (spoiler alert: it’s Ivvi’s).
Pros and Cons
Platform learns from brand users what appeals and then starts feeding content suggestions—which get more relevant over time
The “Ivvi league” score assigned by the algorithm lets you know who is likely to go viral and reach a wider audience
Because these influencers haven’t yet hit it big, they come at a lower cost
Finding influencers is a slow process that involves weeks of browsing through content
Ivvi might be a little too programmatic (i.e. rigid)
Best for: Medium and Large brands
Ratings
Features
4.0
Ease of Use
5.0
Reporting
4.5
Overall Score
4.5

Ivvi is offered on a subscription basis, at two levels of service:

Ivvi bills itself as “creating higher impact video strategies with science.” That’s data science, of course, which is at the heart of the algorithm they use for predicting YouTube glory. But even the ivvi approach to influencer discovery and campaign development is highly programmatic. As part of the company’s pitch deck for the platform is a slide detailing the step-by-step strategy for creating campaigns—it isn’t until week 12 that contact is made with influencers to start publishing content.

What happens during that 12 weeks is twofold. First, the ivvi platform has been set to start tracking and analysing videos that meet criteria set by the brand. In parallel, the brand begins developing its campaign strategy (with ivvi, if they are at the Strategy Pro level subscription). For the purposes of this review, we’re more concerned with what happens on the platform itself. And in this respect, at least as far as influencer discovery is concerned, ivvi functions very differently from your standard search-and-activation tool. 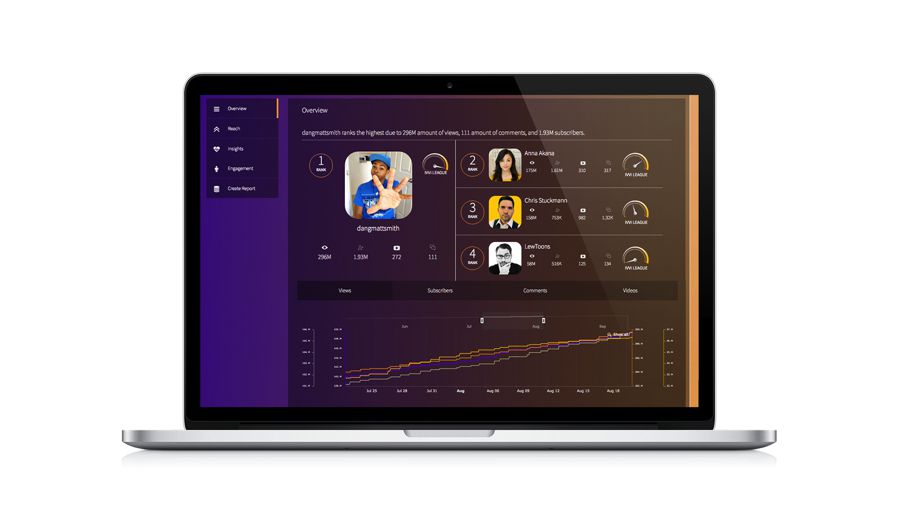 Influencers are found less by a search, and more by developing a disciplined practice to browse through ivvi’s dashboard feed each day. This is my main criticism of the platform. You’re shown content that ivvi’s algorithm has identified as trending, created by influencers ivvi thinks will get big. But the interface leads with the videos, not with the creators. You can filter your criteria down in 10 different ways, and view trending videos (and their creators’ stats) in each category. These filters can be to find specific kinds of content, like Contests or Challenges, or can be broader and industry-based, like Beauty or Gaming. As you select videos that appeal to you, either because you’ve watched them or because the thumbnail looks good, you can then drill down into the creator’s profile and learn more about her. If she looks like a potential fit for a campaign, you can add her to your favorites and start tracking her. And so it goes like this over the course of several weeks—as you add more influencers to your favorites, the recommendation engine becomes more personalised. Taylor Klick describes this activity as like a morning routine, where marketers sit down with their cup of coffee and, instead of reading the news they look at YouTube videos. That’s great, but what about those of us who like to actually read the news with our morning coffee? It’s kind of a clunky and inefficient design for the way brands and marketers want to spend their time. 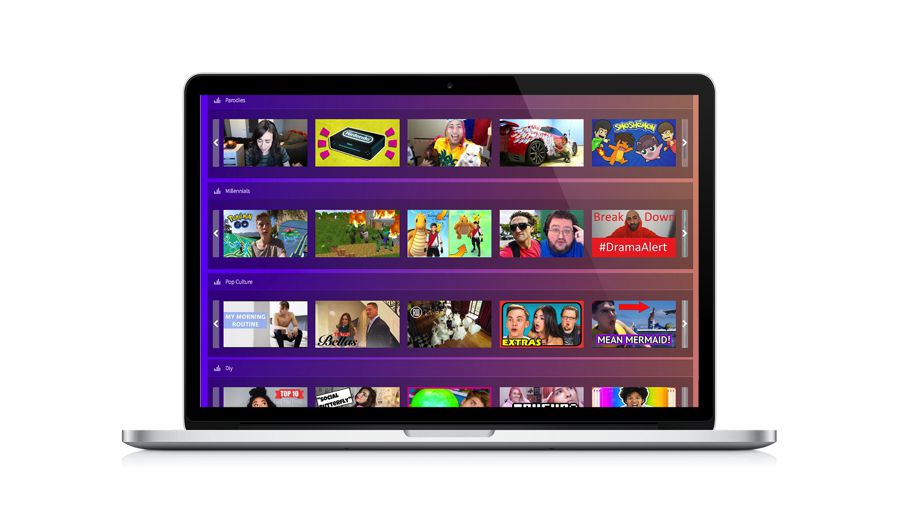 As you approach the time to start creating and curating content, you can use ivvi’s Insights tools to start comparing influencers against each other. With it, you can not only compare their basic stats—subscribers, views, comments—but you can also look at their growth “velocity.” This is a graphical representation of their account’s growth over time, which can give you a good idea of what their near future is going to look like. The graph shows steady growth over time without leveling, you can reasonably expect more of that. If the graph is leveled off, they may be at their peak. You know what to do if they’re dropping.

These graphs are helpful for quick glances, but there’s more data that goes into it than just growth. It forms the basis for what the platform calls it’s “ivvi League” score. This is where the predictive nature of the platform comes in: the higher an influencer’s ivvi League score, the more like her content will go viral. In this context, “viral” doesn’t just mean a world-epidemic of Gangnam Style proportions. But a high ivvi League score can mean that content filtered through that influencer will likely reach a much greater number of people than are currently connected to her. And because you’re dealing with influencers at the micro-level, costs are lower—enabling campaigns to span employ dozens of influencers at the same time. If each one has a high ivvi League score, your content could start racking up views left and right. 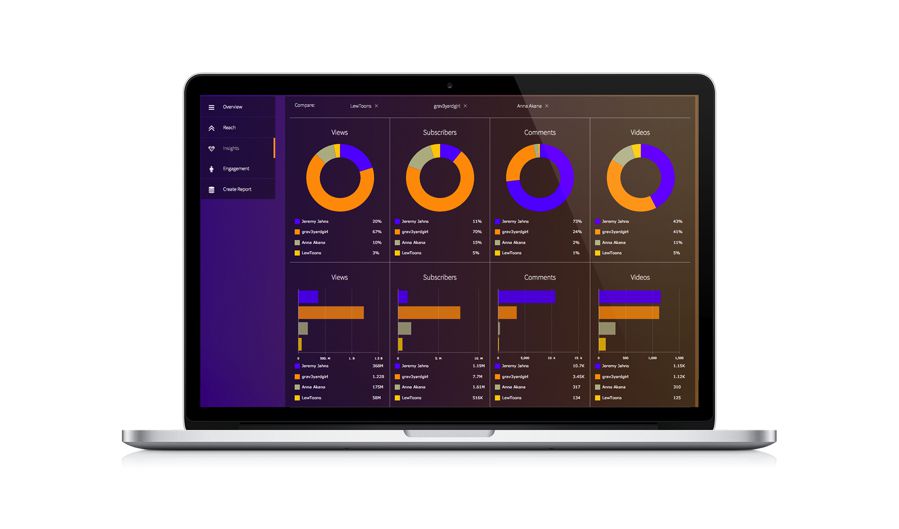 Beyond all that, and once your campaigns are in full swing, you can start tracking the metrics of each of your influencers’ posts. The analytics engine is robust and offers a great deal of insight into the performance of each influencer, as well as into their audiences (this is available through all stages of the ivvi process). ivvi’s whole philosophy is based on a reliance on data, and empirical evidence, and the reporting engine bears that out.

It’s promising technology, to be sure, and apart from a few minor quibbles about functionality—there’s no way to organise influencers you’re tracking, the “per-campaign” limitations of the pricing—the only functional criticism I have is the unstructured way in which you go about searching for influencers. I also wished I had more assurance that the platform works as advertised: ivvi’s website has no case studies or success stories that I can point to to backup my enthusiasm for the platform itself.

There’s a blog post on their site about YouTube star Logan Paul’s latest video going viral—it’s surpassed 70 million views as of this writing (35x his previous average). However, it’s unclear from the post whether ivvi had anything to do with that beyond measuring the metrics (nor is there any mention in the post that ivvi even predicted this success). At this point, I’m willing to take it on faith that ivvi works as advertised; large companies don’t allow their names and logos onto other companies’ websites on a whim, so ivvi’s inclusion of big names in their client list should stand as testimonial for now. The software works, shows impressively deep reporting, and most importantly: the company itself has a vision that demonstrates a knowledge of how influencer marketing gets done right. If you’re looking at YouTube as the primary channel of your influencer marketing, ivvi should be on your short list of tech to check out.