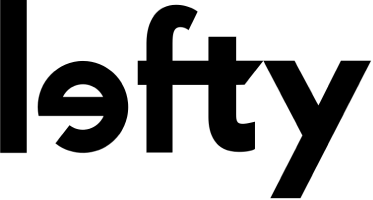 It’s estimated that only 10% of the world is left-handed, so the odds that the three founders of the Lefty platform would share this trait were pretty slim. As a lefty myself, I can tell you that we notice each other, and quick. When business agreements are drafted and people start signing documents, a lefty looks to see what hand you’re using to sign. The three founders—Thomas Repelski, Roman Berenstein and Christian Rivasseau—are no different. They all made note of each other’s signing hands, and it became the one obvious name for the company they formed.

Lefty launched as a not-fully-formed platform, but our last look at it showed it was still very much a solid entry into the marketplace of Marketplaces. It took the basics further than many did: It had the ability to retrieve and track Instagram stories, which was a big deal at the time. It’s still a big deal, but Lefty was one of the first to do it. Its database of influencers wasn’t restricted just to those who’ve signed up for Lefty accounts. Like a true discovery tool, Lefty’s influencers are found by algorithms that comb through Instagram, indexing all the accounts that meet the minimum reach of 3,500 followers. This data is monitored and updated in real time, and their AI engine categorises the content and indexes the profiles of one million influencers and counting.

As time has gone on, the platform has attracted more high level clients—brands like Sephora, Tommy Hilfiger, Louis Vitton, and H&M. Looking at Lefty today, it’s clear that whatever revenue they’re getting is going right back into the development of the platform. It’s been greatly fleshed out with more advanced campaign management and measurement tools, deeper analytics, smarter reporting, and overall facelift to the UI. It represents a big step forward for a company that was already forging ahead quite nicely.

Lefty
Lefty began life as a influencer marketplace with too many influencers and not enough features; over time they’ve reversed all of that, purging all the low quality influencers from their roster while building a much better platform.
Pros and Cons
Actively monitors influencer roster and purges low quality ones
Very good influencer management tools
Campaign reporting gives plain language analysis and insights
Competitor analysis reports offered at an extra cost for static data
Best for: Small and Medium Brands
Ratings
Features
4.3
Ease of Use
4.5
Reporting
4.3
Overall Score
4.3

Lefty offers four levels of service, and nearly every feature is available on all of them. The only thing missing from the lower tiers are a dedicated account manager and access to competitive analytics. Other than that, all plans offer the same features and scale strictly according to size.

A note on those competitive analytics: the reports aren’t covered by the plan subscription costs. Instead, you’ll notice that the three top tier plans offer “access” to them. Meaning, you’re shut out entirely from them on the Standard plan, and the other three just offer the option of purchasing them for an add-on cost. Each report covers up to 5 competitors.

There are also A La Carte offerings, if you need to add users, campaigns, or audience reports but don’t need to go all the way to the next tier:

At first login, the minimalist interface is helpful in getting a user grounded quickly. Searching for influencers is easy, and the search function itself is incredibly quick and responsive. Search a hashtag and the results appear almost instantly. Further refine that search—which you can do based off familiar criteria like categories, follower count, brand mentions, and location—and there’s still no latency. The size of Lefty’s database means you’ll have a lot of influencers to sift through, but you can always add more criteria to narrow the list. 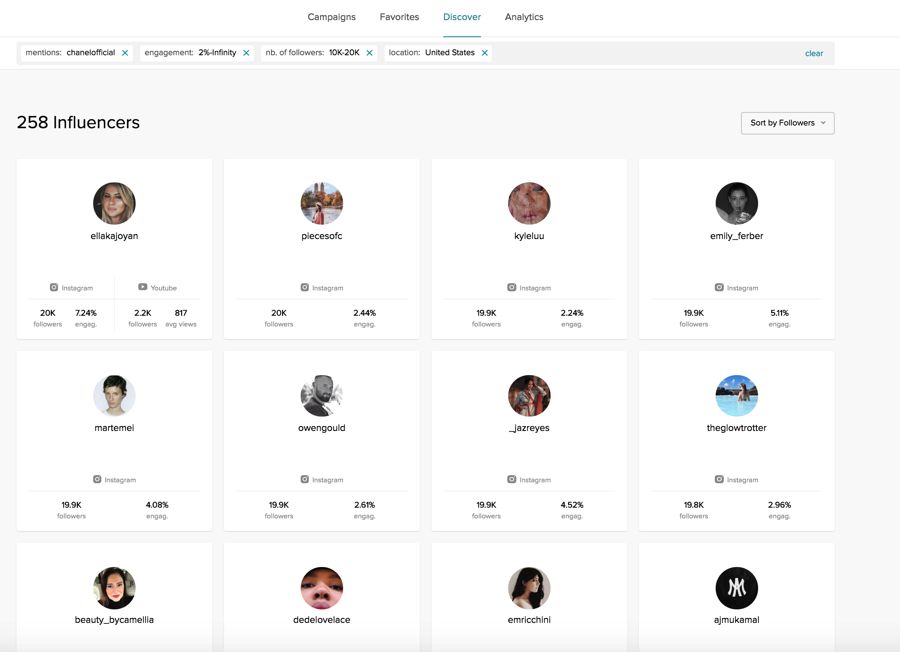 Kudos should also go to Lefty for its recent cleanup of their influencer database. Not too long ago, the platform hosted the profiles of over six million influencers. In an effort to offer only the highest quality influencers—and to keep their software running smoothly and quickly—the team undertook the task of purging many of them. Over five million influencers were purged from the system: those who didn’t perform well in campaigns, those with less-than-ideal audience credibility, and those who were inactive all got the boot. Brands are getting much higher quality results from their searches, and top performing creators aren’t getting lost in a sea of lower quality profiles.

You’ll get a nice amount of data on each influencer if you want to look at them further. You can see their big stats like reach, average engagement, average likes and comments, as well as minimums and maximums for each. You’ll see the accounts they mention most and the accounts who are mentioning them—good for finding out if they’ve collaborated with other brands before, as well as a way to find yourself similar/connected influencers. You can’t search by audience data, though, which is a bit of a letdown because that data is there. You just have to run those audience reports to get at it. 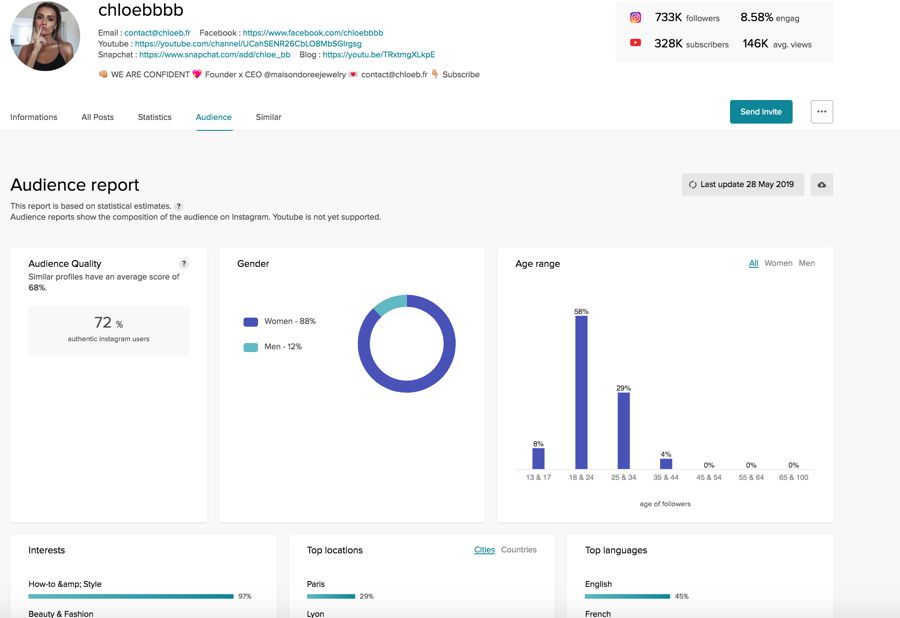 After searching,if you like what you see, you can add them to an existing campaign (or create a new one on the fly). Setting up and managing campaigns is also quite simple: the platform guides you through the initial setup as you give it a name and a target reach, then define the hashtag and/or user mentions you want to track as part of the monitoring. From there, it’s the standard procedure of creating a brief, publicising it, and reaching out to the influencers you’d like to work with.

One big improvement in Lefty’s campaign management tools is its newfound ability to manage and message influencers from activation through to the end of the campaign. In earlier versions it was a more ad-hoc approach, but now the whole process feels all grown up. The minimalist interface is a plus here, as well, as you’re not confronted with a busy looking list, and you can filter down to any status to make quick work of understanding where you’re at.

Lefty’s management tools do a good job of keeping things centralised and organised. The messaging system—which you’ll use to track your influencers’ status/progress once they’ve signed on to participate—is especially useful for bigger teams that all need visibility into what’s going on.

Once your campaign is underway, Lefty’s performance reporting really shows off the platform’s newfound focus on data and insights. It doesn’t just offer you numbers, but includes some plain language analysis to summarise how things went. It also gives you great insights into individual influencers’ performances, including the calculation of Earned Media Value for each one of them. At the end of every campaign, you’ll know how you did as a whole, but you’ll also understand—in financial terms—the impact of each person on an individual level. You’ll be able to start building lists of your most successful collaborations, while culling out the ones who didn’t meet expectations. As you start curating these collections of influencers with high EMVs, you’ll start getting more bang for your buck with each successive campaign. 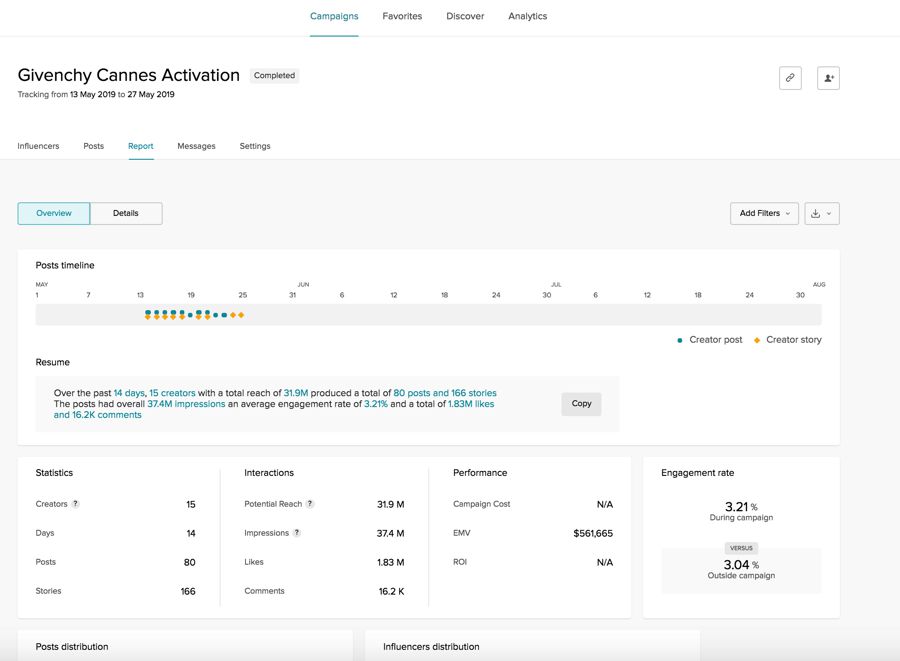 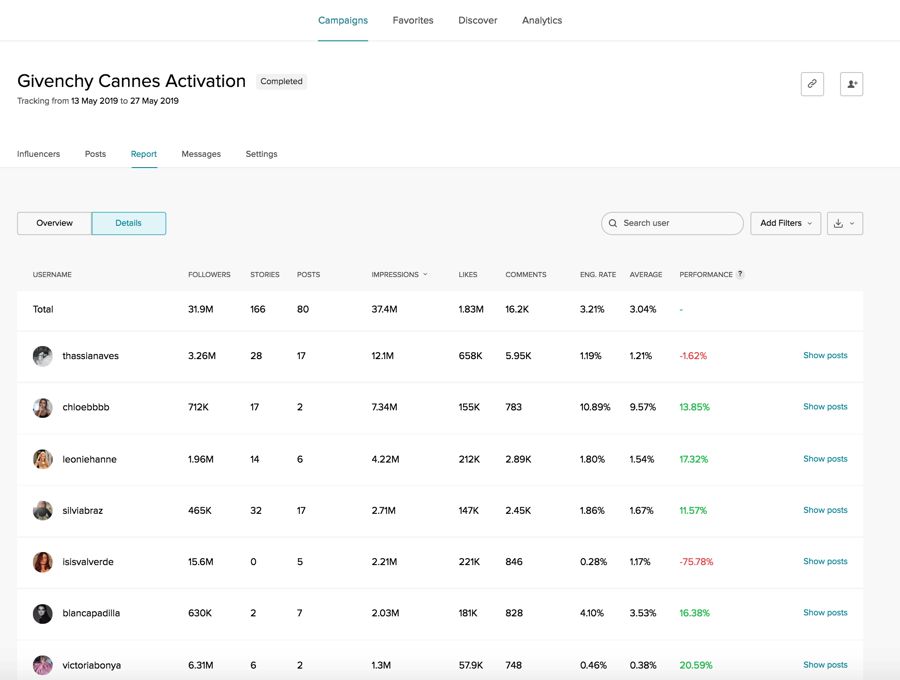 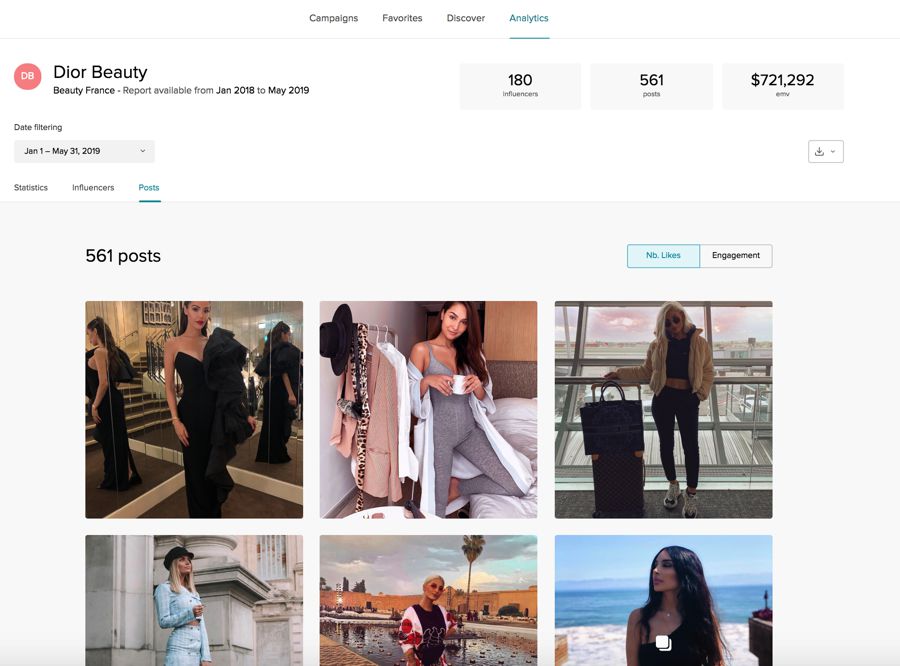 With its improved data and insights, Lefty also introduced their “Competitive Analytics” feature. There’s no doubt about its utility, though I’m a little torn on the extra price tag to access these. I don’t begrudge Lefty its decision to offer these as an extra charge even if their own competitors are including these with subsctiption fees. The base subscription rate of Lefty is more affordable than many of the platforms who offer a similar feature, and the platform does much more than basic social listening tools that give you these competitor insights. The trouble is that these reports show static historical data, social performance metrics that reflect the landscape as it is in the moment. That’s great for helping shape whatever campaigns you’re working on right now, but not very valuable a few months down the road—you’ll have to shell out for another report to avoid working with old performance data. That said, the reports give you excellent insight into your competitors’ social marketing. Placed in the right hands, these analytics could end up paying for themselves in the form of EMV by allowing marketers to spend their money on influencers wisely. 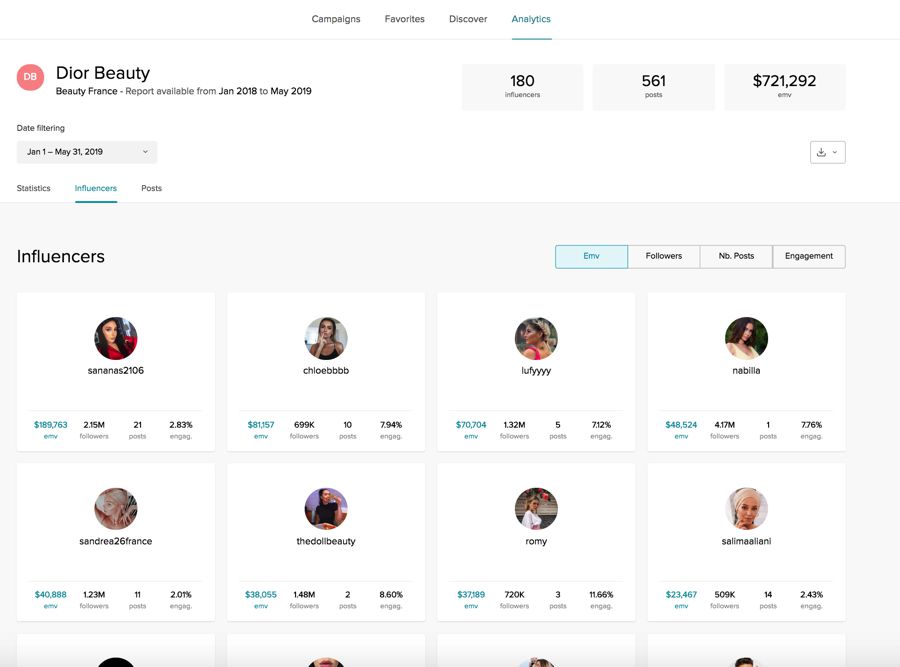 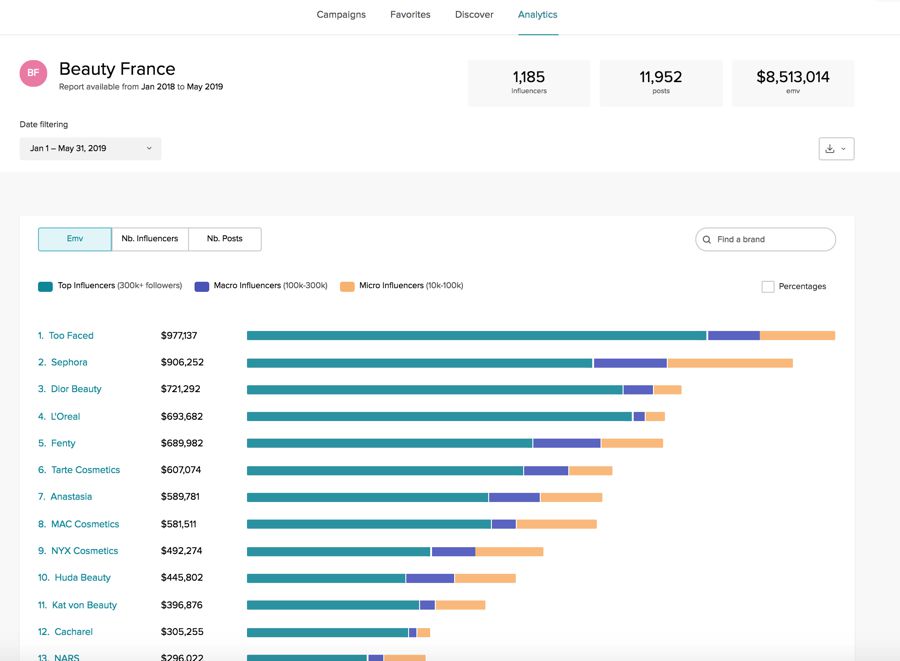 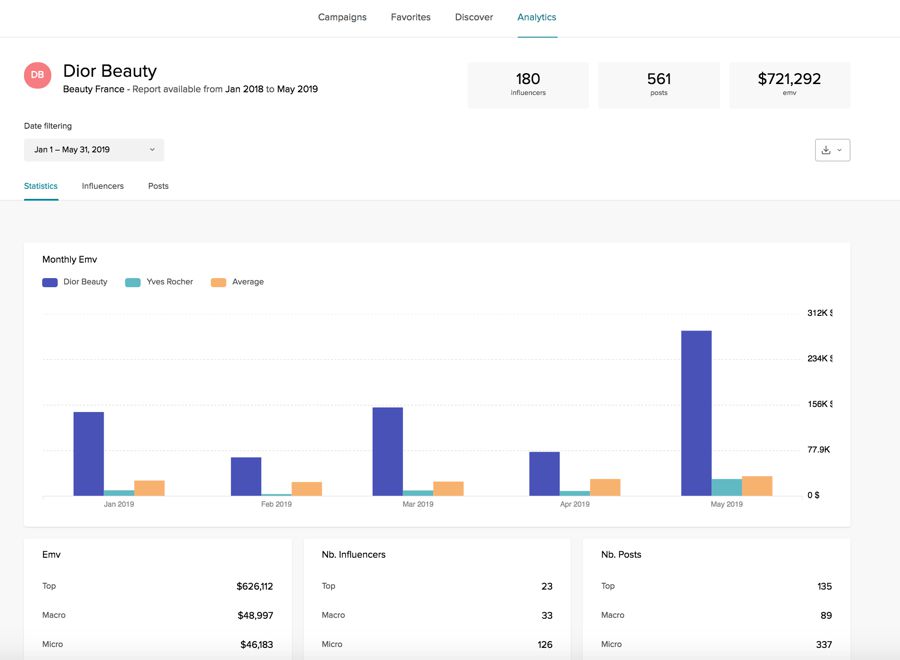 The market for marketplaces has leveled off some in the past few years, as the industry is shifting away from the low-effort transactional nature that the first platforms of this kind emphasised.

Lefty itself can’t really be called a marketplace, but its clear that they were inspired at least by the concept of an end-to-end platform that guides brands from Discovery straight through to Campaigns and Reporting. By opting out of the “opt-in” mentality, Lefty offers marketplace functionality on a greater scale. But as their recent purge of roughly 5 million influencers from its database, they’re signalling that that they value quality over quantity and a more thoughtful approach to influencer marketing than a marketplace generally offers. In the end, Lefty gets it Right.