NeoReach has its origins on the campus of Stanford University, where CEO Jesse Leimgruber  first pitched the idea. Still a teenager, Leimgruber laid his vision for a digital marketing platform to his classmates, professors, and some venture capitalists for their Technology Entrepreneurship class. He saw NeoReach as a way to connect social media influencers with brands directly. The original idea functioned more as a marketplace: brands would post products or services they wanted promoted, and influencers were free to set their own rates on a per-click basis. NeoReach monitored all the traffic, and automated the process of getting the influencers paid for their performance.

The idea, as he saw it, killed two birds with one stone. Influencers were already talking about products they love as a natural part of their online presence, and brands struggled with all the manual processes around executing influencer marketing campaigns. The idea struck a chord, as well it should have, and the budding entrepreneur was accepted into Stanford’s accelerator program to work on realizing their vision. By 2014, NeoReach had received over $1.5 million in seed funding with the founder putting his academic careers on hold.

Fast forward two and a half years, and NeoReach is a profitable company with a roster of Fortune 500 clients and a tweaked version of the software they presented back in their Stanford days. The whole notion of cost-per-click payments is gone, as is NeoReach’s role in facilitating payments of any kind. Influencers are still getting paid, but those fees are negotiated and settled between them and the brands. They’ve also opted out of letting influencers opt in to the service. Instead, they’ve created an algorithm that mines the social web for data, and indexes it for search through the platform. This automated index accounts for the over-3-million influencers in the NeoReach database. But that number alone isn’t enough to account for the growth and success of the platform. Beyond the database, there are a wealth of features tailor-made for nurturing influencer relationships and managing campaigns.

NeoReach
What began as the brainchild of a Stanford student is now a respected veteran in the influencer marketing platform landscape. It’s bread and butter has always been highly detailed and precision discovery tools, which then branched out into an enterprise level full-suite marketing platform targeting Fortune 500 companies.
Pros and Cons
Millions of data points to search through for highly relevant discovery results
Influencer recommendation engine is on point
Influencer Media Value (IMV), their proprietary metric, clearly demonstrates ROI
Some customers complain of a lack of micro-influencers indexed on the platform
Best for: Large Brands, Agencies
Ratings
Features
4.5
Ease of Use
4.5
Reporting
4.5
Overall Score
4.5

Using the NeoReach platform requires the purchase of an annual subscription. There are different levels of service, but not in the traditional form of Small, Medium, and Large subscription plans. Instead, every client gets custom pricing based on the number of users and a few other factors. For this reason, it would be impossible to report any specific pricing to you here. NeoReach’s target customers are large companies with large marketing departments—this software most definitely is not an option for small or even medium sized businesses. Annual subscription fees can run anywhere from $50k to $500k.

At the heart of NeoReach is data. A ton of data. As I mentioned before, its influencer database contains over 3 million people—and it has a mind-boggling array of information for each one of them. An influencer search begins with a keyword, any keyword, and NeoReach searches through all its influencers and their posts finding a match. Results from this search can be refined even further by:

The interface is clean, and working with search results—like organising influencers into groups or campaigns—is all very simple, even with the wealth of information attached to each profile. Still, with a database that size, you’re not going to uncover all your perfect matches through a simple search. Users also receive recommendations from the platform itself, powered by AI that uses your performance data coupled with a brand affinity search. The more you use NeoReach, the better its recommendations will be. 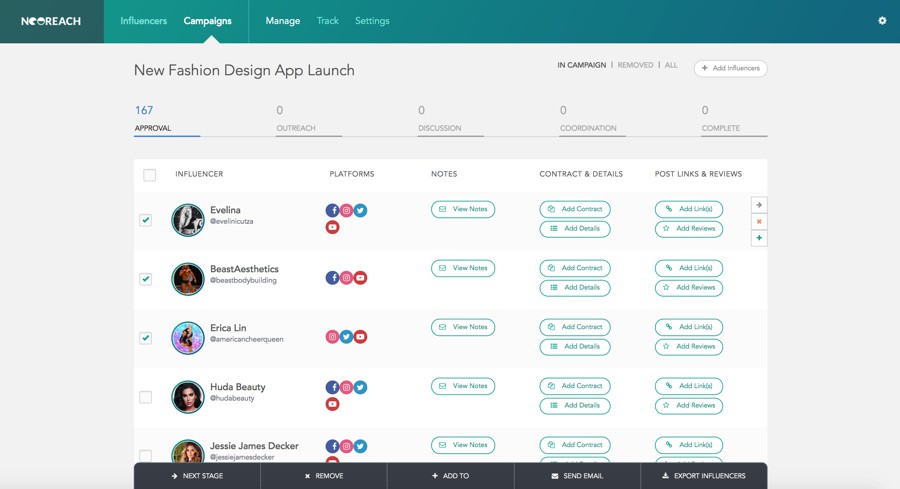 NeoReach isn’t just a search engine, though. It also includes all the campaign management tools you need to keep up with your marketing efforts. First, the platform acts as a centralised communications hub—from initial contact to the negotiation phase, NeoReach’s messaging function makes it easy for all team members to have visibility into the entire influencer relationship. The built-in campaign management tools continues this high level of organisation. For each influencer involved in a campaign, you can drill down into your messages, view contracts, and track the progress and performance of content.

Of course, having all that information to search through before a campaign means you’ll get the same level of detail when tracking the performance of campaigns. The reporting out of NeoReach doesn’t give you just the basic stats of reach, engagement, and views—it also drills down into the demographics of your reach and calculates ROI.

It bears mentioning that NeoReach has—sort of—developed its own method for calculating ROI, something they call Influencer Media Value (IMV). IMV is a lot like Earned Media Value (EMV), a calculation which marketers have used for years to demonstrate the true value of non-traditional methods of advertising. IMV does the same, except the formula involves metrics specific to influencer campaigns and sponsored posts. For most businesses, any or all of these numbers could be the result of vague guesswork, rendering the ROI calculation specious, at best. But the large companies NeoReach works with are regularly spending money on traditional print and broadcast advertising channels. They’ve got real numbers to work with, and they need only plug their advertising spend into the software and the IMV for all future campaigns (and influencers) gets calculated automatically. 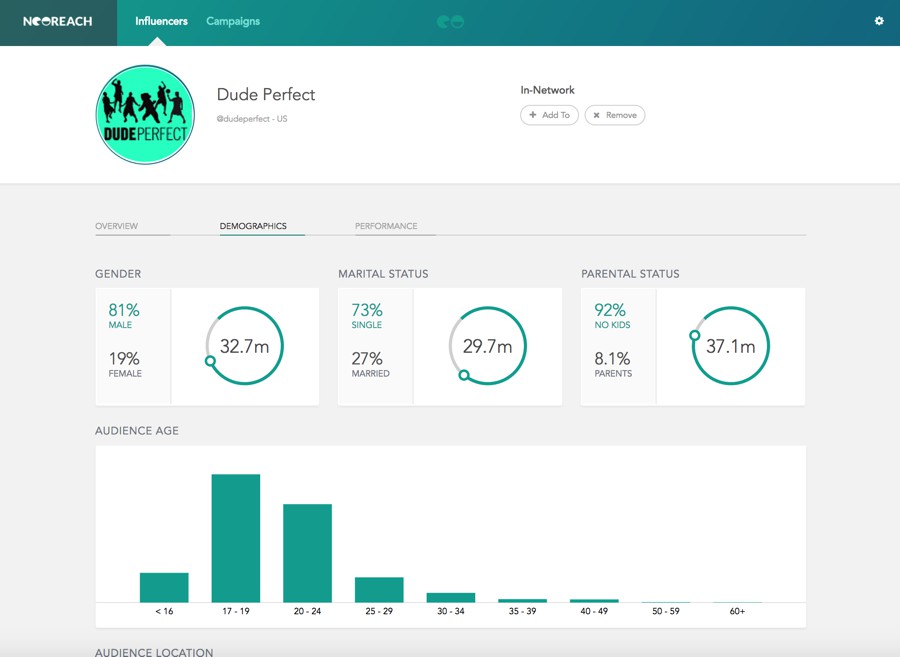 If you’ve read any of our other reviews here, you might notice that this one is a bit shorter than the others. That’s through no fault of NeoReach, except that they didn’t give me much to gripe about. Instead of detailing what’s missing, or expressing what they could do differently, all I can do is give you a straight narrative of what the software does.

I’m not going to pick them apart for being out of reach for small and medium sized businesses, because they’ve chosen to focus on a very exclusive group of clientele—and then made sure that the software satisfied that group’s needs. Basically, they saw a need in a particular niche, and they sought to fill that need. The result is a self-service, but still end-to-end, influencer discovery and campaign management platform, that’s got a growing list of happy customers. By that count, NeoReach is a raging success.

How much does NeoReach cost?

You need to purchase an annual subscription to be able to use NeoReach. While there are different levels of service, it is not in the conventional form. Every client gets a custom pricing based on a few factors such as the number of users. Annual subscription fees can be anything between $50K to $500K. So, it is suitable for only big companies with big marketing departments and definitely not for small (or even medium-sized) companies.

Which reports can NeoReach create?

You can create a number of reports within NeoReach. The only limitation is the data that you can get out of the platform, but that should not be an issue as NeoReach offers loads of data. Some of the types of reports that you can create include the demographics of an influencer’s audience, the performance of an influencer on a campaign, and a comparison of multiple influencers across a campaign. For even more in-depth examinations, you can also use API integration with third-party analytics engines.

NeoReach might not be an affordable option for small and medium-sized businesses, but that does not make them unsuccessful. They have simply decided to concentrate on a very exclusive group of businesses and have managed to satisfy this niche market’s needs. They are a profitable company that has a list of happy Fortune 500 clients which only keeps getting longer. Their database has more than 3 million influencers and they offer a huge selection of features customized for managing campaigns and nurturing influencer relationships.

How does NeoReach work?

An influencer search starts with a keyword (it can be any keyword). You can then refine the search results by using filters like age, marital status, occupation, etc. The platform itself will also give you recommendations with the help of AI. It also provides campaign management tools that you can use to keep track of your marketing efforts. The platform acts as a centralized communications hub making it easy to view your messages and contracts and keep track of the content’s progress and performance.

Is NeoReach easy to use?

As the interface is clean, it is very easy to work with the search results, even when there is a wealth of information linked to each profile. The platform itself will also give you recommendations with the help of AI. The recommendations that you receive will become better the more you use it. Thanks to NeoReach’s messaging function, it is also easy for all your team members to see the entire influencer relationship.