As he explained it to me in a conversation about his own platform, the marketplace philosophy can be an extraordinarily dehumanising one. The creative types who opt-in to these platforms aren’t so much rewarded for their ingenuity as they are pit against one another. The end result is what Yeeles calls a “race for the bottom,” in which the quantitative reach of any given influencer matters more than the quality of their content (or even their character). While many view this kind of competition as a natural, market equaliser, driving fees down to a level that marketers won’t regret the morning after, Yeeles sees it much differently.

Influencer marketing works because influencers are people—real ones who’ve built up trust with their audiences in an authentic way. Marketplaces, with their focus on metrics and generating content at scale, tend to remove humanity from the equation. “Imagine if we all went out in public with a series of numbers attached to ourselves, so people knew right away how many friends we had or how much money we earned,” he says. His point is that though the mechanics of an endorsement deal have changed, the goal hasn’t. Companies have always wanted, and continue to want, influential people who best represent their brand identity and values. If endorsements were strictly a numbers game, VisitBritain.com would be paying Donald Trump to tweet on its behalf. (Sad!)

One, it’s one of two social channels that have actually proven effective for influencer marketing. And two, he intimately understands what makes YouTubers successful, having launched the You Generation in partnership with Simon Cowell in 2013. Over the course of its 52 week run, the channel hosted a global talent competition in which everyday people could upload videos showcasing their talents in the hopes of becoming a YouTube star (basically, everything Cowell has ever done, except on YouTube instead of broadcast television).

The launch of the channel went well, and the You Generation quickly amassed around 90,000 subscribers. A few months in, though, interest waned and subscribership leveled off. Yeeles and his team turned to YouTube’s analytics to see what was going on. This deep-dive into the data led to insights that eventually grew the channel five-fold—when TYG signed off after its year-long run, 450,000 people had subscribed and viewed the channel’s content over 8 million times. More important than that, though, was the lesson in how powerful analytics were in optimising content (and growing the channels that created this content). This realisation of the overlap between the cults of personality and data coincided with the growth of influencer marketing, and Yeeles saw an opportunity.

Fast forward a few years later, and Peg is now a fully functional influencer marketing platform that aims to do things differently. Bucking the industry trend, Peg’s focus is on quality over quantity. Having seen what it can do, I can vouch that Yeeles and his team have achieved that.

Peg
Sort of an anti-marketplace, Peg strives to mix the quality and authenticity of slow burn influencer marketing with the familiar functionality of a traditional influencer marketplace.
Pros and Cons
Most influencers on the platform are there via Peg’s partnerships with talent agencies
“Safety Score” helps brands avoid influencers with questionable content and views
Excellent team collaboration tools
Relatively small pool of influencers
Best for: Medium and Large Brands
Ratings
Features
4.5
Ease of Use
5.0
Reporting
4.5
Overall Score
4.7

Because Peg’s emphasis is on quality, which never happens quickly, and so subscriptions are sold on either a six- or twelve-month basis. Pricing for this is entirely custom, based on the size of the business and its needs (and therefore the amount of its anticipated usage of the platform). Once this has been agreed upon, Peg customers get full access without restrictions.

For those who aren’t ready to commit to the minimum six month agreement, they can buy access to the Peg for a one project test option. Again, this is custom pricing tailored to the specific project.

On the talent side of the pool, signing up is free. Individual creators can create profiles, while talent managers and MCNs can do the same on behalf of their clients. Influencers with profiles on Peg (or talent managers/MCNs who partner) get preferential listing over those who are in the database not signed on with Peg. Peg also works with brands to help them find the best influencers, and will take a 5% finder’s fee if the person they’ve recommended signs a deal. 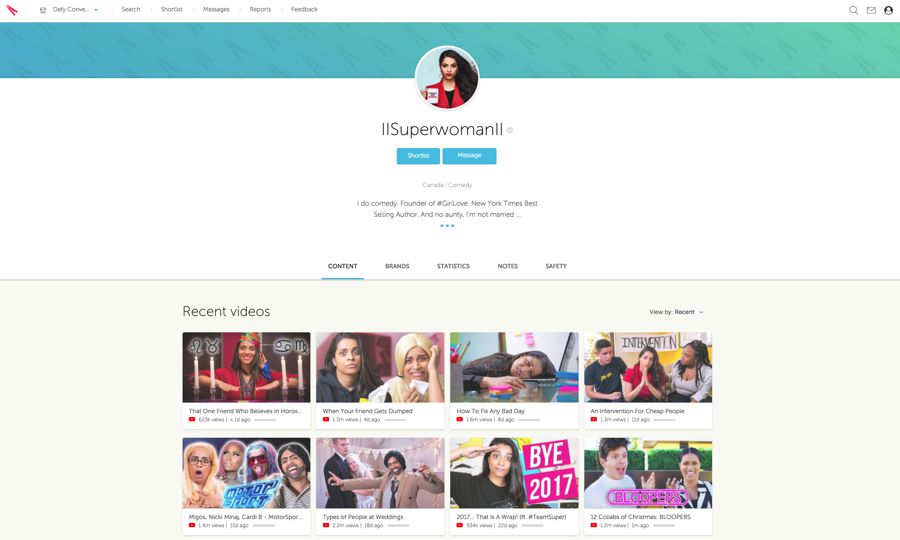 The first detail you notice when you log in to Peg is its—for lack of a better word—vibe. There’s a relaxed, almost sophisticated feeling to the design, one which stands in contrast to the wild west marketplaces Yeeles decries.

The second thing you might notice is that Peg does a lot of the same things that the marketplaces do. You’ll navigate around and see that you have the option of searching for influencers, creating and managing campaigns, inviting influencers to participate, messaging influencers, etc. It’s all there, and so it’s a fair question to ask: what is it about Peg that isn’t a marketplace?

There’s a fair answer to that question: Everything. Sure, there are some familiar bones in its skeleton, but Peg is a different creature entirely. You’ll first notice this as you search for influencers. Yeeles & co. aren’t looking to cast a wide net and scrape for every social media user with a few thousand followers or more. Going up against platforms that boast millions of influencers, Peg is quite happy with its modest count of 33,000+. The goal is to index quality over quantity. To ensure this, the influencers listed on the platform are added in one of two ways:

Influencers on the platform can range from high-paid, celebrity macro-influencers down to up-and-coming micro-influencers. While there’s a debate raging in the influencer marketing community over the value of micro- vs. macro-influencers, Peg eschews the one-size fits all approach that informs such thinking. The best influencer is the one that’s most right for a brand—and that can’t be expressed in context-less numbers. It’s about aesthetic, and personality, and values, and also—yes—numbers. It still matters how big their reach is or how engaged their audience is. But it also matters where that audience is from, and what their interests are. 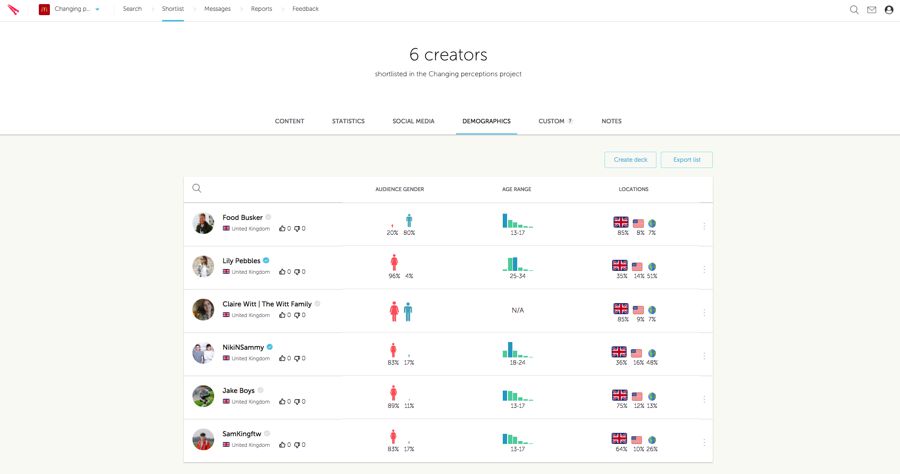 Something else that matters? The person behind the influence. YouTubers don’t go through much a vetting process to become known or famous—if their content resonates with an audience, they get big. Brands are getting weary of finding out too late that an influencer they’ve signed is actually just racist, human garbage. Still, it’s hard to get a picture of who they are from a few pieces of content, so Peg works in the background parsing through all their content and assigning influencers a “Safety Score.” The overall score is based on several criteria—the higher the number, the more family friendly an influencer is. You can dig deeper than just the score though, and look through a list of “Naughty Words” they’ve said in videos (and the number of times they’ve said each. And you can see the trends of public sentiment over time for each influencer using Peg’s “Backlash Meter.” It’s an amazing tool that can show you whether an influencer has a history of upsetting or uplifting people.  For each peak or valley that exists on the meter, you can drill down and see the content that preceded the response.

Still, even the squeakiest of clean influencer might not be the right fit if they’ve already been working with other brands. Peg keeps track of all previous collaborations an influencer may have participated in, which you can see right in their profile page. It’s good to know beforehand if one of your prospects has already posted on behalf of a competitor. He might not have a problem posting for two competing brands, but he runs the risk of compromising the authenticity of his content if he’s taking payments wherever they come from. That’s not going to work for brands, who are doing this precisely because they want that authenticity. But, at least with Peg, they’ll be able to research the audience and influencer enough to be able to find someone similar who’s got no conflicts.

The depth and thoughtfulness of Peg’s discovery engine carries over into their management tools, as well. It’s a true collaborative platform, designed for large marketing teams and agencies. You can see this in the messaging feature—when brands and influencers communicate through the platform, the message window itself looks like a group chat on your iPhone. If members of the internal team want to send private messages back and forth (so the influencers or her representation can’t see it), it still all happens in the same window—you push a button to go into private mode, and the messaging area goes black to indicate that what you’re about to type is for internal eyes only. There’s no jumping back and forth between public and private threads to try and piece together information—everyone on the team has only one place to look to see all communications with an influencer for each project/campaign. 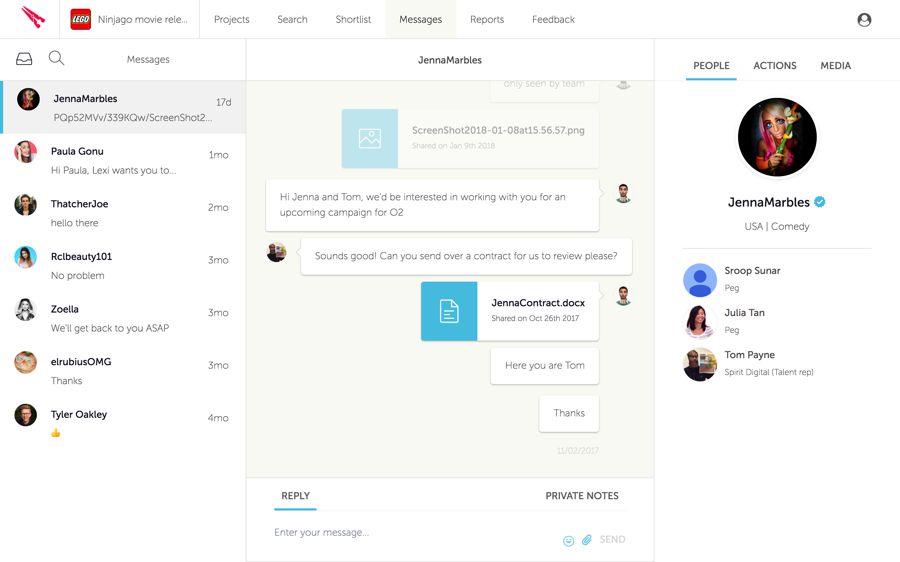 Another great feature of messaging is that you don’t have to be logged onto Peg to communicate over it. Every message typed into Peg gets sent as an email to everyone in a thread; reply to the email, and the message goes back through the platform before being emailed out to everyone again. We’ve all seen this feature used on things like web-based tech support, but it’s rare at this stage for influencer marketing software to use that—and it’s a great touch.

The collaborative touches are all over Peg’s management suite: create shortlists of potential influencers for specific projects, and everyone on that project can contribute. Write notes in the influencers profile, and everyone will see them. Work as a team to create pitch decks of possible talent for campaigns. Have instant visibility into data and reporting as campaign content goes live. And all of this is done inside an interface that’s intuitive and organised enough that it can only set its users up for success.

Maybe the most remarkable thing about Peg is how mature a product it seems. It’s hard to imagine that it was only conceived, as an idea, in 2014. It’s harder still to imagine that as recently as 6 months ago Peg many of the features we’ve listed here as standouts were still being tested. Using the platform feels like you’re using software that’s been around for decades. That’s not meant to say it’s slow or poorly designed (which you already figured out if you didn’t skip right ahead to this conclusion). It’s just that everything it does, it does well—really well—and so there’s this feeling you get that its creators have been doing this a long time and have seen it all.

But they haven’t seen it all—none of us have—because influencer marketing is still in its infancy. That this product is so far ahead of where it should be during its own maturation phase makes wonder what they’re going to with it next. Nic Yeeles thinks influencer marketing as we know it is dying, that the marketplaces of today will fade and die out while Peg is still standing, still innovating its way into the future. We’re not so sure that influencer marketplaces will die out like Yeeles thinks. But we’re certain that, regardless of what happens with the marketplaces, Peg will still be standing, and innovating its way into the future. 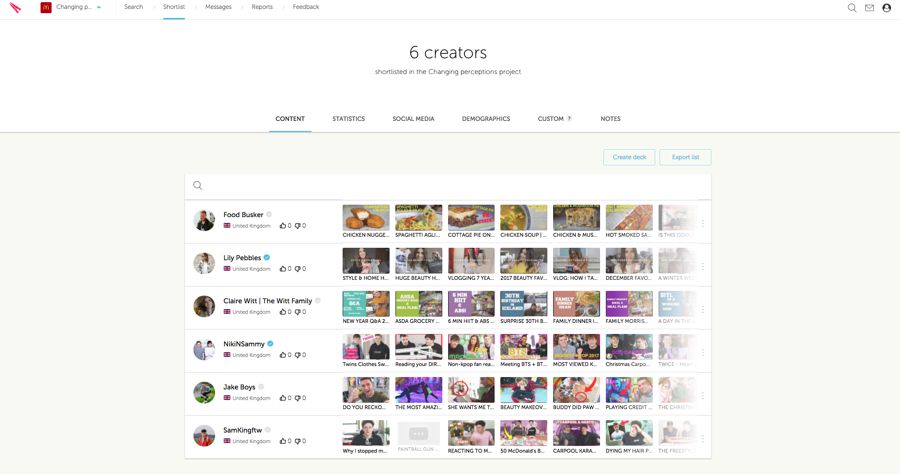 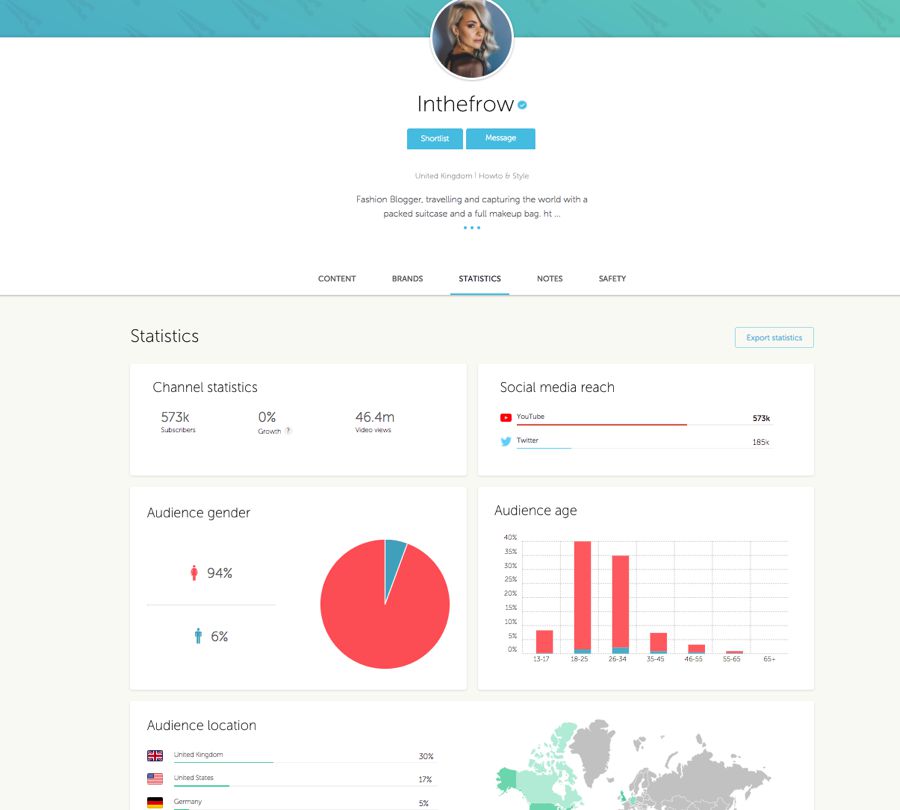 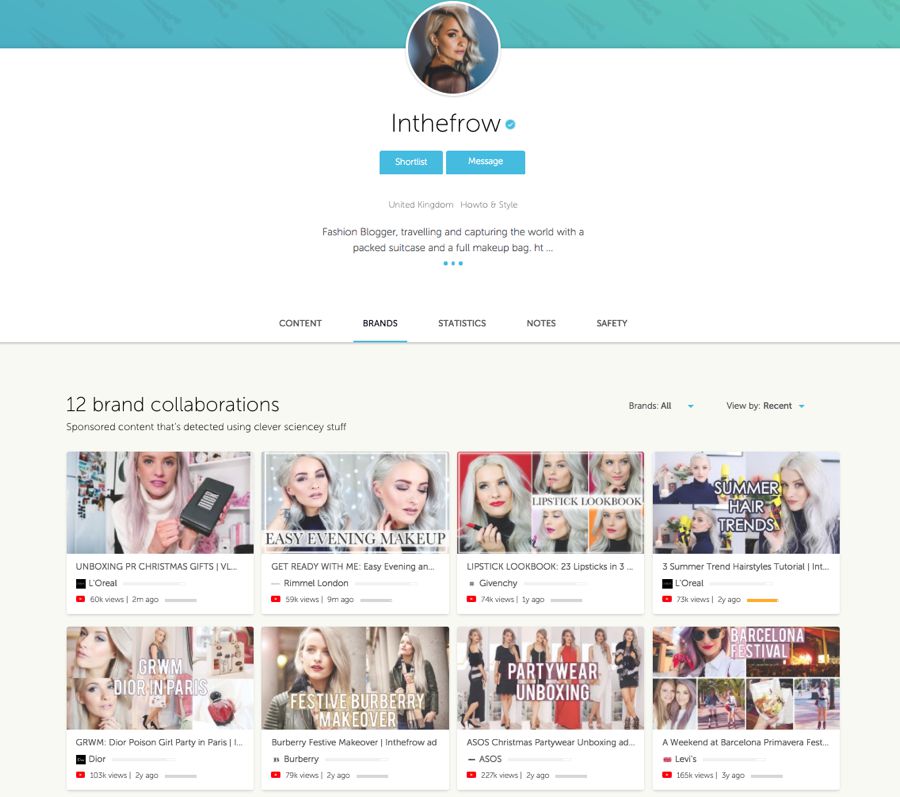 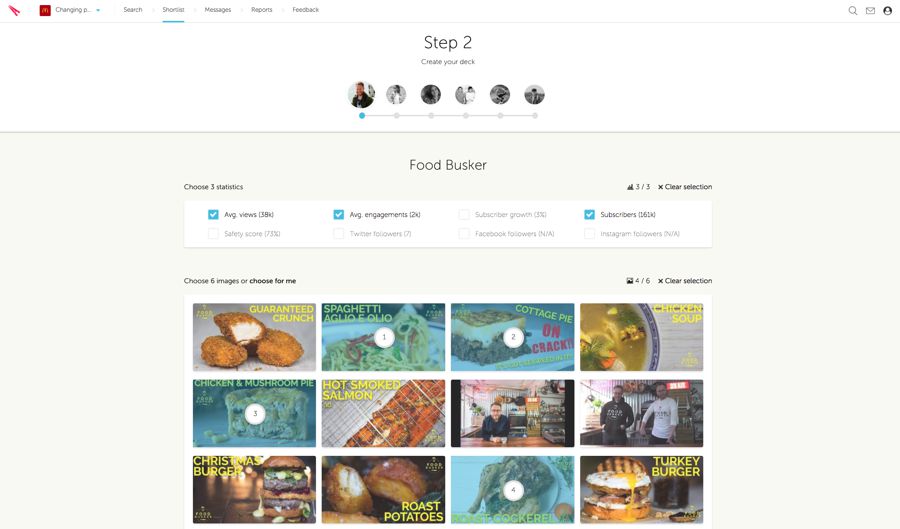