Takumi’s founding in early 2015 appears to have been a quiet affair, with no press releases or marketing to speak of. Instead, it appears the company’s four founders went right to work on building out the idea that brought them together. In an interview with alphr.com, co-founder Mat Stigzelius says it was his partner, co-founder Solberg Auðunssons, who noted the missed opportunity of micro-influencers (who were not yet known by that name) as brands spent money at the Kardashian level. Stigzelius, who came from a marketing background, had been running up against the same wall: the people with the smaller pool of followers had better engagement and loyalty, but managing enough of them to make a difference is a huge task. It was from this starting point that Takumi’s original idea sprung.
But the thing about having an original idea is someone else is bound to have the same one, somewhere else, without any cross-pollination. Example: the Middle East often gets the credit for modern agriculture, but the indigenous people of North and South America had well figured it out on their own, roughly around the same time. Such is the case with Takumi, a managed influencer marketing service that directly competes with indaHash, pretty much feature for feature. 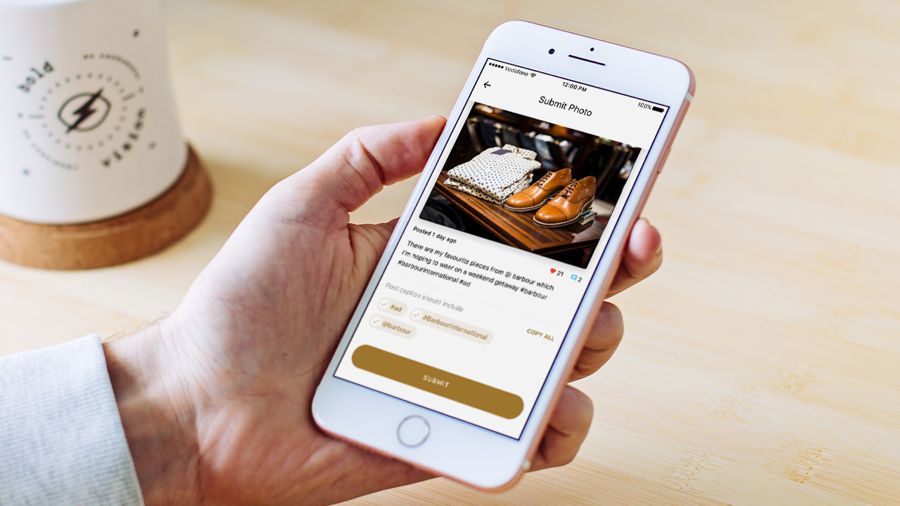 That’s not said as a put-down. What’s most remarkable about the similarities is the fact these two products were conceived and developed, simultaneously and independently, with their launches happening within a month of one another. Neither is biting from the other, is my point—these are independent creations that both address a similar question. Namely, how can you manage a small army of micro-influencers at a scale large enough to get a macro-reach? Surprisingly, both platforms answer the question in similar ways—with just a few key differences (which I’ll get into in The Details).
One similarity that’s definitely worth noting is the success both services are having with brands. But as this is Takumi’s review, I’ll just focus on theirs. And it’s impressive. Their customer list is over 300 brands and growing, with companies like Sony Music, Hilton, Proctor & Gamble, and the BBC. The service is currently available in the USA, UK, Ireland, Iceland, and Germany, a growth made possible by the $4 million dollars in additional funding they secured back in May. The owners see this niche space they’ve helped create getting flooded with imitators, and this second round of funding gives them what they need to put all the newbies in the rearview. Read on to find out how they’re going to do that.

Takumi
Not quite a marketplace and not quite a managed service, Takumi exists in the grey area between the two. Brands tell Takumi what they want at the beginning when creating a campaign brief, then approve or decline payments to influencers at the end.
Pros and Cons
Human team at Takumi vets influencer for the platform to ensure quality, aethstetic, and professionalism
Takumi staff is very hands on with campaigns, so brands can relax
Mobile app for influencers meets them where they’re at
No content review prior to influencer going live with a post
No audience insights in campaign reports
Best for: Small and Medium brands
Ratings
Features
3.5
Ease of Use
5.0
Reporting
3.5
Overall Score
4.0

Unlike self-service platforms, Takumi doesn’t have a monthly fee. Pricing is on a fee-per service model, with the service being Takumi’s management of brands’ Instagram influencer campaigns—matching the right creators according to brand requirements, curating user created content, scheduling posts, overseeing payments, and compiling the data. Each campaign is priced according to need—or, more accurately, created according to budget.

Like most marketplaces, Takumi is home to a database of thousands of influencers who’ve opted in to the platform. And while this opt-in process requires a certain amount of vetting for quality, those assessments are often based on an influencer’s basic stats—like followers and engagement rates—as well as identifying their niche. If there’s quality control over their content specifically, it’s usually around making sure there isn’t anything objectionable showing up in their feeds that might scare a brand off. This is where Takumi’s first key differentiator comes into play. 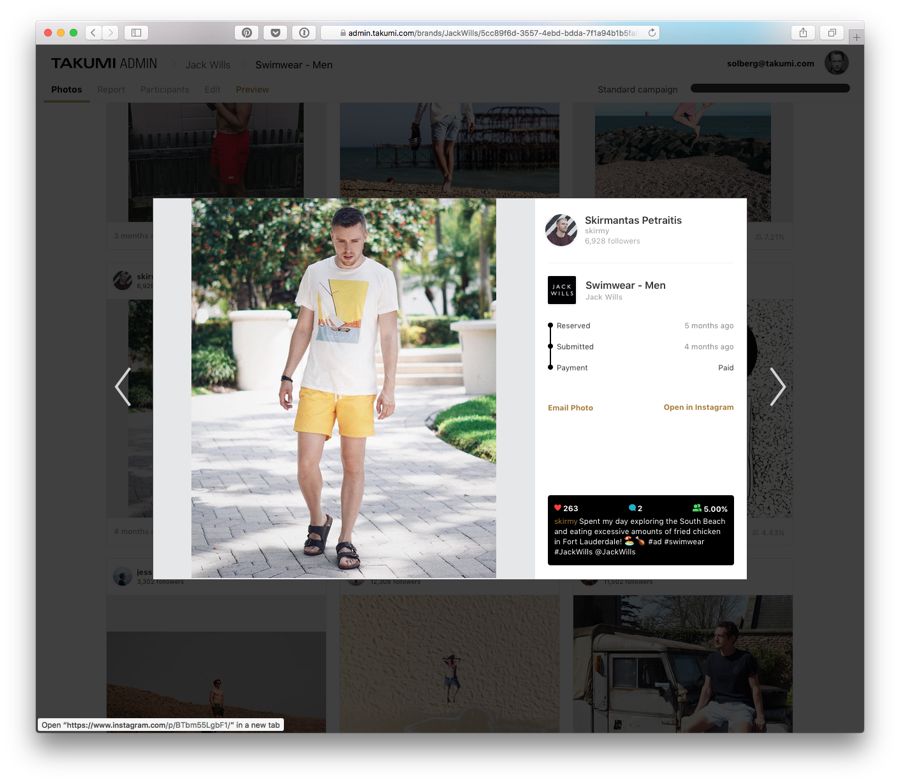 For one, their numbers-based vetting doesn’t just verify quantity. There’s a 1,000 follower minimum, but that’s not a golden ticket: the staff at Takumi will verify that their followers are real and active people. They’ll check an influencer’s hashtag use to make sure they’re not playing any follow-for-follow games. They reject accounts that show evidence of using follow- or engagement-boosting apps. And when they quality check the content, they’re looking for creative, well produced images. It’s not enough to have a large and rabid fanbase if a feed consists of selfies and fun times. Takumi’s looking for creators with style and a vision. You can see this in action right on Takumi’s website, where a collage of their creators’ posts all evoke some unified aesthetic. This attention to detail tempts me to classify Takumi less as a technology solution and more as a boutique ad agency. 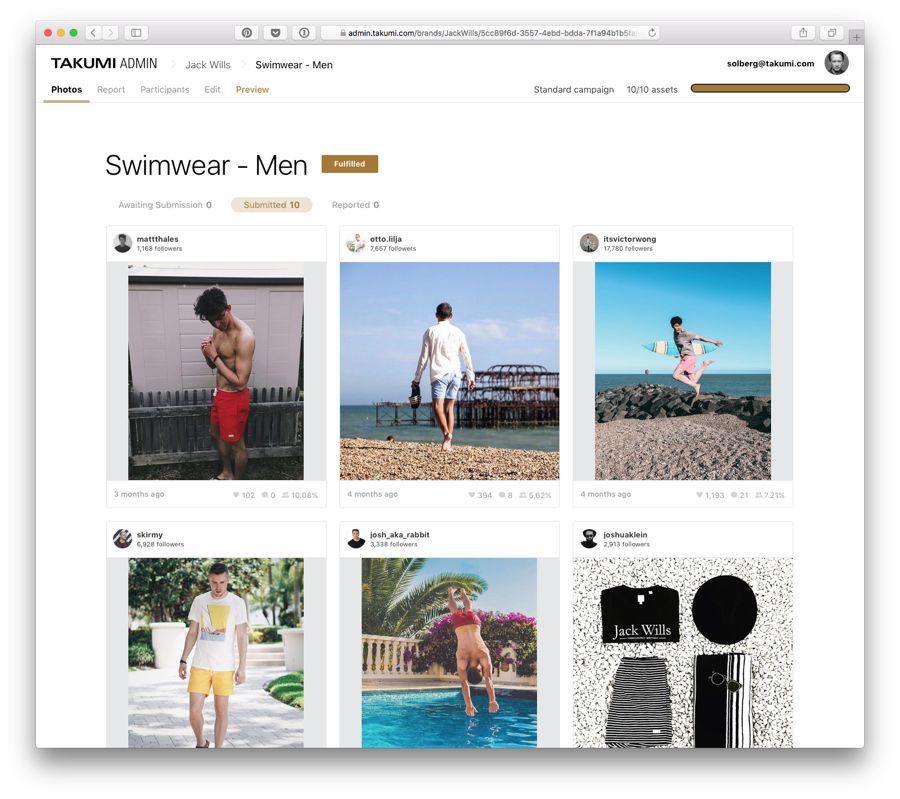 Make no mistake, though, there’s a lot of technology at the heart of Takumi. The extra trouble they go through before accepting a creator means that a lot of the process can be handed over to the platform itself. Think about it: Takumi checks each applicant for four criteria:

The first two criteria mean they’re worth compensating for their work. The second two mean you can trust them to do that work well, and without oversight. With this in mind, this is basically how a campaign goes with Takumi. 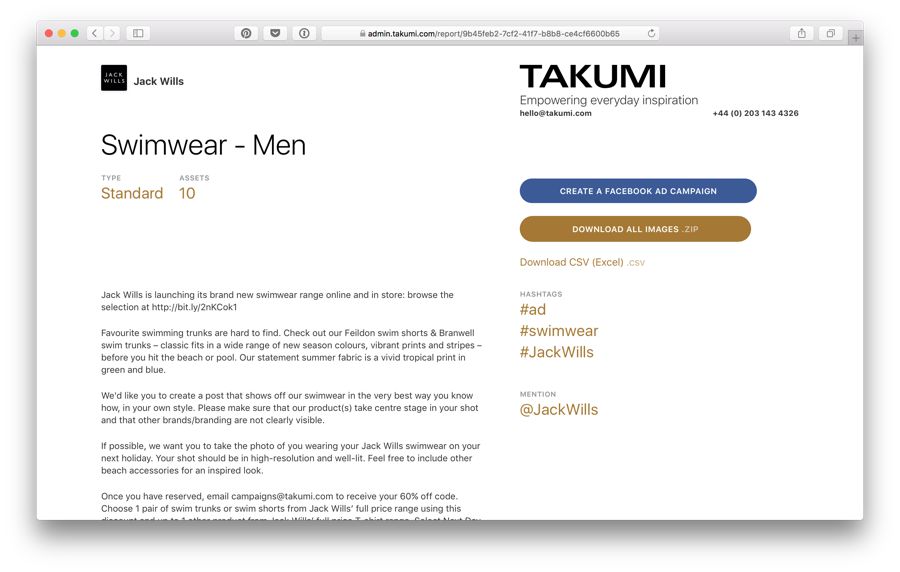 Brands work with Takumi to define their campaign: the objective, the theme of the images they want, influencer demographics, categories and topics, the timeline, and the budget. Once both sides have all the details worked out, the brand basically just sits back and waits to see the results. The algorithm underneath Takumi works to match the campaign to influencers who meet the criteria—influencers use a mobile app to access the platform and are notified when a new campaign launches that they’re eligible for. From the app, they can view the details and if they want to participate they reserve a spot. Once reserved, they get to work creating and posting the content according to the guidelines, without need for any intervention or review. Note that there is no one double checking the content before it goes live, but payments are never issued until a person has reviewed the post to ensure it meets the campaign guidelines.

While there is nothing for brands to do on the platform itself, as far as creating and managing the campaign goes, they do have access so that they can monitor the results as the posts and data start rolling in. It’s easy for them to navigate through the interface to see what’s been posted and what they’re waiting on, and they can sift through all the posts to see which the top performers are. Beyond the standard metrics, the campaign data that Takumi presents is pretty lean. There’s not much in the way of the audience data, which is a shame because of one other feature of Takumi. 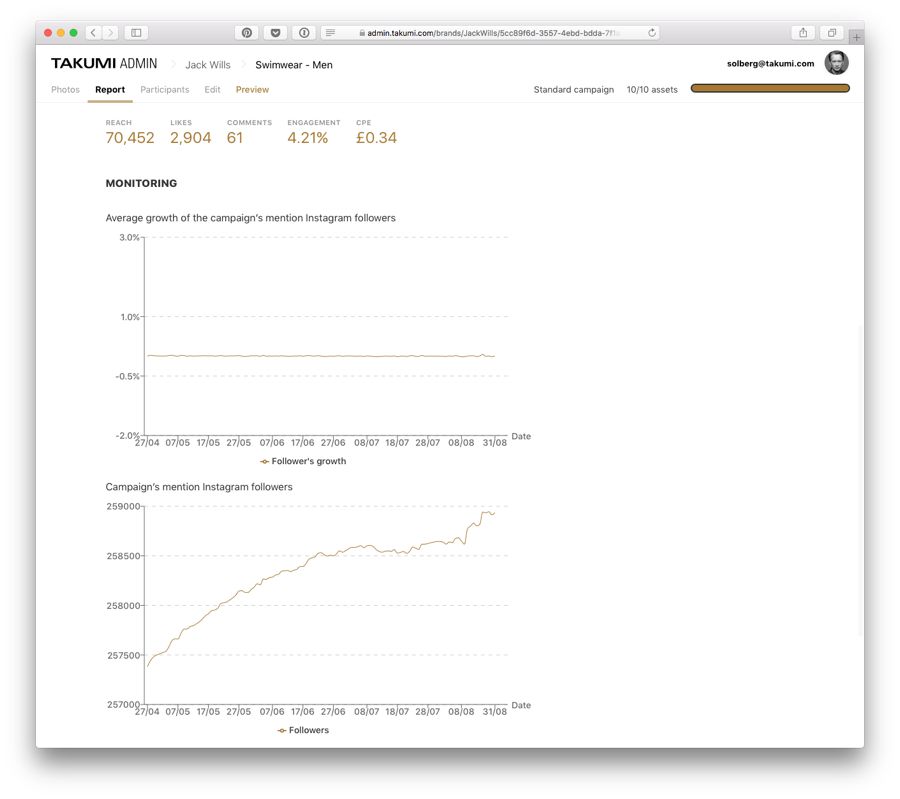 All the content generated as part of the campaign is owned by the brand, so every time they market on Takumi they end up growing their own library of stock photos for future marketing. In that sense, campaigns double as A/B tests for content—at the end you’ll know which posts got the most engagement and use those as the basis for, say, a Facebook ad. This is a great bonus for brands, but could be better if they had deeper demo- and psycho-graphics on the audiences that engaged on Instagram. With Facebook’s ability to hyper target ads to users, the more information out of Takumi means more effective spending on Facebook. But that’s a small deficiency in what is otherwise an impressive service.

That Takumi feels so fleshed out and complete as a service this early into its existence is good news, both for its customers and prospects. It’s also not a surprise. Remember, the idea behind it was to leverage micro-influencers, before most of the industry really understood there was value there. That shows an inherent understanding—as well as a natural curiosity—of the influencer marketing landscape. It only makes sense, then, the execution on the idea would show a similar thoughtfulness. And while Takumi arrived at the same time as its nearest competitor, with a nearly identical business model, that timing seems only to have served them. This review could just as easily have been solely about the service and the tech that powers it, and it still would have been a food review. But in comparing it to other offerings, Takumi’s strength comes into sharp relief. As I mentioned before, the service feels like it could just as easily be a boutique ad agency, with a focus on independent and creative talent driving brands’ marketing. The imitators will come soon enough, but Takumi’s already distinguished itself from them. And they did it with style, just like a marketing firm ought to.