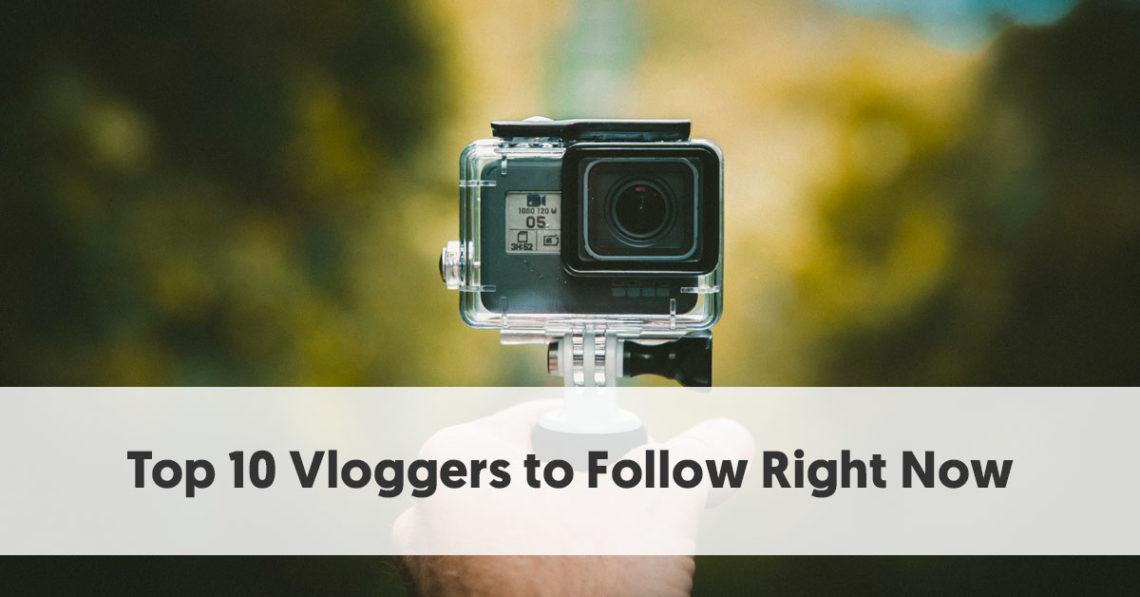 You might be wondering what a vlogger is. A vlogger is somebody who creates and uploads a video blog. You can look as a vlogger as being somebody who films his or her life rather than writing about it. Some vloggers make daily videos of their activities. Others make videos less frequently when they have something specific to say to their followers.

In practice, there is a fine line between a vlog and any other video channel. Many YouTube channels could be considered to be vlogs, despite not featuring “day in the life” videos. If a channel contains the same kinds of content that a blog would – but in a video format – you could consider it to be a vlog.

To confuse things, some famous YouTubers operate separate channels, which they consider their vlogging channel. Others just run a combined channel, which in reality contains short movies that you could consider vlog videos.

Over time, the term “vlogging” has widened to include video streaming on YouTube, Facebook, and the other live video networks.

Probably the key to vlogging is that it features predominantly self-made first-person videos – either live-streamed or pre-recorded and uploaded. Each video will usually feature the vlogger speaking directly into the camera, sharing his or her day, or thoughts on a particular subject.

Most of the vloggers we feature here make videos showing aspects of their lives.

Roman Atwood creates vlogs, depicting his life. In fact, he even has a couple of movie-length vlogs and plans to make more of these epics.

Roman began his YouTubing making prank videos, on what he now refers to as “my old dusty channel” – RomanAtwood. Although he hasn’t added new videos to that channel for two years, it still attracts 10.6 million subscribers.

He became a vlogger in 2013 and still enjoys creating his family-friendly, kid-friendly vlogs. He posts videos most days keeping his fans informed about how his life is progressing. As a former prankster, it should be no surprise that Roman’s vlogs are comical. His vlog channel is the 50th most subscribed channel on YouTube.

Roman can take pride in being only the second YouTuber to receive two Diamond Play Buttons for hosting two successful channels. He won the YouTube Comedian category of the Shorty Awards in 2016.

He announced last month (April 2018) that after 86 days of daily videos he was going to vary his video-making. He plans to produce less daily short vlogs, and instead film more weekly movie-length vlogs.

2. Dan is Not Interesting (Daniel Howell)

Daniel Howell initially made his videos as Danisnotonfire (and if you look closely you can see that is still part of his main channel’s URL). That channel is now simply named Daniel Howell. Dan is a British YouTuber who has been uploading his videos since 2009.

He operates a side channel, called Danisnotinteresting, where he uploads bonus footage from videos, along with videos intended to be vlogs.

He describes the videos he uploads as being about how awkward he is, and how people laugh at him.

While he probably wouldn't consider the bulk of his videos on his Daniel Howell channel  to be vlogs, he nonetheless is the star of most of them. Quite a few of them also feature his game-playing video partner, (Amazing) Phil Lester. The pair together run a gaming channel, DanAndPhilGAMES, which has been officially recognized as YouTube’s fastest growing channel.

Dan studied law at the University of Manchester in 2010, but dropped out a year later, deciding he lacked interest in law. Instead, he changed his career to radio broadcasting and professional vlogging.

Amazing Phil is known as Phil Lester in the real world. Like his frequent collaborator, Daniel Howell, Phil is an English YouTuber and former radio personality.

Phil sums up his vlogging activities in the About section of his AmazingPhil channel – “I share my strange life with the internet! Subscribe to see what happens next.”

Phil’s fans love him because they consider him sweet, looking at life in a lighthearted and positive way. They believe he can cheer them up when they are down or feel depressed. They particularly love the verbal sparring between Phil and Dan when they combine to make videos.

PointlessBlogVlogs is one of three YouTube channels that English YouTuber, property investor, and author, Alfie Deyes, operates. The others are his original PointlessBlog and PointlessBlogGames.

Alfie releases new vlogs three or four times per week. They cover topics such as Big Family Summer BBQ, Having Another Dog for the Day, and The Babies Have Arrived (these are actually baby dolls you can use to learn how to cope when real babies come along).

While Tyler Oakley doesn’t refer to his videos as vlogs, many of them fit the criteria. He does have one popular section, called Day in the Life videos, for those who prefer the strict vlogger definition.

Tyler releases a couple of videos each week, covering topics ranging from product reviews to returning to his college (and a 10-year high school reunion) to a video on how he lost his virginity (also, coincidentally a 10-year reunion). Since then he says he has had a “decade of debauchery.”

Many of his videos focus on looking at life from a gay perspective, with the aim of helping LGBT youth. His videos cover social issues like health care, education, and suicide prevention.

Casey Neistat is an American YouTuber, filmmaker, vlogger, and founder of creative space, 368. He operates a highly popular YouTube channel that features a variety of different video types. But some of his most popular videos are his vlogs.

He has a section within his channel called Vlog, which contains 490 videos, predominantly from 2015-2016. Yet, while Casey no longer appears to upload new videos to this section, many of his other videos meet the criteria to be considered vlogs.

Casey makes the bulk of the videos himself and appears in many of them. They tend to be short day-in-the-life videos, albeit a somewhat unusual atypical life (like snowboarding being towed behind a 4WD through New York on a winter’s day).

One of his most inspirational videos is the story of his life - Draw My Life - Casey Neistat. In it, he shows how he has moved on from teen dad and high school dropout living in a caravan park to a successful video maker.

Jon Olsson is a professional freeskier and car fanatic who shares his life in a daily vlog.

Jon was born in Mora, Sweden. He built a passion for skiing at an early age. As a child he was into racing, but changed to freestyle skiing at age 16. He became cominat at the sport, even inventing his own double flips.

Jon snow lives in Monaco, and his passion for freeskiing remains strong. He has expanded his love of moving fast on the snow to moving fast on the road. He owns and drives multiple Audis, including a customized RS6. He has even designed a super car, the Rebellion R2K, and he drives it n the Gumball 3000 each year.

According to the Vlog Brothers’ About page, the purpose of their channel is to raise nerdy to the power of awesome.

The channel was created and is hosted by the Green brothers – John Green and Hank Green. The brothers have regularly posted videos to it since 2007.

John and Hank initially collaborated on what they called the Brotherhood 2.0 project in 2007.  The idea behind this was that the brothers cease all text-based communication for a year. Instead, they would communicate in a daily vlog.

While Brotherhood 2.0 only lasted for the 2007 calendar year, the brothers found vlogging so rewarding and successful that they wanted to continue. They began by setting up a website for their community called Nerdfighters.

They have been prolific posters to their Vlog Brothers channel. Hank Green made a video in September 2012, celebrating their 1000th video.  There have slowed their output since, but Vlog Brothers now have 1,606 videos currently uploaded.

Superwomanvlogs is the video diary of Lilly Singh, whose motto appears to be “hustle harder every day”.

Lily is a Canadian YouTube personality, vlogger, author, and actress. Her main channel is IISuperwomanII where she rapidly grew to receiving over 2 billion views, and that channel quickly accumulated over 13 million subscribers. In 2011 she added created her Superwomanvlogs channel to give her a place to showcase her daily activities. She began uploading daily vlogs in August 2014, and that channel’s popularity has also grown.

Lily has enjoyed recognition for her YouTube activities. She has received an MTV Fandom Award, four Streamy Awards, two Teen Choice Awards and a People's Choice Award to date.

She explains the “Superwoman”  part of her name as being due to a childhood idea that she had an invisible "S" on her chest, making her believe she can do anything.

Louis Cole makes a daily vlog depicting his life as he travels the world. His videos show the new friends he makes, as well as the opportunities he finds for fun and to inspire others.

Louis is an English film-maker who has a passion for documenting his traveling. He encourages his viewers to "Peace out, enjoy life and live the adventure."

He posted his first daily vlog on 31 December 2012 and has been making daily videos ever since. He has now uploaded over 1,500 videos.