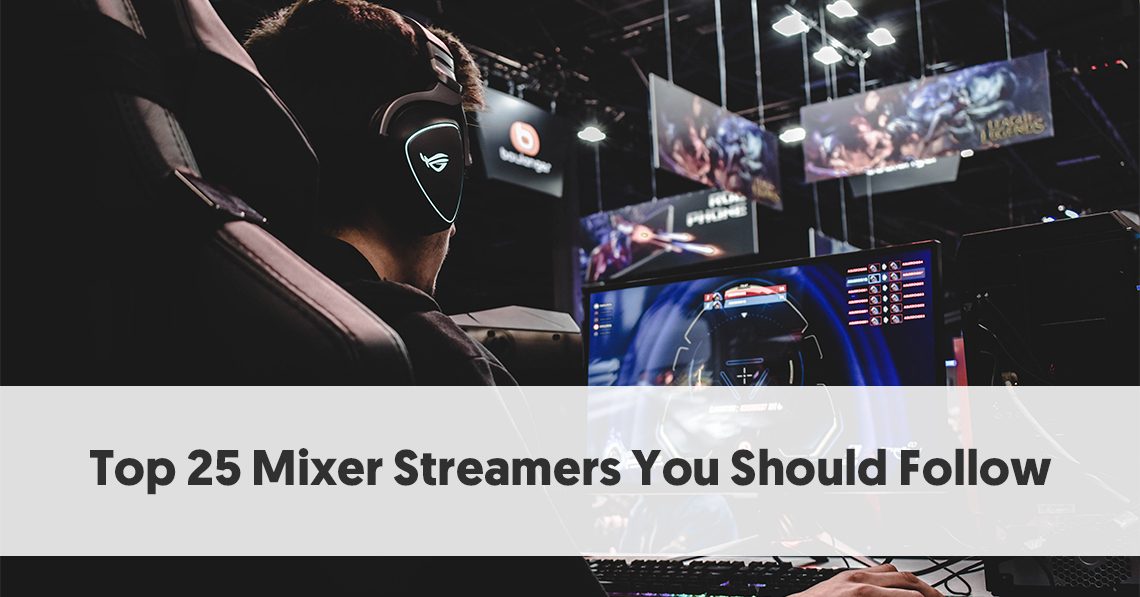 Mixer is a video streaming service from Microsoft with native streaming support from other Microsoft products like Windows 10 PCs and Xbox. The platform recently started getting in the spotlight ever since Ninja, the top Twitch streamer, joined. Although its worldwide fame may be newfound, Mixer already has an established user base comprising of gaming and tech streamers. 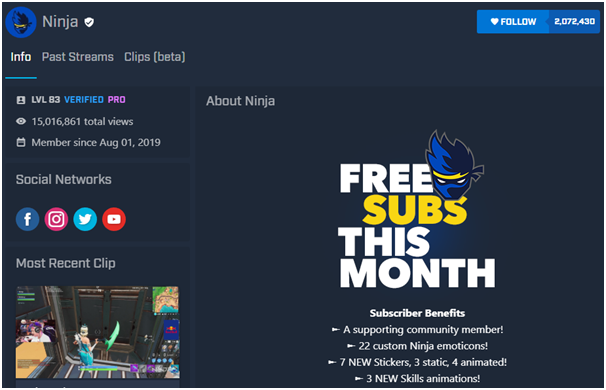 Due to his loyal following, Ninja has already commanded over 2 million followers on the platform although he only joined in August 2019. His streams have received more than 15 million views. True to his niche, Ninja’s Mixer streams are all related to gaming. He even broadcasts some of his streams from popular events like Lollapalooza and venues like Red Bull Studios. 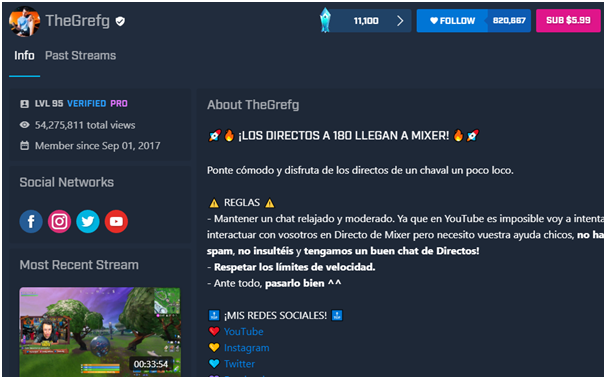 David Cánovas is a Spanish gamer who is extremely well-known in the Fortnite community. The 22-year-old first gained popularity through YouTube, where he publishes entertaining, gaming-related videos and has gained 11 million subscribers. His Mixer following has gradually grown as well since he joined the platform in 2017. His streams have garnered over 54 million views. 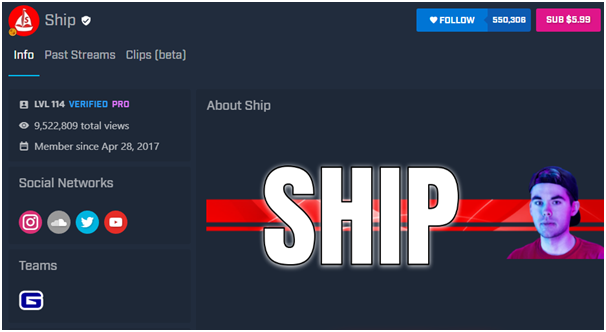 Ship, whose real name is Steve is a 21-year-old gamer from New York and specialises in Fortnite. He has been on the platform since 2017 and is an original member of the Beam community. He has been streaming full time since March 2018. Ship has managed to gain over 9.5 million total views for his streams. In addition to being a Mixer partner, he has partnerships with top brands like Streamlabs, G Fuel, Maxnomic, and Scuf Gaming. 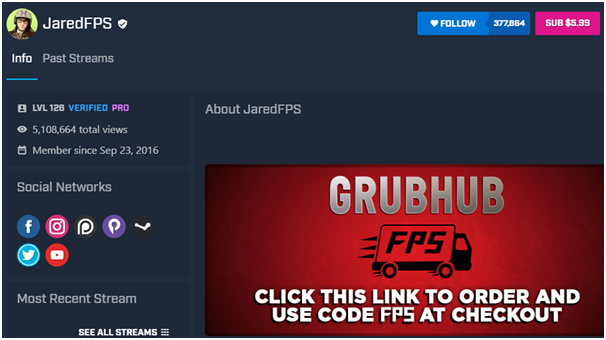 Like many other gamers on the list, JaredFPS is another streamer with a main focus on Fortnite. Since he joined the platform in 2016, he has gained over 300,000 followers and 5 million total views for his streams. JaredFPS has a ton of partnerships with gaming and non-gaming brands alike. This includes Grubhub, Gunnar, G Fuel, and DXRacer. He is the founder of Team Passion. 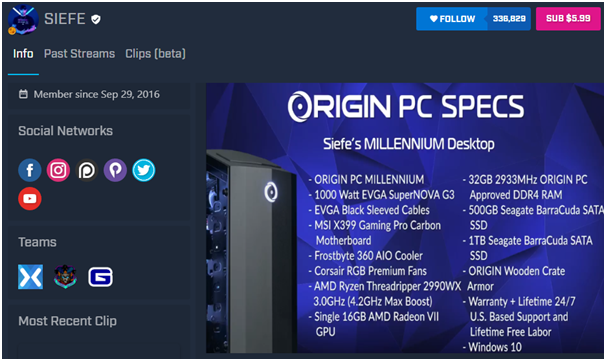 Siefe is a veteran in the gaming industry – from being a consultant on several eSports titles to becoming a full-time streamer on Mixer. He is also an original member of the Beam community. Most of his content is related to Call of Duty and Apex Legends, and he has received over 5 million views for his streams. Siefe has partnerships with notable brands like ORIGIN PC, G Fuel, and Turtle Beach. 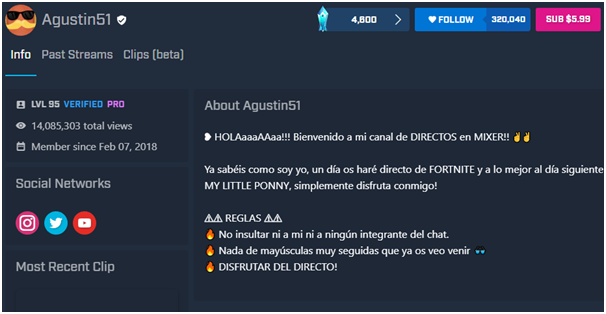 Octavio Agustín, also known as Agustin51 is a Spanish gamer who gained popularity from playthroughs, gaming montages, and commentary on YouTube. The Fortnite expert currently has over 3.6 million subscribers on the platform. The gamer joined Mixer in 2018 and has since gained over 320,000 followers and 14 million views for his streams. 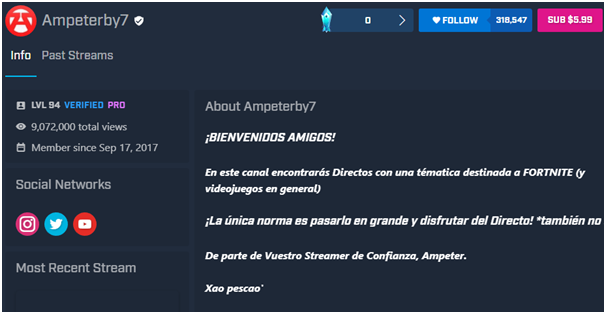 Another Spanish streamer on the list, Ampeterby7 is a 20-year-old gamer with over 318,000 followers and 9 million views on Mixer. He is best known for his comedic gameplay commentary and achieved worldwide fame through YouTube, where he has 4 million subscribers. While most of his Mixer content focuses on Fortnite, he is also an avid Call of Duty player. 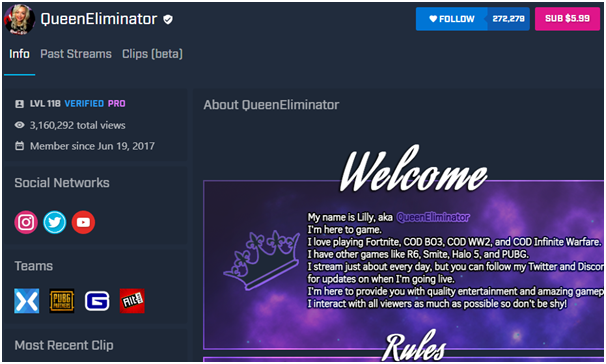 Lily, also known as QueenEliminator, is the top female gamer on Mixer. She mostly broadcasts gameplays on a wide variety of games including Fortnite, Call of Duty, Apex Legends, and GTA. Among all the gamers on this list, her streams have the most varied mix of games. She has gained over 3 million views for her streams and her brand partners include Gunnar, Meta Threads, and Techni Sport. 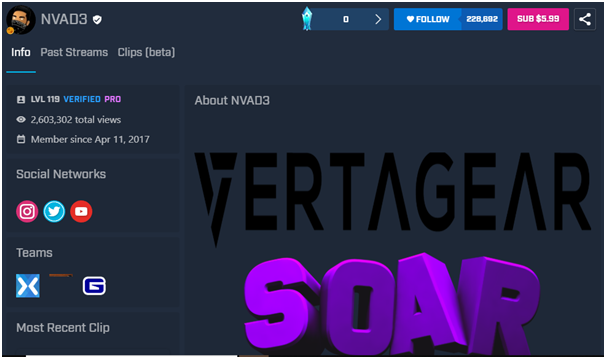 Allan Shofner, better known as Nvad3 has been a Mixer streamer since 2017 and is a part of the original Beam community. He has gained over 228,000 followers on the platform and 2.6 million total views for his streams. In addition to the occasional Fortnite streams, this gamer mostly streams NBA 2K19 gameplays. Besides being a Mixer partner, Nvad3 has partnerships with brands like Corsair and Elgato. 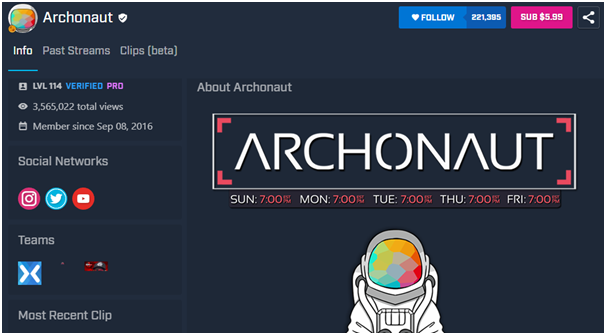 Archonaut is an extremely charismatic streamer and has earned over 30 million Sparks on Mixer. He has built up a following of over 221,000 since he joined the platform in 2016 and is also an original member of the Beam community. His streams have had more than 3.5 million views in total. He streams games like World of Warcraft and PUBG. Archonaut also commands a significant following on Twitter, where he has over 12.4k followers. 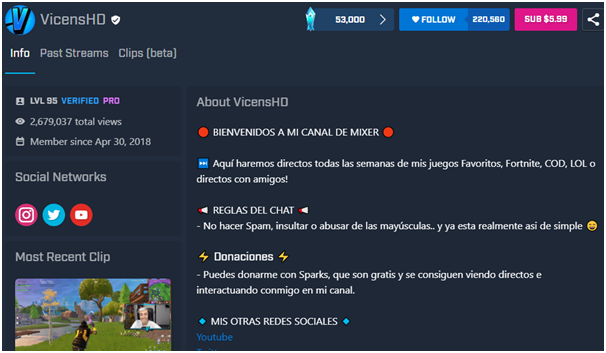 VicensHD, also known as Código Viceens is a gamer who gained popularity through his comedy gameplay commentary on YouTube, where he has a million subscribers. The gamer has managed to build his following no matter which platform he joins and has gained 220,000+ Mixer followers since joining in 2018. He mostly streams Fortnite gameplays along with the occasional League of Legends and Call of Duty gameplays. 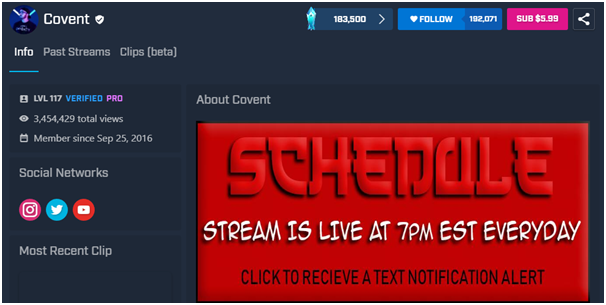 Chris Covent, who goes by the tag, Covent is a veteran gamer and has been on Mixer since the year of its launch. He has gained a following of over 192,000 and 3.4 million total views for his streams. Most of his content is related to Apex Legends, although he streams the occasional Call of Duty and Halo 5 gameplay. 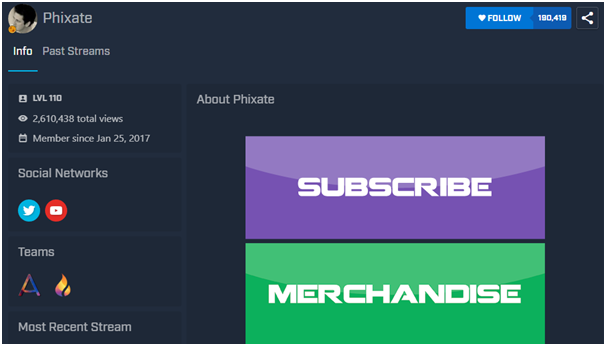 Phixate is another popular Fortnite player with over 190,000 followers on Mixer. He is also an original member of the Beam community. His streams have gained 2.6 million views in total, with viewers tuning in to watch his Battefield V and Black Ops 3 gameplays aside from Fortnite. He is part of Mixer teams like Team Passion and Team Atlas. 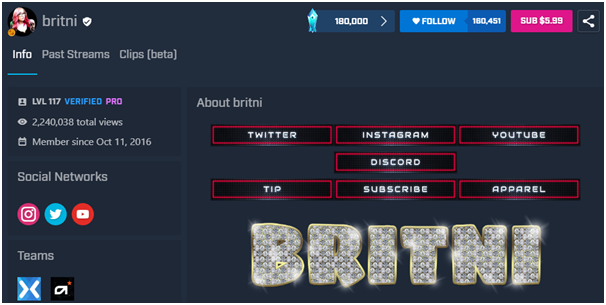 Another leading female gamer, Britni has been on the Mixer platform since 2016 and is an original member of the Beam community. She has gained well over 160,000 followers and 2.2 million views for her streams. She regularly streams gameplays for Apex Legends, PUBG, Overwatch, and Battlefield V. Britni has also made a few broadcasts with her boyfriend, Covent, who is number 12 on our list.

Will Kowach, popularly known as Kabby, is a former U.S Marine and game artist. He worked on titles like FEAR and Killer Instinct. He joined Mixer in 2017 and has since built up a following of over 156,000. Kabby regularly streams gameplays for World of Warcraft, PUBG, and No Man’s Sky, which have garnered 4.6 million views in total. 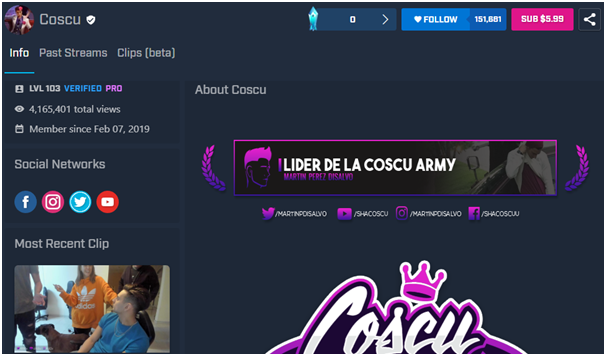 Martin “Coscu” Pérez Disalvo is an Argentine gamer who originally gained popularity through YouTube, where he has 1.9 million subscribers. He is the leader and founder of the Coscu Army – an Argentine gaming club. Most of his Mixer streams are related to League of Legends and IRL, and he has received 4.1 million views for them. 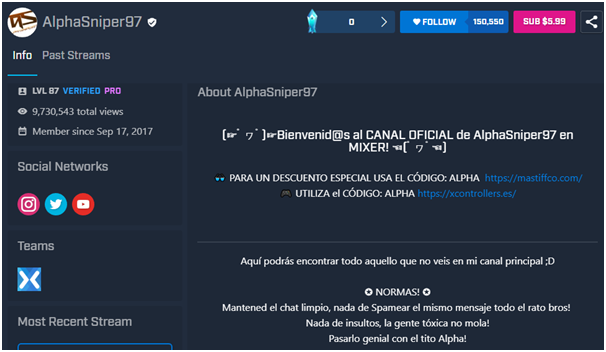 David Díaz, more popularly known as AlphaSniper97, is a 22-year-old gamer from Spain with a focus on Fortnite and GTA. He built his influence through YouTube, where he has 4.4 million subscribers and creates videos on gaming commentary, comedy sketches, and more. He is a highly entertaining streamer and has gained over 9.7 million views for his streams. 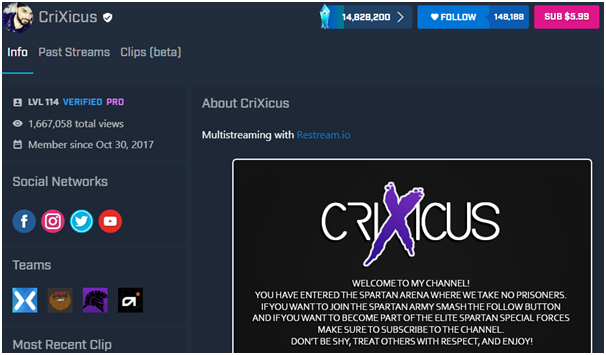 Popularly known by his tag CriXicus, Codie Crix is another popular Fortnite streamer. He also streams gameplays for GTA V and Minecraft. Since he joined the Mixer platform in 2017, CriXicus has gained over 1.6 million views for his streams. The gamer has sponsorships from notable brands like ASTRO Gaming, DXRacer, and Gunnar. 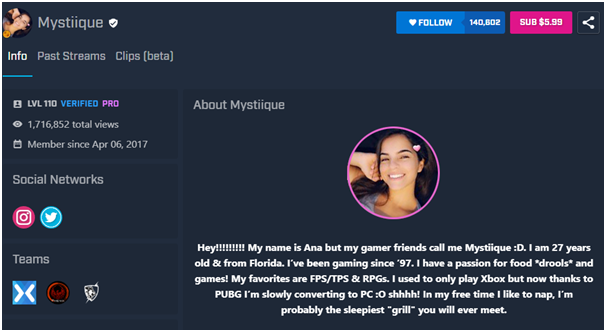 Mystiique is one of the most popular female streamers on Mixer with over 140,000 followers and is an original member of the Beam community. Her charisma and skill attract a ton of viewers to her streams. In addition to 1.7 million total views, she has earned over 19 million Sparks. Mystiique regularly streams games like Fortnite, PUBG, and Apex Legends with a few game variations every now and then.

This Fortnite player is quickly gaining popularity and has amassed over 134,000 Mixer followers although he only joined in March, 2018. His streams have a collective view of 1.2 million, with most of them being Fortnite gameplay. Qwerdy also streams the occasional Apex Legends gameplay. He belongs to Mixer teams like Team Passion and GO Team. 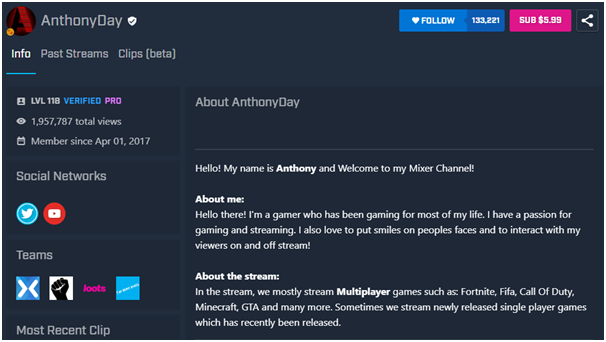 Anthony is a lifelong gamer from England, who joined the Mixer platform in 2017 and is an original member of the Beam community. Most of his streams are multiplayer games like Fortnite, FIFA, GTA, Call of Duty, and Minecraft. He also streams the occasional single-player game when there’s a new release. Anthony has gained over 1.9 million views in total for his streams. 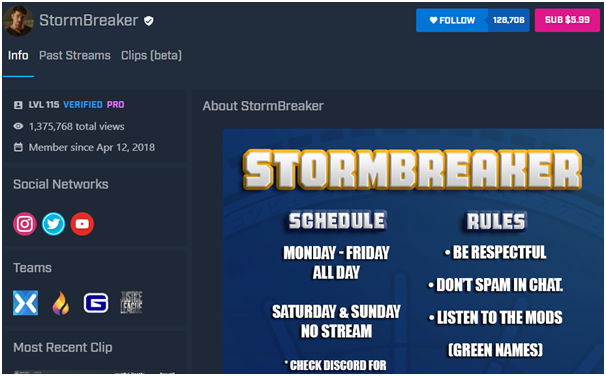 Since he joined Mixer in 2018, StormBreaker has gained over 128,000 followers, which is proof of the gamer’s ability to entertain his audience. He is a member of Team Passion and regularly streams games like Fortnite, Minecraft, and World of Warcraft. StormBreaker has received over 1.3 million views for his streams. His partner brands include Vertagear, Meta Threads, and GawkBox. 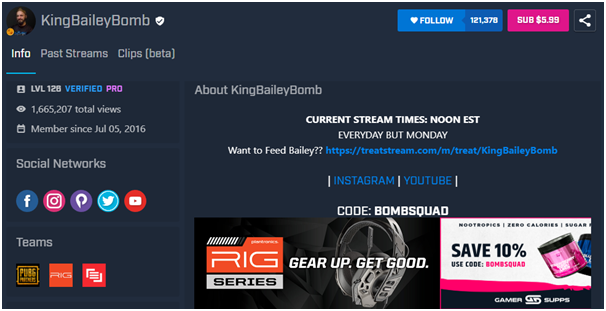 KingBaileyBomb is one of the best streamers on Mixer and is an original member of the Beam community before its transition to Mixer. He has amassed over 121,000 followers on the platform and has received sponsorships from PUBG, RIG Gaming, and MAINGEAR. Besides PUBG, he also streams games like IRL and Minecraft and has gained over 1.6 million views for them.

Another Spanish gamer to grace our list, bytarifa is a 20-year-old who commands a respectable following on every social platform. In addition to his 120,000+ following on Mixer, he has 4.9 million YouTube subscribers, 1.8 million Instagram followers, and 727.4k Twitter followers. He specialises in games like Clash of Clans and Clash Royale. 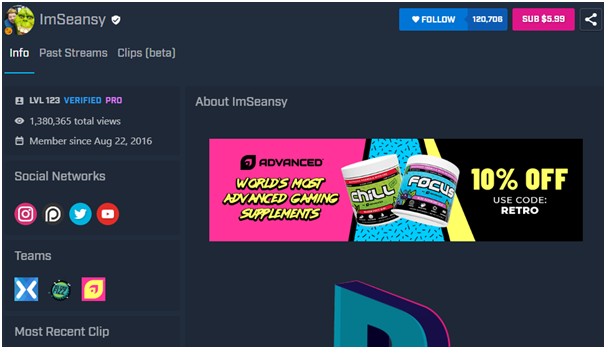 Sean, better known as ImSeansy, is the founder of Retro Fizz – a gaming and nerd culture brand. He is an original member of the Beam community and has been on Mixer since its early days, gaining over 120,000 followers since. He streams games like Blair Witch, Call of Duty, Dead by Daylight, Fortnite, and Apex Legends. ImSeansy has managed to earn over 1.3 million views for his streams.

These are the top streamers on Mixer who have managed to attract significant following on the platform and other social media channels. While most of them are dedicated to Fortnite, some of them stream a wide variety of games including Call of Duty, GTA, Apex Legends, and Minecraft. If you’re new to the platform, consider checking them out and see if you like their content.

As the internet has developed, ordinary people have had a more significant opportunity to... 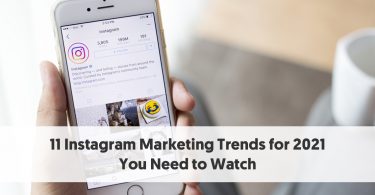 If you want to get the most from your Instagram marketing strategy in 2021, you've come... 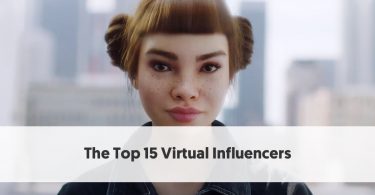 If you are still trying to figure out what a virtual influencer is, you are forgiven...