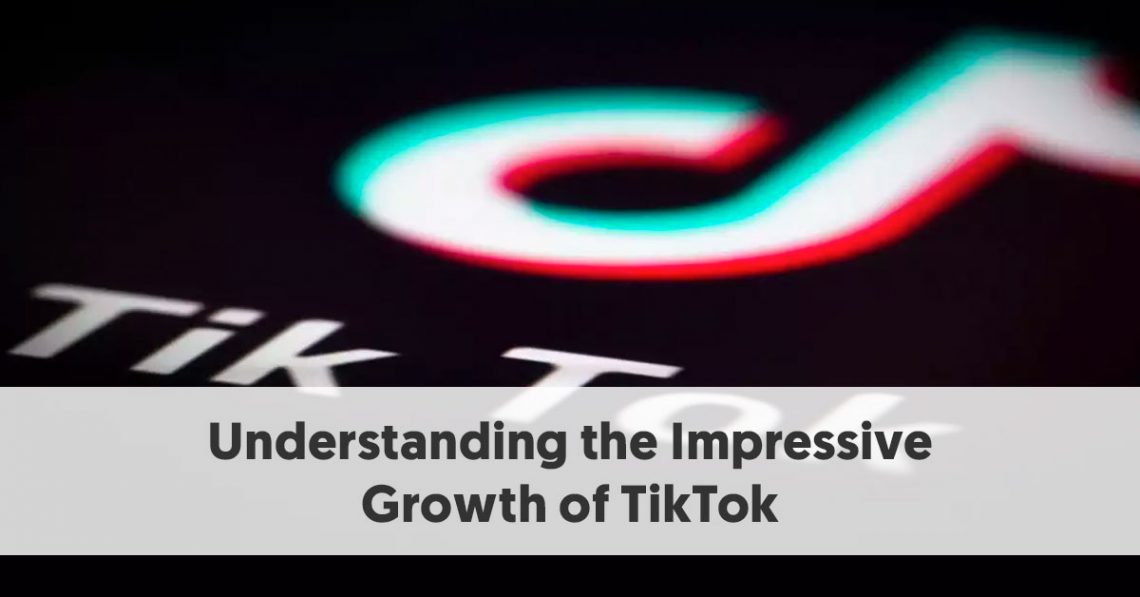 For years, the battle between social media platforms was between major platforms like Facebook, Instagram, and Twitter. But now, there’s a new app that’s been rising through the ranks over the past couple of years. TikTok, also known as Douyin, has experienced a massive growth in their user base since its launch in 2016.

In this post, we’re going to take a closer look at the short-form video app to understand its extensive growth.

Understanding the Impressive Growth of TikTok:

Before we get into its user growth data, let’s first look at the app and its background to better understand just how impressive the numbers are. TikTok was originally launched in China as A.me back in 2016. The name was then changed to Douyin shortly after its launch. Within just one year of launching, the app already had 100 million users and 1 billion daily video views.

It was then rebranded as TikTok to appeal to the international market when the app was introduced to other countries in September 2017. The company behind the app is ByteDance, a rapidly growing internet technology company that has been making waves with bold acquisitions. According to some reports, they even tried to acquire Reddit in 2016 but were eventually rebuffed.

In December 2017, ByteDance acquired the already famous Musical.ly video app for a little less than 1 billion USD. The company then started moving Musical.ly users to a revamped version of TikTok to completely merge the two apps the following year. That’s when the app began to really have an impact among an international audience, which brings us to the main topic of this post.

By 2018, TikTok already had over 660 million downloads worldwide, according to a SensorTower analysis. This is impressive because it didn’t even get 130 million downloads the previous year. So there was a 416% increase in total downloads within just one year. It managed to become the fourth most downloaded app worldwide after WhatsApp, Messenger, and Facebook. 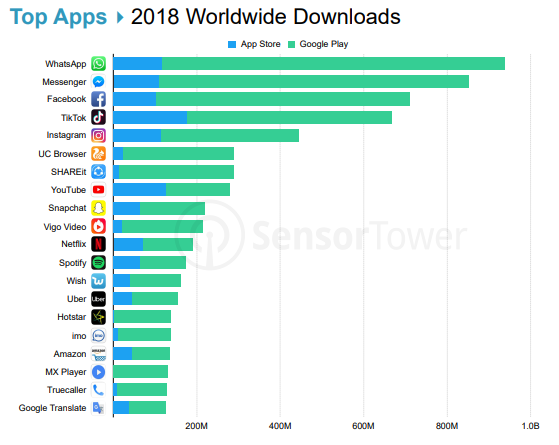 It also ranked No. 1 in the App Store in terms of worldwide downloads during Q4 of 2018. During the same quarter, it became the second most downloaded app in the U.S, right after it merged with Musical.ly. There was a 70% increase in U.S. downloads just between Q3 and Q4, with more than 9 million downloads in the final quarter.

TikTok quickly shot up in the charts in the top three mobile markets – China, India, and the U.S. In China, it became the most downloaded app for the entire year. In India, it was the third most downloaded app that year, after WhatsApp and Facebook. It also made it to the top 10 chart in U.S. app downloads. 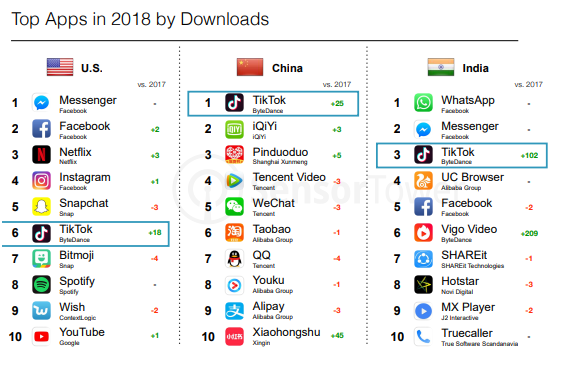 But the country that mainly contributed to the app’s huge success is India. In Q4 of 2018, there were more than 80 million downloads in the country, a year-over-year increase of 2557%. Monthly installs in the U.S. also increased by over 100% since it merged with Musical.ly. 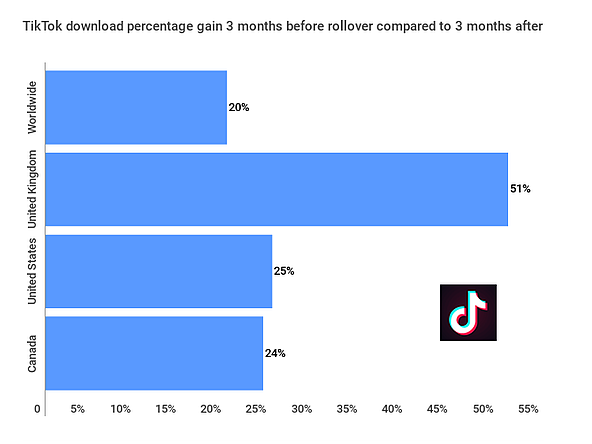 By July 2018, TikTok managed to hit 500 million monthly active users worldwide. And we’ll probably see further growth in this number because the app has seen a lot more new downloads since. In December 2018 alone, it gained 75 million new users across Google Play and the the App Store. This signified a 275% increase year over year since it only had 20 million users in December 2017.

TikTok continued to gain new users even in the following months and had 71.3 million new users in January 2019. It finally hit the one billion mark in total installs across Google Play and the App Store the following month. India contributed to 25% of these downloads, with an estimated of 250 million total downloads in the country.

These are impressive numbers, especially since the app has only been around for 3 years and achieved international popularity for about a year. Based on this rapid ascent, you can expect to see TikTok quickly surpass some of the top social media apps if all goes well.

While Facebook may be hard to compete with, these numbers suggest that TikTok may not have such a hard time with that. So in the following points, we will take a closer look at how the app compares against other top social media apps.

How TikTok Compares to Other Social Media Apps

Even though it’s a fairly new app, TikTok has rapidly climbed up in the charts and become a close competitor for some of the most popular social media apps. It has already surpassed Twitter, LinkedIn, Snapchat, and Pinterest. 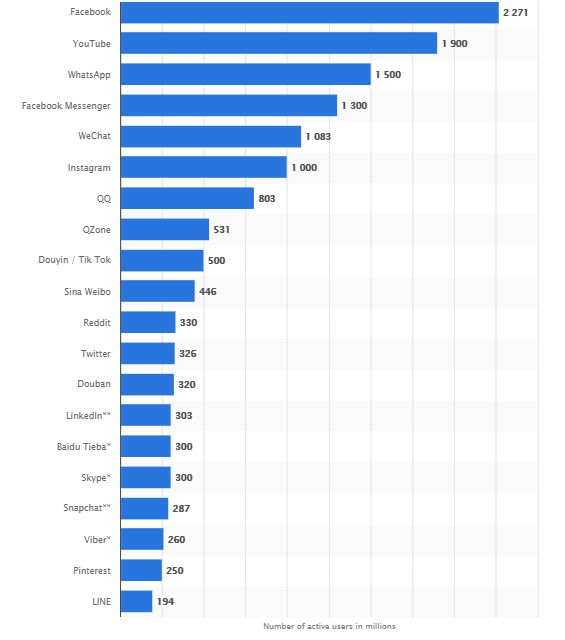 As you can see, TikTok is in the number 9 position on this chart. This may seem like a much lower ranking than expected but it’s quite impressive considering the app is just 3 years old. Plus, the rank is likely to change shortly since the app has seen a lot more new downloads this year.

Although it hasn’t yet surpassed Instagram in terms of active users, it received a lot more downloads during 2018 so the gap might close very soon. While Instagram had 444 million new downloads, TikTok received 663 million – a difference of over 200 million.

The only apps that surpassed TikTok in terms of total new downloads in 2018 were WhatsApp, Messenger, and Facebook. This isn’t too surprising since Facebook and WhatsApp are among the top three biggest social media platforms. So it will take some time before TikTok can become a close contender to the two apps.

What’s great about TikTok’s performance is that it isn’t just getting new users and downloads but also retaining them really well. According to the Apptopia analysis cited earlier, TikTok has an average user retention rate of 10% in the U.S. This is far better than Snapchat’s 8% retention rate. It’s even more impressive considering how the average retention rate in the Social category is 4%. 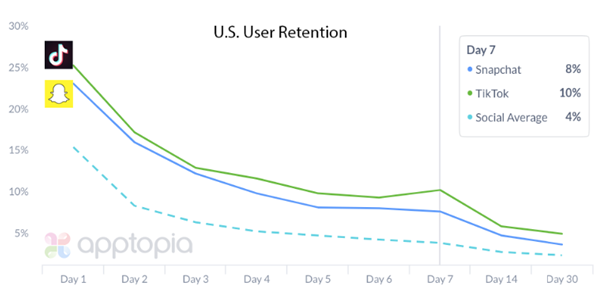 In terms of the Google Play store rank and usage rank, TikTok currently stands at number 4 in the U.S. and the U.K. as of writing this post. As usual, Facebook, Instagram, and Snapchat dominate the top three positions. But these apps have been around much longer than TikTok so it has made great strides by coming fourth in ranking.

While TikTok has made quick and significant progress in terms of user count and download rate, it still lags behind when it comes to revenue generation. This is to be expected since it’s a fairly new app compared to the top social media channels.

Being the top social media platform, Facebook generated more than £43 billion in annual revenue in 2018. Instagram made around £6.4 billion the same year, while Snapchat made around £888 million.

TikTok, on the other hand, has grossed about £58 million through in-app purchases. While this number may seem low compared to the revenue of top social media platforms, it’s important to consider how the app is generating money.

It mainly generates revenue through the coins that users purchase with real money on the app. Users can use these coins to send gifts to other users during their live streams. Plus, the spending has increased significantly between 2017 and 2018. There was an average increase of about 275% year over year.

The Controversial Ban and Its Impact on TikTok’s Growth

Recently, the Indian government decided to ban TikTok in the country. This is likely to hinder the app’s growth because as discussed earlier, Indian users make up a huge portion of the app’s user base.

ByteDance even stated that the ban is costing them 500,000 USD (£386,000) daily and putting more than 250 jobs at risk. So although the app had seen rapid growth in 2018, it might suffer some drops in global user count and download rate as a result of this ban. And its overall growth might get stifled for a bit unless the ban is lifted.

TikTok may be the new kid on the block but it has certainly made waves in the social media landscape. It has experienced significant growth in terms of download rate, user count, and app store ranking. If everything goes well and the ban in India is lifted, the app should continue to see gradual growth in the coming years.

Twitch came into its own earlier in 2020 when people were forced to while away their time...

Influencer marketing is one of the few online business practices that have thrived...

Just about a month ago, and to much fanfare, Viral Nation launched its own influencer...