How often have you looked at a successful YouTube channel and marveled at the massive number of subscribers it enjoys? And in the case of most of the large, well-known channels, this is well deserved. Most of these channels have spent years building their following and producing many high-quality videos.  But in a few cases, the plaudits aren’t well deserved. Some YouTube channels have made their fame around fake YouTube subscribers.

If you are hoping to work with a channel for marketing purposes, you want genuine viewers. This is just as true for channels you contract directly for influencer marketing as it is for channels on which your paid ads appear. In the latter case, you pay Google in the expectation that they put your ads on videos watched by a real audience, not on videos that only exist to game the system.

And this is just as important for the owners of YouTube channels as it is for brands looking to market on YouTube. You don’t want to tarnish your reputation because you have allowed too many fake people to subscribe to your account. Sure, some fake followers will slip through the net – you aren’t going to investigate everybody who follows your channel. But you don’t want an excessive amount. And you don’t want your actions to encourage an explosion of fake subscribers. It is far better to build your channel naturally, following the best practices we will cover later in this post.

We now provide you with a tool that can help you determine the credibility of any YouTube channel. You can check whether an apparently successful YouTube channel is genuine, or whether it has built its subscriber base using less ethical practices. Enter any YouTube channel’s handle into the YouTube Bot Analytics Tool [YouTube Audit - Fake Subscriber & Audience Credibility Checker]. It will give you an excellent guide to the genuineness of the account.

Channel Quality Score (CQS) is a 1 to 100 metric that combines four components: creator, audience, credibility & engagement metrics into one score.

Of course, you can also use the above Fake Follower Checker to do a YouTube Audit of your channel, to establish the audience quality score of the YouTube channel. 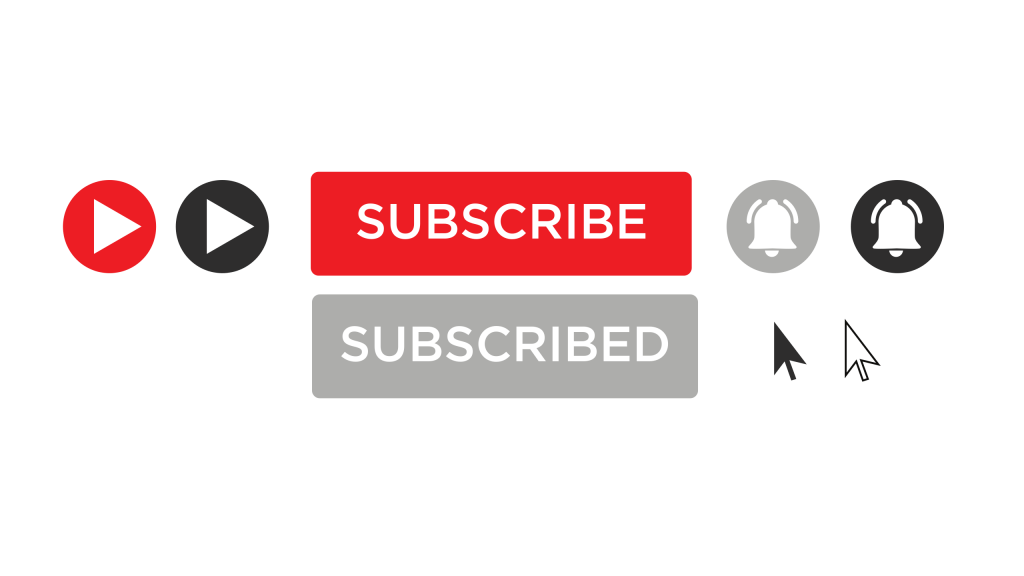 As with most social media and video sharing networks, YouTube suffers from its share of fake accounts and fake subscribers. Wherever there is a way of making money, you are sure to find somebody trying to game the system.

People are far more likely to view videos from popular accounts recommended when they open YouTube than videos shared by newcomers and people with few subscribers. YouTube has a precise algorithm that promotes some videos and ignores others.

There is also the psychological factor of having a large number of subscribers. It makes your account appear incredibly popular with others, and this has the effect of encouraging many to subscribe.

Many brands who look for influencers with whom to collaborate, scrutinize subscriber numbers and are more willing to talk to channels with large numbers of subscribers. They are also willing to pay more to these channels than to those with fewer subscribers.

This means that too many channel owners become tempted to fudge their figures and artificially boost their numbers.

Why You Shouldn’t Buy Subscribers 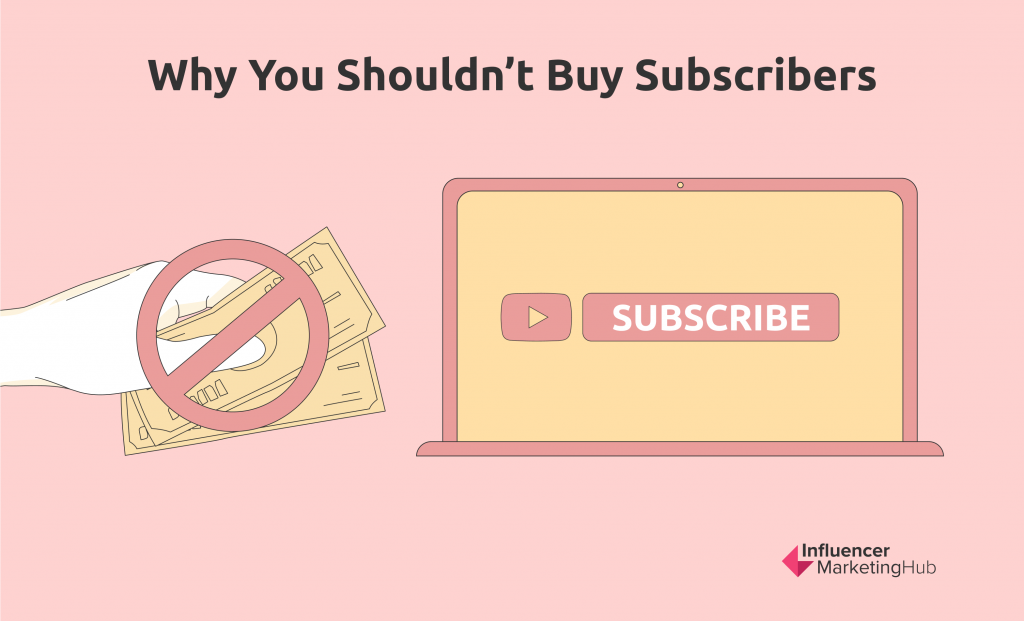 Some people think buying subscribers is an easy hack to YouTube success. Why do all the work when you can increase your subscriber numbers for a few dollars?

But the successful YouTube accounts don’t waste their time on fake subscribers, and nor should you.

There are usually two ways that people game the system:

While this isn't quite as bad as the artificial bots that follow people on other platforms such as Instagram, it is not much better. Your “fake followers” may be real people, but they are as likely to watch your videos as a computer running a bot system. This means that these fake followers will never notice any influencer marketing you may participate in and will never click on any ads on your videos.

How to Gain Quality Subscribers 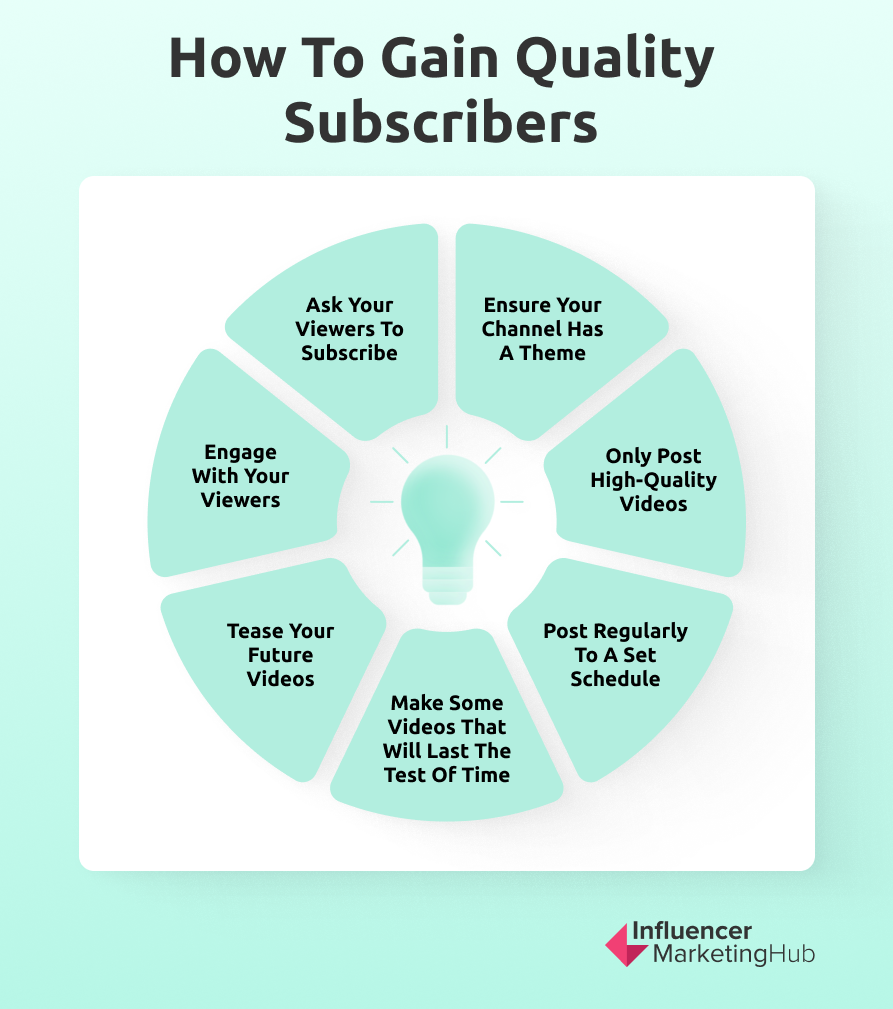 Let’s get one thing clear, however. Subscriber counts do matter, particularly in the early days of your channel, while you grow. YouTube only makes certain features available to accounts that exceed a certain number of followers. However, these need to be genuine followers. And it isn’t that hard to attract real followers if you follow the practices we suggest here.

It doesn’t take much to add a sentence to each video, where you remind your viewers to subscribe, and you can also ask them to turn on notifications for your new videos.

Don’t overdo this, it may put people off, but once per video after you have provided value with your content, will not upset most people, and may encourage some to sign up to view more of your videos.

2. Ensure Your Channel has a Theme

Any influencer will presumably already know the importance of having a theme for their YouTube channel. A common feature of all the top YouTube channels is that they focus on some specific topic; they are not a mishmash of unrelated videos.

This is very important to marketers too. They want to work with those channels that appeal to their target market. This is important if there is no overall theme to the channel.

If you’re just starting a channel, intending to become a successful, influential channel, you need to decide on your theme and focus all your videos on that topic. You can become the "go-to" channel for that topic.

Again, this may seem obvious, but it is essential. To succeed on YouTube, you need to produce high-quality videos.

That doesn’t mean that you need to have a Communications degree and the film-making skills of a Hollywood director. It does mean, however, that you make videos that are clear, preferably high definition, with audible and easy-to-hear sound and not so jittery that your viewers get motion sickness. You need to ensure your videos are easy to watch, and people aren’t distracted from the content by your poor production values. Above all else, however, the video needs to provide value to your viewers.

This will depend on your niche, of course. The technical quality of your production will be less critical for a prank video channel than for a graphics design channel. Some channels aim to educate their subscribers, while others aim to entertain them. You want your videos to work towards whatever goal you have set for your channel.

If you make high-quality videos, people are far more likely to subscribe to your channel – they know that they are likely to gain value from your new videos. 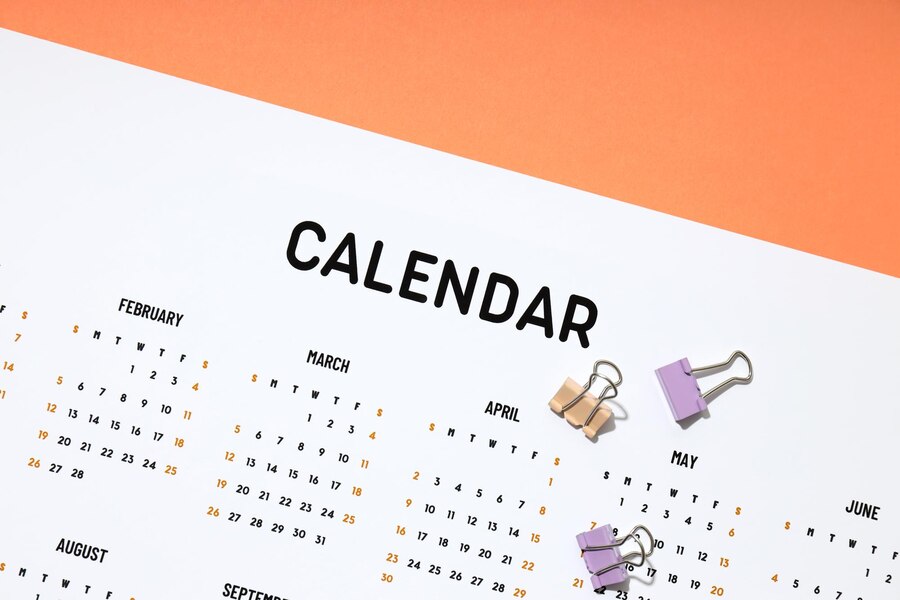 You might notice that the most successful channels post often and at set times. People come to expect new videos from them and look forward to them.

It can be challenging to make many videos, particularly if you don’t have a large team to help you and an endless bucket of resources. However, you are far more likely to gain new subscribers if you are frequently releasing new content.

Several of the social media marketing platforms we have reviewed provide a way to schedule your new videos, ensuring that you don't have to be online when you want your videos to go live.

Take a close look at those channels you consider your main competitors. Make sure that you post at least as often as they do. However, consistency is more important than quantity. You may want to start with a smaller number of video uploads per month and ensure that you can consistently meet that schedule before you ramp up production to your preferred timetable.

5. Make Some Videos That Will Last the Test of Time

While many of your videos will be designed to reflect a set time, it is a good idea to make some that cover topics that are not so time-dependent. Ideally, you want some videos that can provide as much value to visitors in five years as they do today.

Obviously, this depends on your niche. You won’t have many of these if you are in a niche like news and current affairs, or a rapidly changing field like technology. However, a lot of "How To" videos tend to be evergreen. And a prank video made today will probably be just as funny to the next-generation audience watching your videos in five to ten years, as long as humor styles don't change too much.

As mentioned above, you should include a request in each video, asking people to subscribe to your channel. That’s all very well, but you need to give them a reason to want to come back.

If you plan your video schedule, you can end each video with a teaser for the next video you intend to upload. That way, you can give your viewers anticipation for your next installment.

In some cases, where you film videos in advance and may have more than one under production, you might be able to include a short clip from the next video.

7. Engage with Your Viewers

Read any comments people leave on your channel and respond with a thoughtful reply. Your audience will probably give you many content ideas in their feedback.

Of course, engagement on YouTube is far more than just commenting. It also includes Thumbs Up (and Thumbs Down), sharing, and favoriting. People can also pay a fee to Join the channels they like best. The more you engage with other people and channels on YouTube, the more they are likely to engage with you in return. 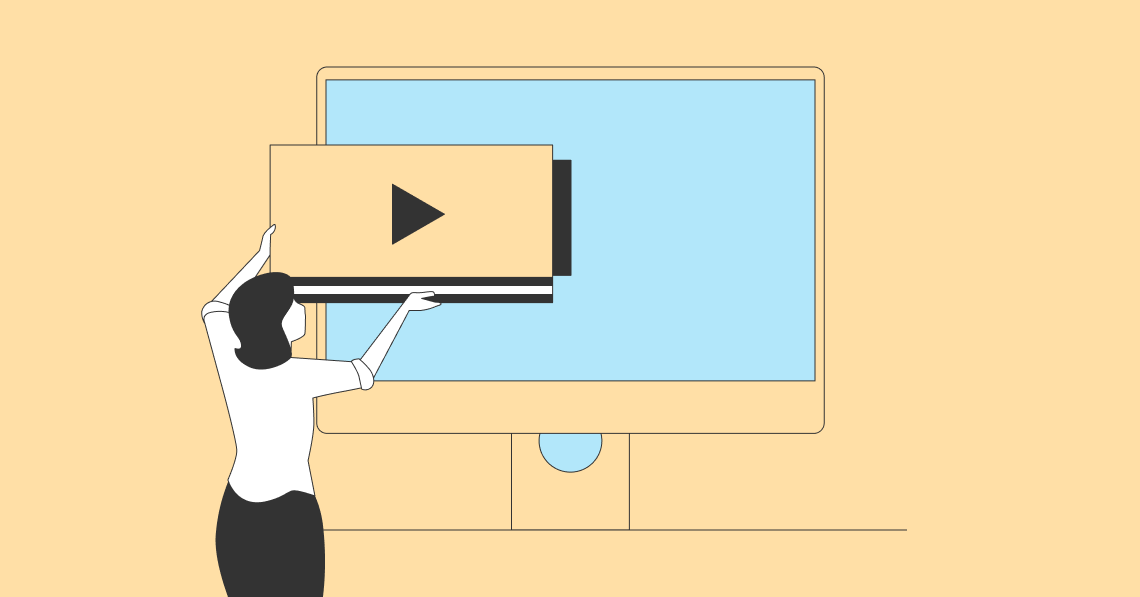 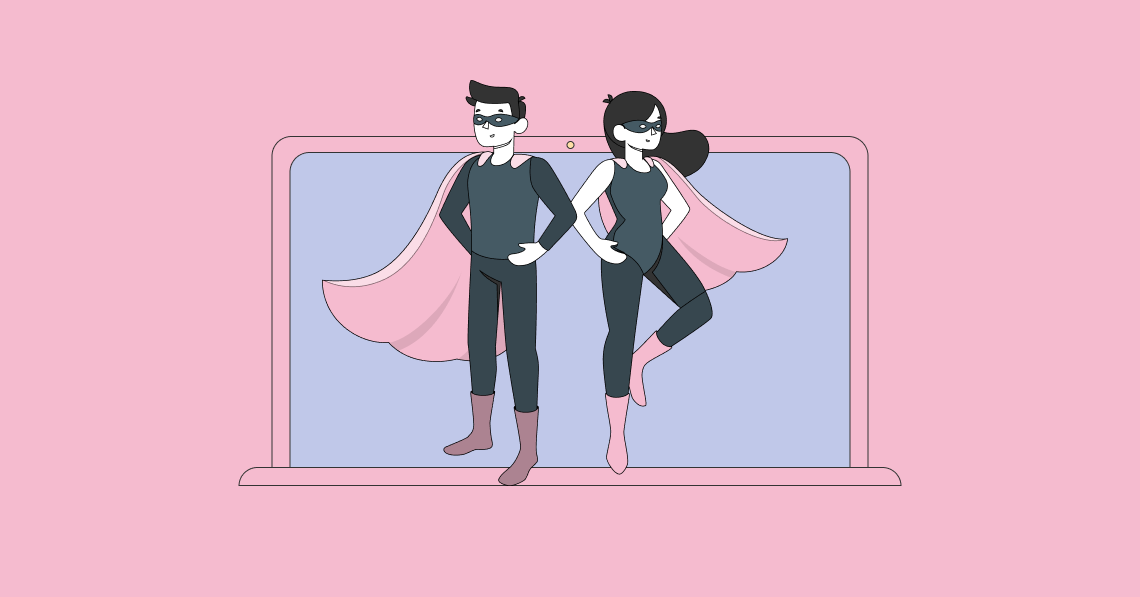 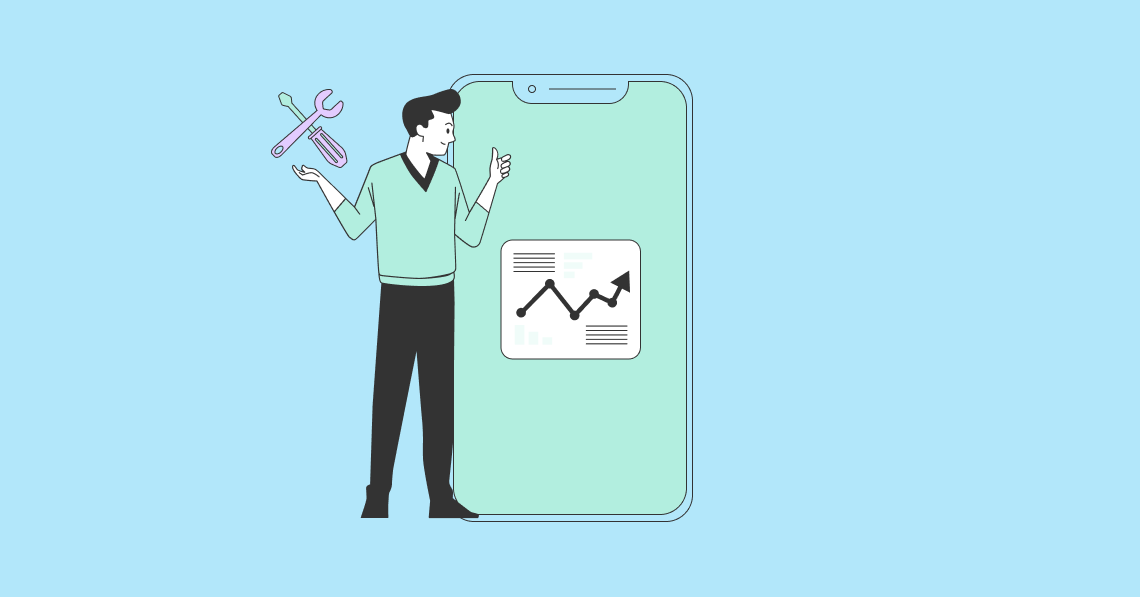