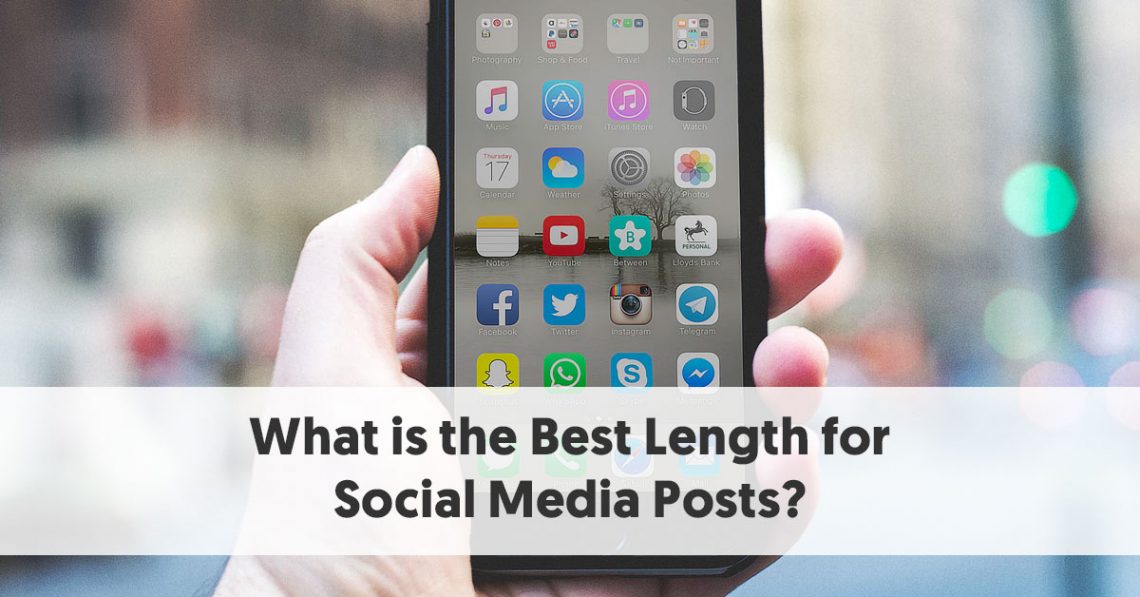 What is the Best Length for Social Media Posts?

Neil Patel looked at this in detail in, Is Facebook Organic Reach Really Dead? He notes that Facebook has changed the way that it measures organic reach. “Previously, Facebook counted Organic Reach as any time an unpaid post appeared in someone’s News Feed. Now, Organic Reach will only give you a hit if your unpaid post actually enters a person’s screen.” Between February 2012 and June 2016 organic reach fell from about 16% to a mere 2%, i.e., if you have 100 followers to your Facebook page, Facebook will only serve your new posts to two followers on average.

So, what is “quality Facebook content” in terms of length? Several studies have found that Facebook statuses of around 40-80 characters perform best. An Express Writers infographic suggests that your posts work best at 40 characters or fewer, earning 86% more engagement than longer posts. Jeff Bullas found similar results, although you could be a little more generous with your writing – posts with 80 characters or less receive 66% higher engagement.

So, if you were thinking about uploading an entire blog post to Facebook, it is probably best that you rethink your strategy.

Some people spend a considerable amount of time analyzing the effectiveness of copywriting and headlines. A single changed word can bring you an entirely new audience or lose you followers, instead.

Remember that a Facebook ad has a somewhat unusual structure. It begins with its ad text. It usually follows this with an image. The Headline is placed directly below the image, and this is followed by the link description.

Adespresso has worked extensively with Facebook advertising over recent years. In 2018, they analyzed a tremendous 752,626 Facebook ads and discovered that the most popular headline length was five words (as it had been three years previously in their 2015 survey).

Adespresso noticed, however, that although the headline has remained the same length since 2015, the length for Facebook ad body text has increased. Indeed, it rose every year from 14 words in 2015 to 15 in 2016, 18 in 2017 and 19 in 2018. Clearly, readers are prepared to read a small amount more at the top of sponsored posts now before they take a closer look at the ad itself.

The final part of a Facebook ad (apart from the Call to Action at the bottom) is the link description. The trend here is the opposite to that of the body text – Link descriptions have shrunk over the last few years. Adespresso has discovered that these have shrunk from an average of 18 words in 2015 to 17 in 2016 to 14 in 1015 and 13 in 2018.

This is because Facebook suggests it should be 30 characters. Otherwise, there is a danger that it may appear truncated. It is difficult to fit even 13 words into the space and not lose some of them.

Your description simply needs to be long enough to make it clear where you are sending people who click on your Call to Action.

Regardless of best practice, there are some character limits imposed by Facebook. You can’t exceed these, no matter how important you consider your message. If you feel you need more, you need to create an additional post (or ad).

However, just because you can use all those characters doesn’t mean that you should. Some people make their tweets almost indecipherable because they include @entries from everybody, they consider important, along with #entries for topics that are remotely similar. You are far more likely to grab someone’s attention, and encourage them to engage, if you limit your tweets to somewhere between 71 and 100 characters.

According to Vanessa Doctor from Hashtags.org, the best hashtags are a single word with only a few letters. She recommends that you restrict your hashtags to being under 6 characters.

Although Instagram captions can be surprisingly long, you won’t want to do this. People come to Instagram to look at the images/videos – not to read exceedingly long captions. You will perform best if you limit yourself to 138 to 150 characters. Social Report suggests that your Instagram captions should be even shorter – less than 125 characters.

Most people quickly scroll through their Instagram feed and only read the captions for posts that particularly interest them.

The same philosophy applies to Instagram ads as to Instagram posts. It’s better to use short, concise copy than long rambling text. Your image or video should sell itself, with only a small amount of additional help from the text. Ideally, you should restrict yourself to fewer than 125 characters for your Instream ads captions.

But in most cases, you shouldn’t use the full 30. For a start, you need to ensure the hashtags you use are relevant to the post. You also want to ensure you don’t use the same hashtags all the time (otherwise you may come under danger of earning a shadow ban).

TrackMaven also analyzed the effects of using hashtags of various lengths. Surprisingly their data showed that hashtags with 21 characters gave the most engagement, followed by hashtags with 24 characters. Hashtags with 22 and 23 characters were also successful. This is considerably longer than the recommended hashtag lengths on Twitter.

Best Number of Characters in a LinkedIn Status Update

The ideal length for a LinkedIn status is around 100 characters. The “See More” button cuts off messages at about 140 characters.

Best Number of Characters in a LinkedIn Publishing Post

Recent changes to the LinkedIn algorithm have discriminated against status updates that share links. This has encouraged more people to use LinkedIn Publishing to create entire blog posts on the platform.

Paul Shapiro, of Search Wilderness, analyzed more than 3,000 posts and found that long-form content performed best here. Posts of 1900-2000 words performed best according to his research.