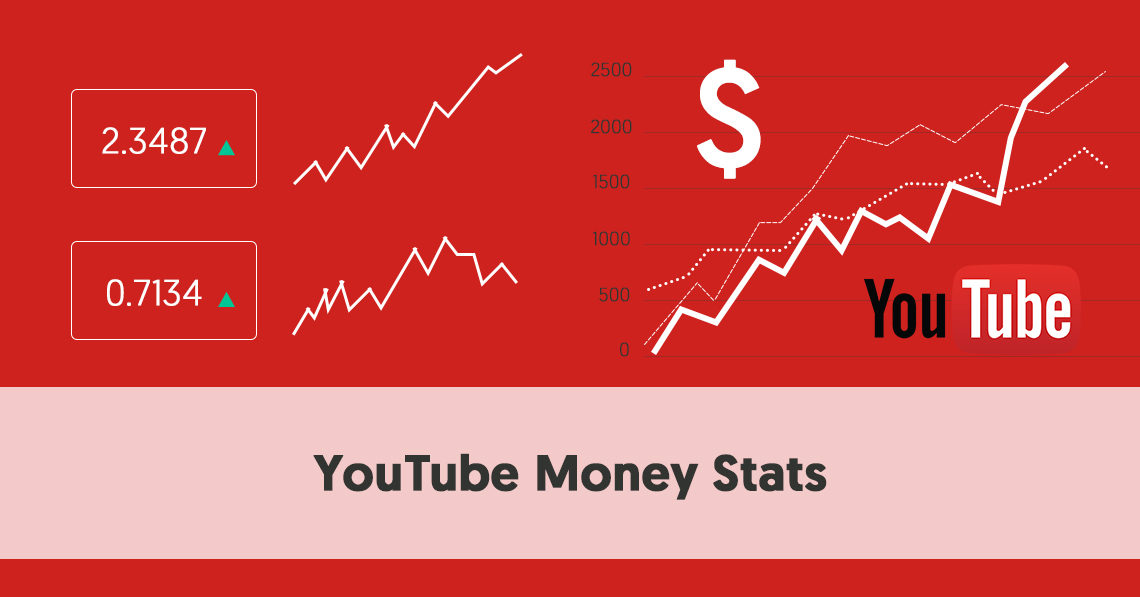 It is easy to look at some of the statistics generated by YouTube’s top channels and believe that YouTube is a license to print money. PewDiePie’s YouTube success and the headline income that he generates from it are of legendary status. Of course, nothing is ever as simple as it looks, and YouTube is not the panacea of your dreams. If it were that easy to make money on YouTube, we would all be rushing in and making ourselves instant millionaires.

When you study the YouTube money stats, you see a clear picture. There are thousands of people trying to make their fortune there, but only those who garner the most views and subscribers manage to make a living income.

When you include all of the subsidiary forms of income, though, the top creators are making good money. Thre is enough incentive for hopeful YouTube creators to persevere, and work hard to reach the upper echelons.

The YouTube money stats even show that some relatively well-known YouTubers only succeed in making a modest tax-paid income. Back in 2014, the New York Times produced an interesting profile on former juggler, Olga Kay, who made her living by making
YouTube videos about gaming, which she uploaded to her YouTube channel, Olga
Jay Games. In fact, for some time she created 20 videos each week for her channel and built up her channel between 2006 and two years ago, at which point she dropped back to just making the occasional video.

However, like most successful people in the medium, she looks at this as Gross Earnings for a business. Moreover, like all businesses, there are expenses that have to be paid before she sees any of the money. YouTube itself keeps 45% of the ad revenue generated by its partners.

Ms. Kay quickly learned that a good portion of those remaining earnings needs to be plowed back into the business for it to continue. For instance, she would not have been able to produce 20 videos per week alone, so she had wages to pay. Her editing bills came in at $500-$700 per week. There would have undoubtedly been other business-related expenses.

Like every other form of earnings, she would have to pay tax on her net YouTube earnings (after YouTube’s share and your business expenses were deducted).

These are relatively rough numbers, but it does demonstrate that YouTube is not necessary the panacea to all of your money problems. Yes, you can make a living there. However, it’s hard work.

So how are some of the best YouTube channels performing for their owners? Obviously, we only have estimated figures available, but those at the top still make a good income. Of course, quite a few of the most subscribed YouTube channels are official Vero music channels, so we will exclude these from our calculations. Likewise, we exclude YouTube category channels such as Music, Gaming, Sports, Movies and News, despite their high subscriber numbers.

These are our best guess YouTube money stats for the top YouTube original channels. The estimated yearly income figures are courtesy of SocialBlade (using the middle of their range estimates). We have estimated, for the purpose of these stats, that each channel plows 50% of their pretax income back into their business for future video creation and other expenses.

Over 53,000 companies get access to our exclusive influencer marketing news

Receive exclusive content that you won’t find anywhere else other than our monthly subscriber mails. Not only that, but you’ll be the first to access our new content, tools and offers.

NOTE: The Ellen Show’s YouTube stats were unavailable at the time this post was written, and the channel was showing a bizarre -69M views for the last month. This is probably because the channel was undergoing a view audit.

NOTE: This channel is connected with the HolaSoyGerman channel, so presumably any profit from this channel will end up there.

NOTE: The KSI YouTube stats were unavailable at the time this post was written, and the channel was showing a bizarre -2.2B views for the last month. This is probably because the channel was undergoing a view audit.

If you are surprised that the Estimated After Tax Profits of these channels is not higher, it is important to remember that these only include Adsense earnings. The more famous a channel is, the wider the range of other money-making methods there are available to it. PewDie Pie, for instance, would make substantially more than the estimated $1.22M profit shown here, because he can command considerable sums for sponsorship, endorsement, product placement, and merchandise.

We look at the variety of ways that the owners of successful YouTube channels can make money in How To Make Money On YouTube: 9 Ways Influencers Monetize Their Youtube Channels.